Zombtober / Apocalypse Me: Maggie get your gun 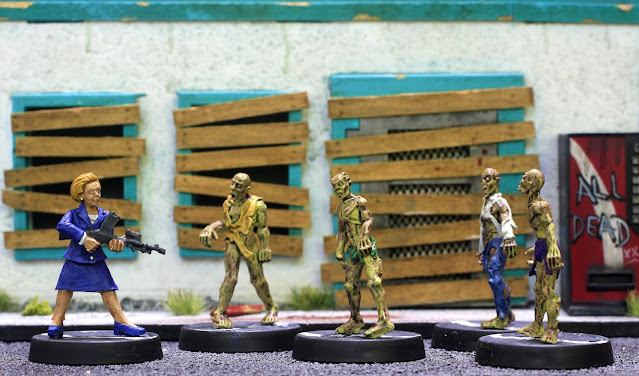 Your eyes do not deceive you: that is indeed former British prime minister, baroness and milk snatcher Margaret Thatcher wielding a Bren gun as a small horde of former cabinet members zombies attack.

I bought all five minis from Brigade Games. I got an email off them last week that included a coupon code for 10% off, so I popped over there to see what they had, and next thing you know I'm the proud owner of four dead people and a... well, technically five dead people, seeing as Maggie shuffled off in 2013 and was memorialized in this superb Steve Bell cartoon: 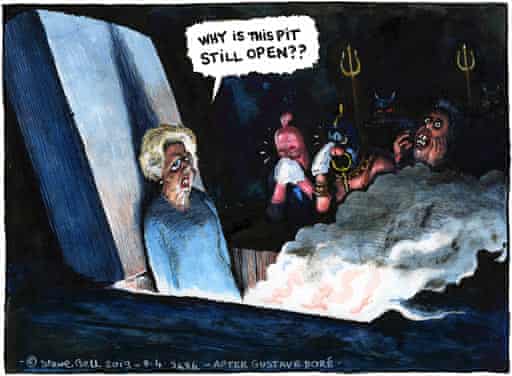 Maggie is part of Brigade Games' Post-Apocalyptic range and when I saw her I had to buy her. I'm in no way shape or form a fan of hers and never have been; seeing the economic devastation caused to my grandparents' South Wales Valleys town thanks to the closing of the local coalmine and steelworks, along with the wider economic and societal divides that have lasted till today thanks to her policies, does that to a person. But the mini is pretty awesome and I wish Brigade Games did other British politicians. I'd happily pay to have a shotgun-toting Harold Wilson or John Major armed with a cricket bat.

Politics over, back to painting. 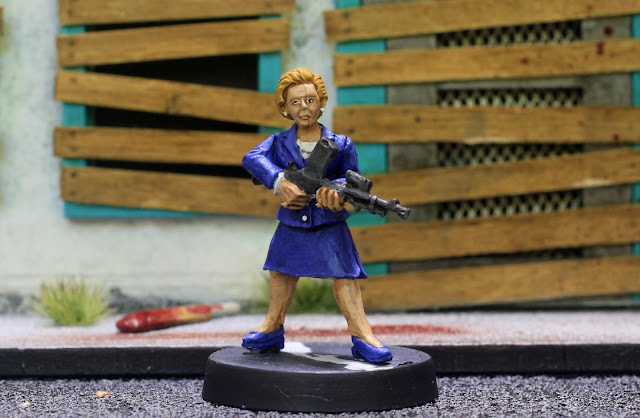 Tory blue is the obvious way to go, so Mags was painted with Vallejo Game Colour Ultramarine Blue, which for some reason is more purple than Vallejo Model Colour Ultramarine Blue. I don't understand why this is seeing as VGC Goblin Green is identical to VMC Olive Green and VGC Terracotta is the same as VMC Dark Red. Anyway, after the blue went on it was washed with Blue Tone and then highlighted with more Ultramarine and White.

Her skin is painted with my mix of Heavy Flesh and Basic Flesh, and the Bren gun is just Ash Grey shaded with Black Wash. Her famous bouffant hairdo is Gold Brown with some Soft Tone.

Thatch was really easy to paint and took all of about 45 minutes. It's a great sculpt and really captures her likeness. 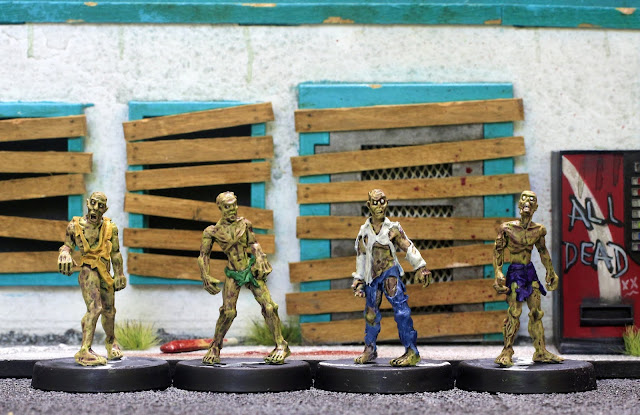 The zombies are from Brigade Games' Drug War Z range. It's a skirmish game that involves the DEA, Mexican Policia, drug cartels and zombies. There are five sets of zombies, and I bought the  Zombie Men I group.

They were really easy to paint and took about 20 minutes each. After painting all the skin with Dead Flesh I plastered them with Green and Purple tones to give the skin its manky, rotting look. Once all that dried it was just a case of choosing colours for what's left of their clothing; from left, Yellow Ochre, Mutation Green, Off-White and Blue-Grey, and Warlord Purple. Some basic shading and highlighting and they were ready to eat brains.

All five figures are based on the usual modelling paste painted as a road surface. I think it took longer to wait for the paste to dry then paint, shade and highlight it, paint the rims and finally varnish the bases than it did to paint all four zombies.

Finally, one thing I love about buying from smaller companies is the personal touch: 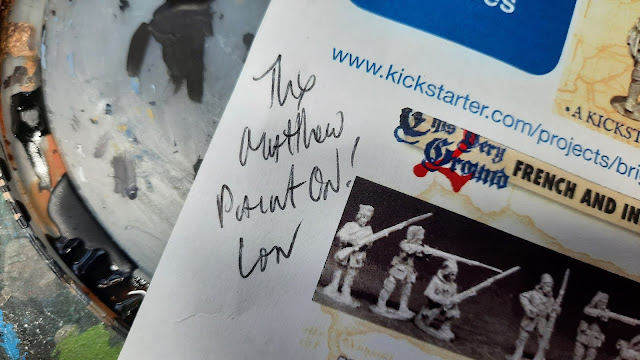 A handwritten note pretty much guarantees I'll be buying from Brigade Games again.