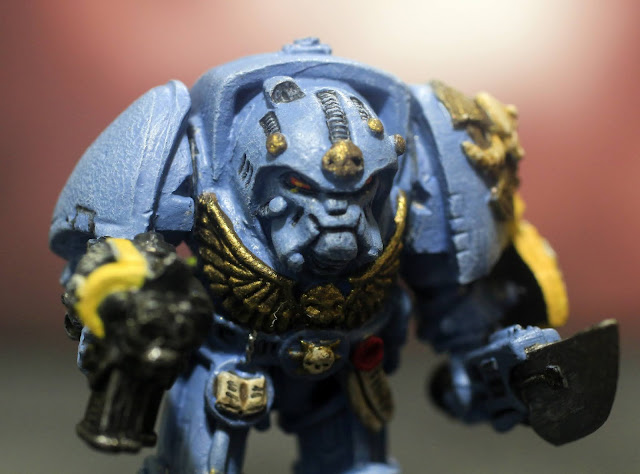 Despite being ecstatically happy at getting a Terminator Captain on Ebay, I wasn't exactly happy with how much he cost. I swore off buying Oldhammer minis for a while, but that lasted all of two months when I found this classic mini selling for the astonishingly cheap price of $12 including shipping. 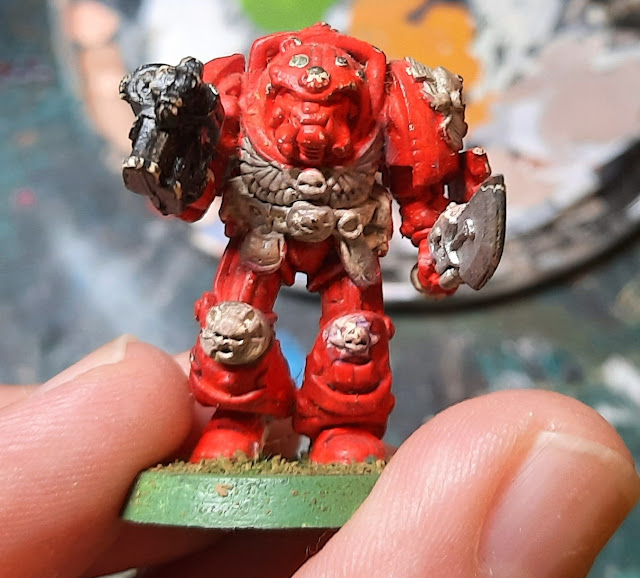 Here he is just after being freed from his padded envelope. Looking at the very thick coat of what appears to be Citadel Blood Red or Red Gore over a yellow basecoat, I'm pretty sure he was once a Blood Angel. I love that he's still on his original 25mm base with an old-school Bilious Green rim and a sprinkling of vintage 1990s flock. 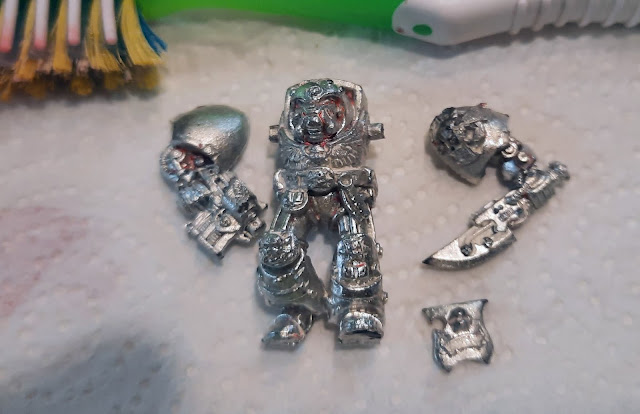 Luckily the decades-old superglue didn't take too much force to break and I was able to disassemble him pretty easily. Once in pieces, and with the base cut off and slotta tab removed, he spent a relaxing couple of days in a bath of Simple Green to strip the paint.

He's stripped back to his original metal for the first time in probably 30 years. The toothbrush took care of the bulk of the red, and I had to resort to scraping out the nooks and crannies as best I could with my X-Acto knife. I couldn't get all of it, but it's not going to be noticeable (he says hopefully). Happily I noticed the large bit on his force axe and removed it before priming.

Then the fun bit began: choosing which chapter to paint him. I know these days Librarians wear blue armour but I'm old-school. I did debate doing one of the more obscure chapters such as Invictors or Destroyers, but then decided that as I've already done the other original "big three" chapters — Blood Angels, Ultramarines and Dark Angels — I'd go with the fourth, the Space Wolves. 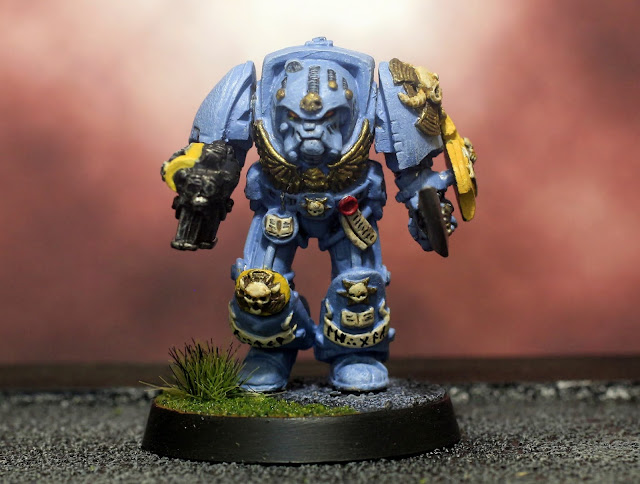 So, after being primed with white he was given a basecoat of Blue Grey. I've never really liked the blue tint to Space Wolves' armour but I'll go with it for now. Once that dried I was going to shade it, but realised I have no idea which wash to use. Black? Blue? Grey? I decided to check with the font of all knowledge, aka the 1988 Space Marine Painting Guide, which includes instructions on how to paint a Space Wolf terminator...

...and there's no mention of shading at all. This is so old-school that it looks like Citadel Inks didn't exist when it was written, so I just left the whole shading thing and moved on to drybrushing the armour with a mix of Blue Grey and Ghost Grey.

As an aside, just look at the names of those paints. Skull White. Mithril Silver. Sunburst Yellow. Chaos Black. Add Titillating Pink and Snot Green and chuck some Ned's Atomic Dustbin on the stereo and my nostalgia trip would be complete. 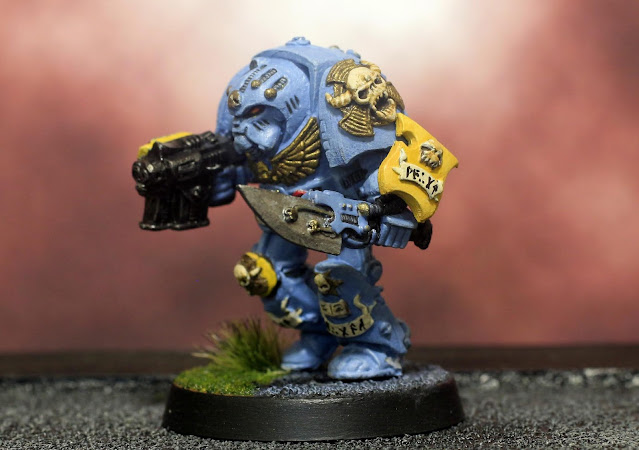 With the bulk of the armour done it was time for the details. And there's a lot of them, although happily not as many as the Captain. Anything that was going to end up Bronze was given a base of Burnt Umber, anything that was going to be Deep Yellow, including the shield, was based with Yellow Ochre and so on. The scrolls, pages, skulls and purity seal were all given a thin coat of Off-White in preparation for Ivory and Bonewhite.

After all the details were finally finished, I outlined some of the armour panels and helmet lenses with Black Wash and painted the storm bolter and force axe Black and highlighted it with the apt Gunmetal. I decided to do the lenses orange, using Wild Rider Red. 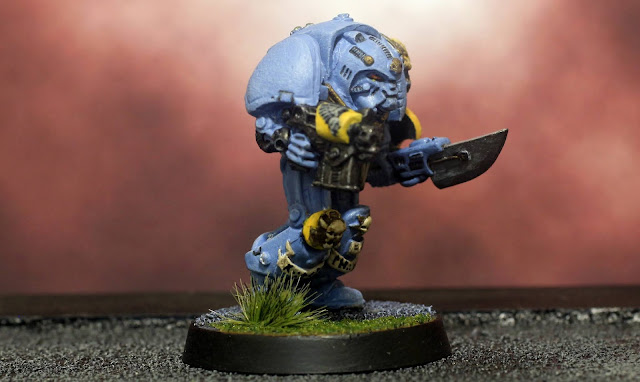 The final part was to paint something on the scrollwork on his legs and shield which, thanks to the angles of his legs, aren't the easiest bits to get to. I had a Terminator Librarian back in the day and I'm pretty sure I managed to do an awful job of painting "ULTRA" on one leg and "MARINES" (original, I know) on the other. As the Space Wolves are basically Vikings IN SPAAAAAACE I decided to do some crappy runes instead. I've got an aversion to runes thanks to them being basically hijacked by bloody Nazis, so I just made them up as I went along.

Unfortunately I don't own any Space Wolf transfers, and painting that logo is so far beyond me it's in another universe. 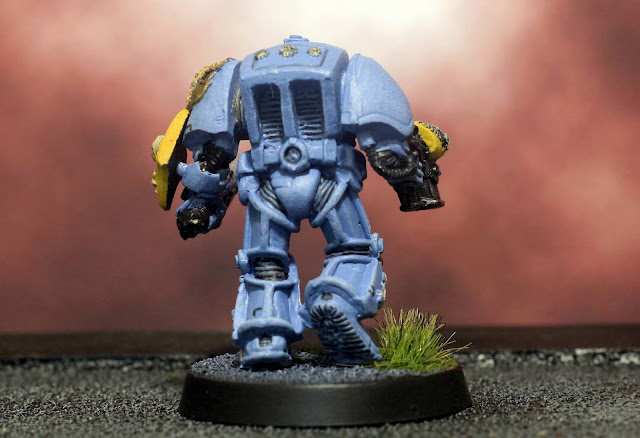 Now for the base. I did it Red for a strong contrast to the grey armour and dirtied it with Strong Tone, and glued on a piece of sprue for that Space Hulk look. After a coat of varnish he was ready to join his brothers (and two traitors) in the display case.

Well, what I forgot was that his legs are too close together for him to stand aside the piece of sprue, and ripping it off would just bugger up the base. So I started again, doing part of it with green flock and a tuft and the rest with sand painted grey. It does look like he's taking a pleasant stroll down a path, but it makes a change from the usual urban/sci-fi/grimdark bases.

More Zombtober stuff to come just as soon as my orders from Brigade Games and Hasslefree show up in the mail.