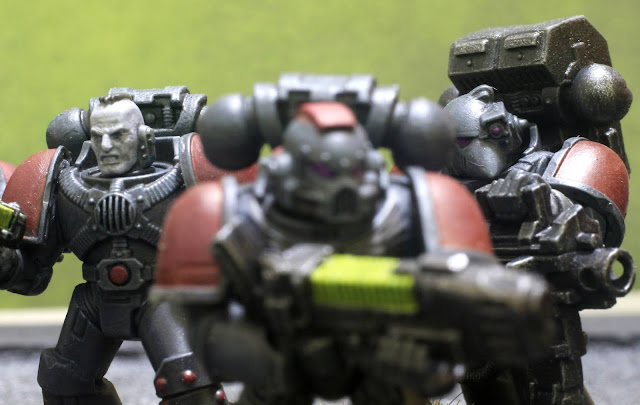 Bear in mind I haven't actually bought any of the Kill Team rulebooks as they're hugely overpriced and, as the latest one's only just come out, are probably full of errors. I have been able to find basic rules and datacards online so they'll do for now.

Anyway, I picked Space Marines (or Tactical Marines, or "Firstborns" — YUCK! — as they're called these days) because I have a ton of bits lying around, or at least I thought I did... more on that later. In theory Ashen Claws are a doddle to paint: just dark grey and dark red.

In theory, that is, because I used Rustoleum Dark Grey spray primer to save some time, and it dried very rough and bumpy. Oh crap, it's the Little Sisters of Purification all over again. It was also quite powdery and I could rub it off just by brushing my finger over the plastic. Wonderful. Keith has also had issues with Rustoleum primer and I for one am going back to using the cheap stuff from Dollar General.

So they were pulled apart, dunked in Simple Green for three days, scrubbed clean and simply painted with Vallejo Dark Grey as the primer and basecoat, shaded with homemade black wash, highlighted with a mix of Dark and Ghost greys, and their red bits painted with Black Red highlighted with Dark Red. I picked Purple for their helmet lenses because why not?

They all have 30mm bases painted with Agrellan Earth and decorated with Army Painter desert tufts. 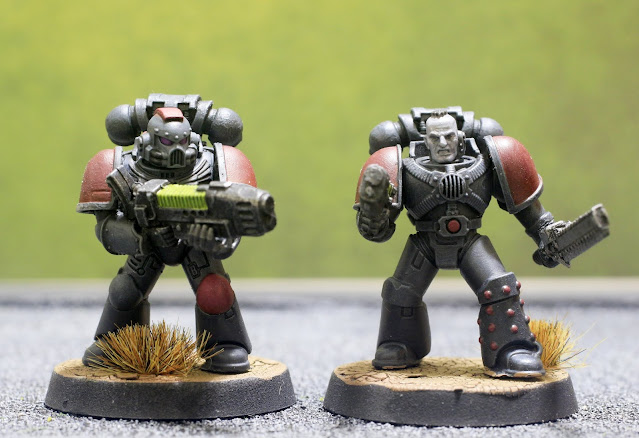 Here's the gunner and sergeant. Kill Team allows you six Tactical Marines, with one sergeant, one gunner, one heavy gunner and three basic bolter boys. Sarge is armed with a plasma pistol and chainsword, and the gunner has a plasma gun but could also have taken a melta or grav gun. For reasons that seem bewilderingly complicated to me, the plasma gun is the best bet, so I had to order one from Ebay and wait a week for it to show up. Yay. 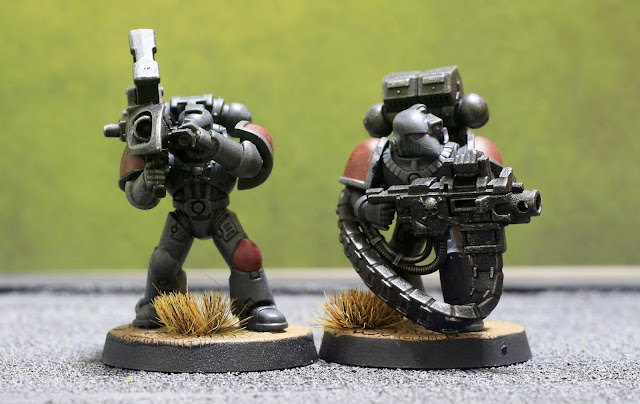 You can only have one heavy gunner in a kill team, but I built two to get some flexibility and because I love the old-school rocket launcher on the left. By all accounts the heavy bolter is the better option, but krak missiles can help more against heavily-armoured targets. Either way they're both cool. 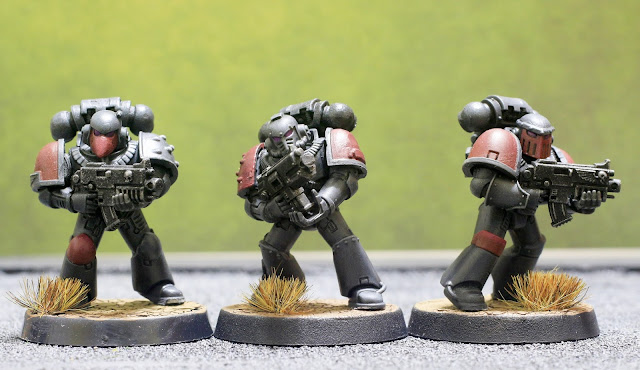 The three Marines armed with boltguns is where I hit the issue with bits. I had the helmets, I had the torsos, backpacks, legs and shoulder pads, I had the guns... I was just running short on matching arms. Luckily I was able, with much searching, to find two pairs of Mk.VII arms and one pair of Mk.III arms in a totally separate tupperware box to all my other bits, so at least I didn't have to go running to bloody Ebay again. As you can see, the arms on the Marine in the center didn't quite work but I managed to make him look like he's slamming a fresh mag into his gun. Phew, got away with that one.

So why Ashen Claws? I like their backstory. The Ashen Claws were the 18th Company of the XIX Legion Raven Guard, and during the Great Crusade they were sent off to the Ghoul Stars for some reason. While they were gone the whole Horus Heresy kicked off, and the Ashen Claws were simply forgotten about. These days they're considered by the Imperium to be renegades, although they haven't turned to Chaos.

Thanks to having no official supply chain, they wear older armour from Marks III through VII and barter with other lesser-favoured Chapters such as the Carcharodons for weapons, ammo and armour. They also have a damn-near unpaintable chapter emblem, so I didn't even bother with it.

Thanks to the community at r/killteam for the help getting me on my feet with these guys as I had no idea what I needed when I started thinking about a team. All I have to do now overcome my crippling social anxiety and lack of confidence and go to Bennington for a game!