Zombtober: A quartet of corpses 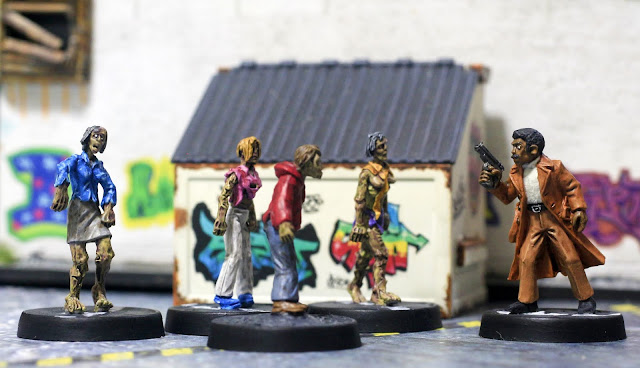 Calvin gets ready to take out some zedheads who are stinking up the alley behind the convenience store.

Just so you're not all kept in suspense: still no sign of the Hasslefree minis so I've emailed them again. I've even gone through the undergrowth and dead leaves around the bottom of our mailbox in case the package was dropped, but no luck. So here's a short post (and there was much rejoicing) about some festering females and one mouldy male. 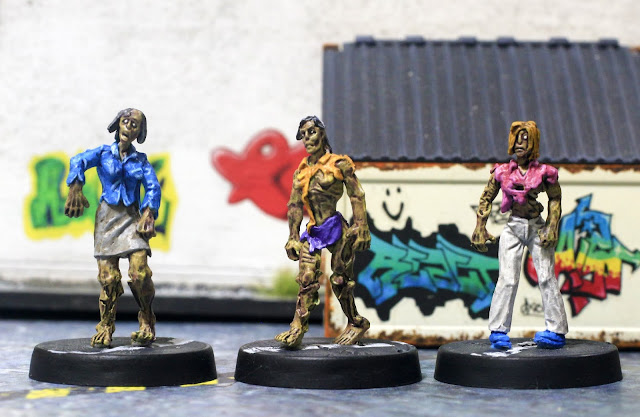 These three lovely ladies are from Brigade Games' Drug War Z range. There's supposed to be four, but I got sent a duplicate (the one on the right) and if there's one thing I can't stand it's duplicate figures. So I didn't paint it, which now strikes me as pretty stupid.

From left, they're painted Deep Sky Blue/Ash Grey; Deep Yellow and Violet; and Pink, Off-White and Andrea Blue. If anyone knows why Andrea Blue is called Andrea Blue, let me know in the comments. 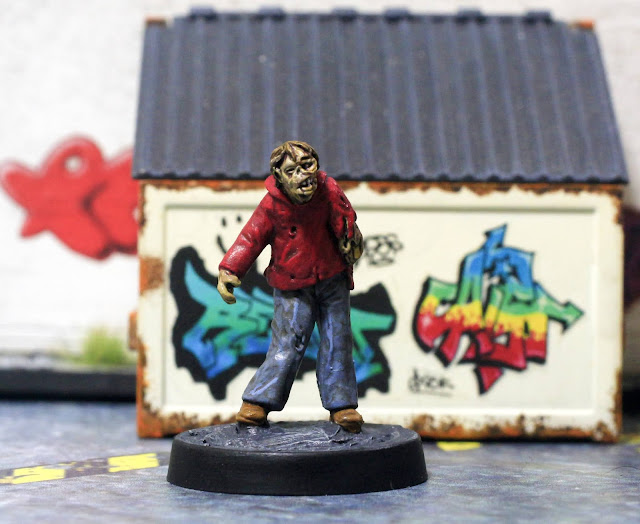 This is Brian. I also got him from Brigade Games, and his actual name is Brian the Zombie. I painted him pretty much how he's painted on Brigade's site, with a Red hoodie and Blue-Grey jeans. Part of his skull is showing through his face, so that got a dab of Bonewhite and some Sepia Wash, as did the bit of humerus sticking out of his shredded arm.

Brian has a small integral base (AAARRRGHHH) so I stuck him to the plastic Reaper base and had to build up the modelling paste around him. That's why, like Roberto, he doesn't have a stripe on his base.

As per usual they were straightforward to paint. All the skin was done first with Dead Flesh, then mottled with Green Tone and Druchii Violet. Once that was dried it was just a case of picking colours for their clothes and painting, shading and highlighting them in turn instead of doing them one at a time.

So that's me out of zombies again. With no sign of the survivors I guess I'm going to have to get on with the Apocalypse Me scenery piece I've been avoiding for a week. 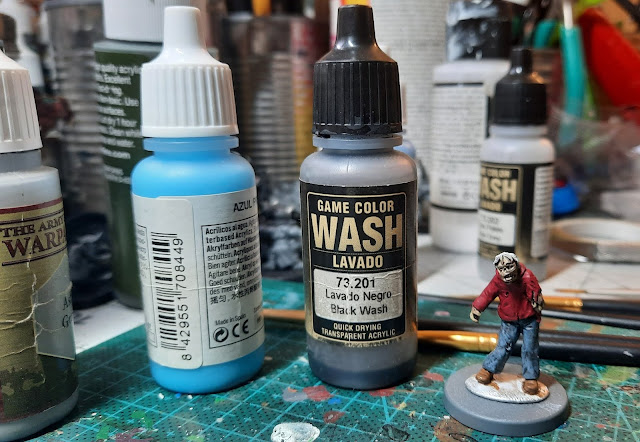 Some more sad news: my bottle of Vallejo Black Wash ran out today, so I'm either going to have to order some more from Amazon or pop to Bennington and shell out for Citadel's equivalent. Does Citadel even make washes any more?