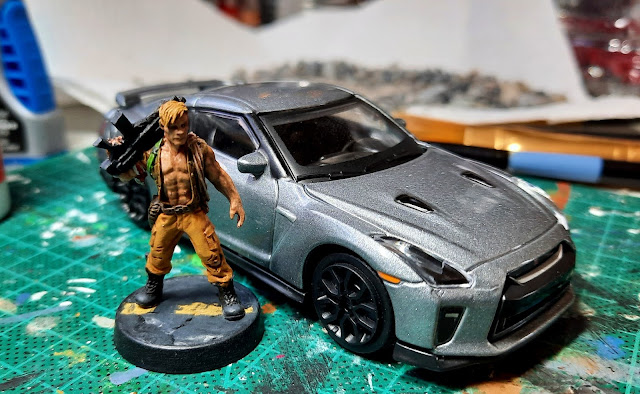 Since reading Keith's No More Room In Hell after-action reports and checking out the awesome scenery he uses for his games, I've wanted to get a car to just... well, wreck, basically. I've read that 1/43 scale is best for 28mm minis, and with that in mind I picked one up from my local Dollar General.

The store only had four BBurago 1/43 scale cars in stock, and they were all sports cars: a Lamborghini, a Porsche, a Ferrari and a Nissan GT-R. I chose the Nissan as you're more likely to see one around, and $1.99 later I was its proud owner. Hans is hanging out next to it looking all cool.

But it's way too nice and shiny to be used as post-apocalyptic scenery. Let's burn it. 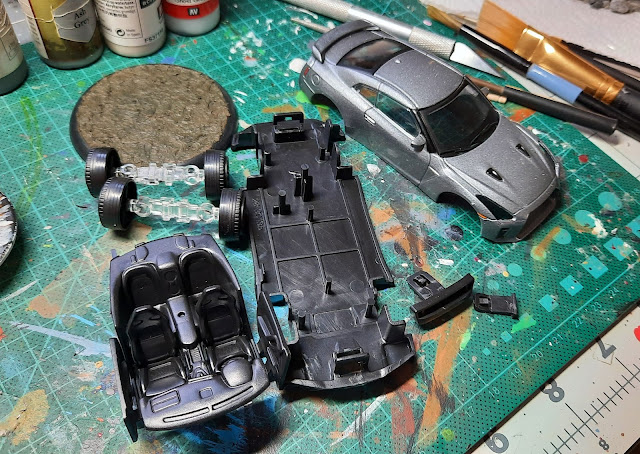 The first thing was to take it apart. There are no screws holding it together, and after much mucking about and googling I discovered how to unclip the chassis. The glass and lights were knocked out and binned and the wheels put to one side before I clipped the chassis, radiator and body back together and took it to the paint shop. I left the seats and dashboard bit out as they're not known for surviving fires. 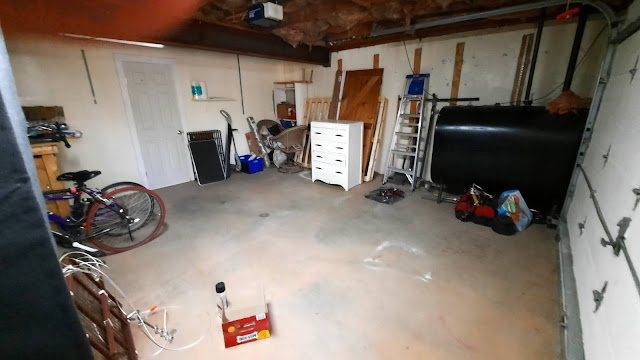 Yes! We finally have an empty garage. Unfortunately this means we have a house full of boxes, but whatever. You can see my makeshift spray booth in the foreground: a Milk Bones box with its top cut off. 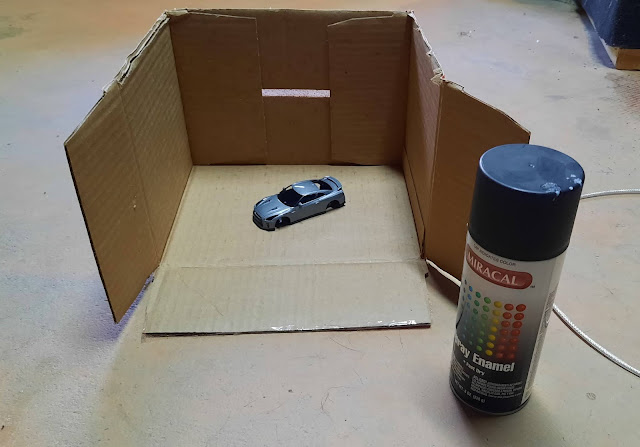 Here it is in close-up with a can of dollar store matte black spray paint ready and waiting. I haven't spray painted anything since that wall my Epic army in 1991, so this was going to be fun. 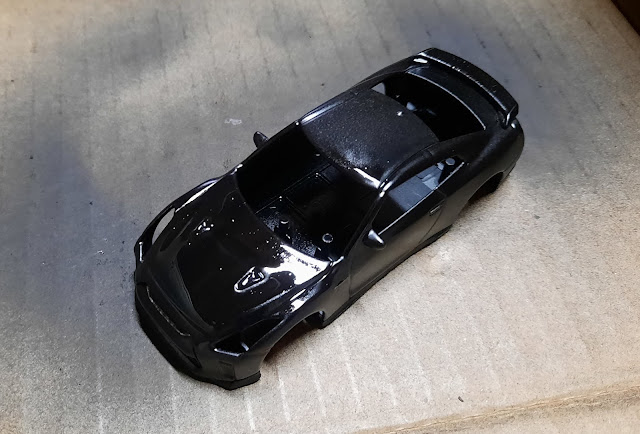 The bonnet got a heavier coat as I wasn't too sure how much pressure to put on the can's nozzle. After giving it a decent coat of spray I left it to dry. I probably missed a few spots but I can touch them up with a brush; after all, this car isn't going to end up in a showroom. I unclipped the GT-R again and sprayed the chassis and inside of the body. It was at this point that I realised the bumpers and lower trim on a real GT-R are plastic and would be burned out of existence, so I could have saved 30 seconds of my life right there. 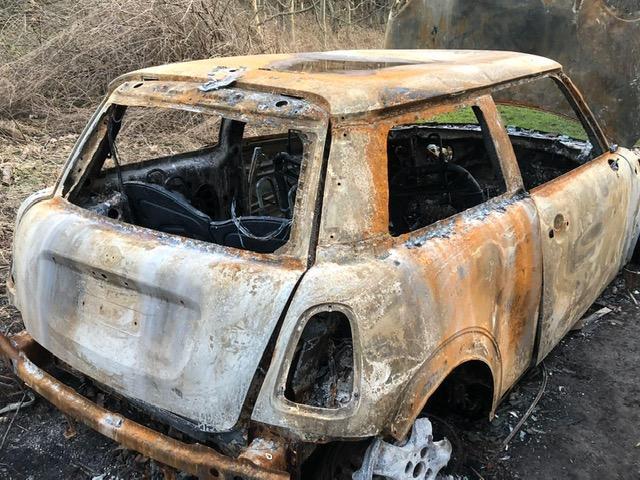 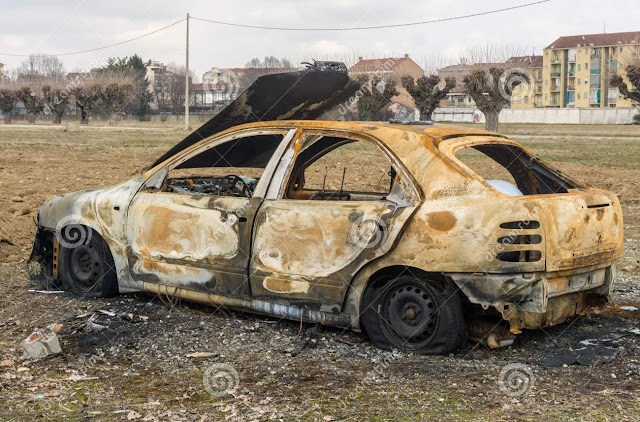 I tried looking up "burnt out GT-R" but all I got was pictures of wankers doing donuts, so I'll use these images for reference. Ironically I used to own a Mini and a Fiat Brava. One thing that didn't occur to me before googling "burnt out car" is how white they all are, and there's me with a can of matte white spray paint. Classic. I really need to start researching shit before I paint. So do I respray it? 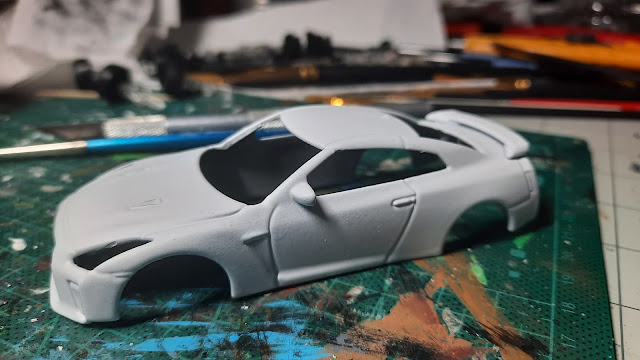 Yes, I did. OK, let's stick to Resolution 3 and actually do some painting. Going by the reference pics, I really only needed three or four colours: orange, brown, black/brown and the white undercoat. I decided to use inks for transparency, so I got my Vallejo Black, Sepia and Burnt Umber washes, Army Painter Soft, Flesh, Strong and Dark tones, and my homemade rust wash ready. 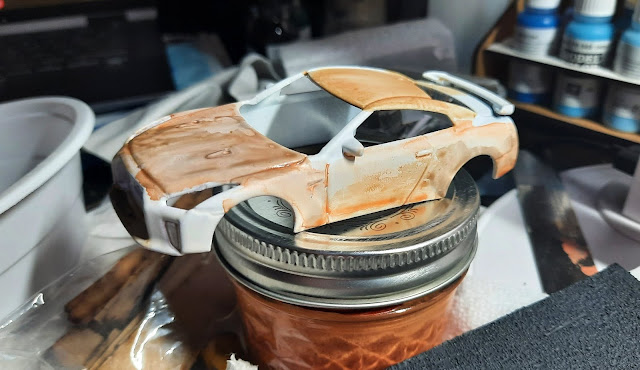 I started with the rust wash and begain brushing it on. Immediately I hit problems: first, the brushstrokes were showing, and second there were a few parts of the car where the wash simply wouldn't take and just beaded up. Rather than do my usual "stop, overthink, put it aside" thing, I just kept going. I left the car on the windowsill to dry in the fresh Vermont breeze as Alicia's hairdryer is upstairs and I'm a lazy git. 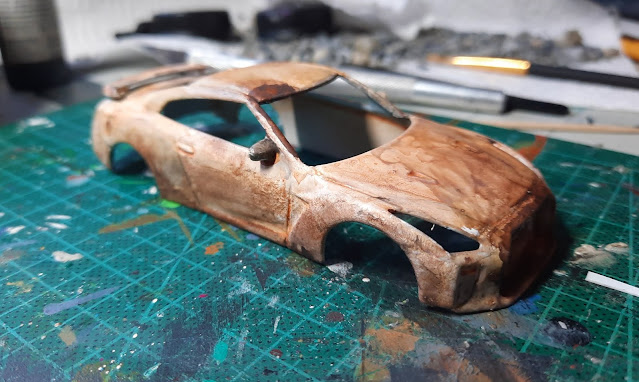 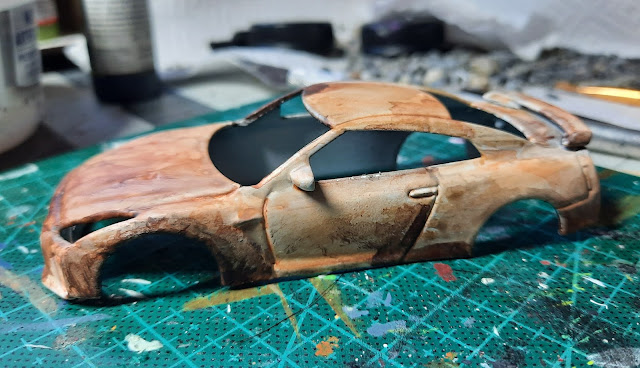 Once it dried I hit it with some Sepia Wash, which caused even more brushstrokes. I came up with the idea of daubing on some wash then wiping it around with a bit of paper towel, and that seemed to help. But doing the whole thing with washes was starting to seem a pain, so I grabbed my Dry Rust, thinned it down, and started using that for the darker bits. I also tried Grey Wash and this helped tone down the white bits. I really wish I'd thought things through better in terms of which order to do the colours but it looks OK and I'm happy with it.

I'm still working on the car, so this is going to be a two-parter. But have you spotted the mistake I made? I didn't until I was putting the pics on this post, and it's going to be fun to sort out.