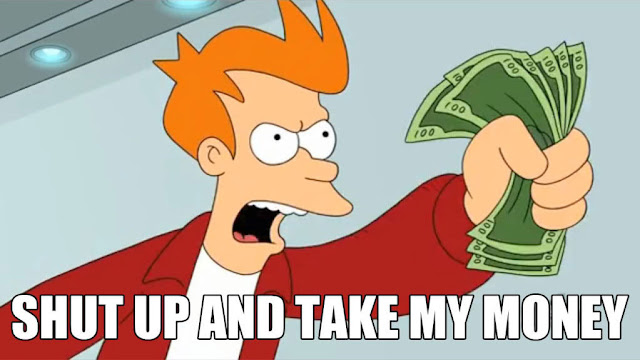 An artist's impression of me when I saw this mini on Ebay. 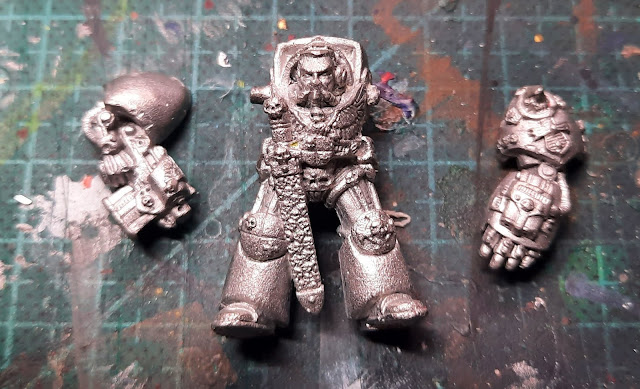 Just look at it. One of Jes Goodwin's finest. The original Terminators were awesome sculpts, but the sheer amount of detail on the captain elevates it above the rest. The skull-encrusted sheath and the grenade launcher built in to his power fist are fantastic, and his right kneepad is quartered as this was back in the day when Space Marine captains were allowed personal heraldry. He's even got the Rogue Trader-era captain's insignia as part of his Crux Terminatus. Speaking of that... 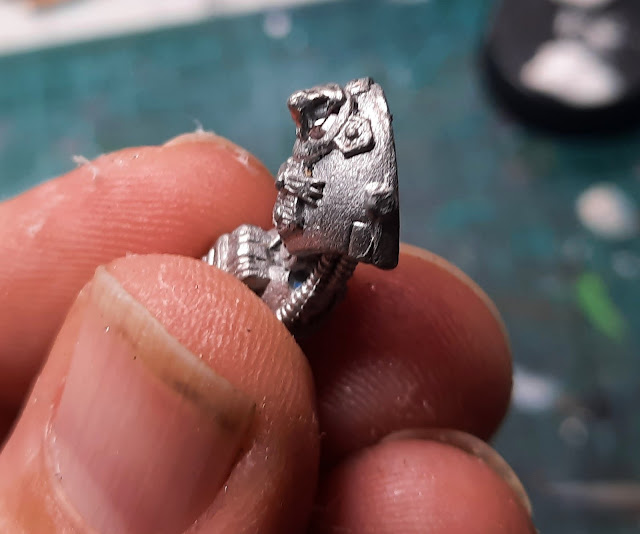 ...what the hell is this? A moulding error? The skull is totally deformed and sticking out. It's like a blob of solder has been put on the emblem. I checked the Ebay listing again and this is what it was like in the seller's photo, so it's not as if they scammed me by substituting a crap arm. I'm also sure this isn't a recast as there are tiny traces of paint on it. I guess it's my own fault for hitting the "buy it now" button about three-tenths of a second after seeing the item. Can I repair it? 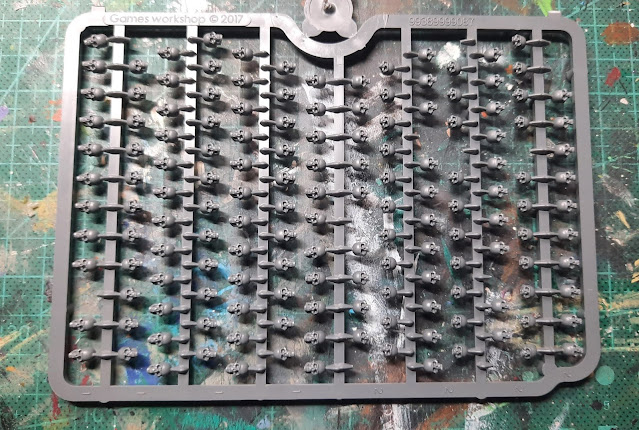 The Citadel Box of Skulls has been lurking in storage for ages, but now it's time to dig it out. Or at least this sprue full of human skulls. 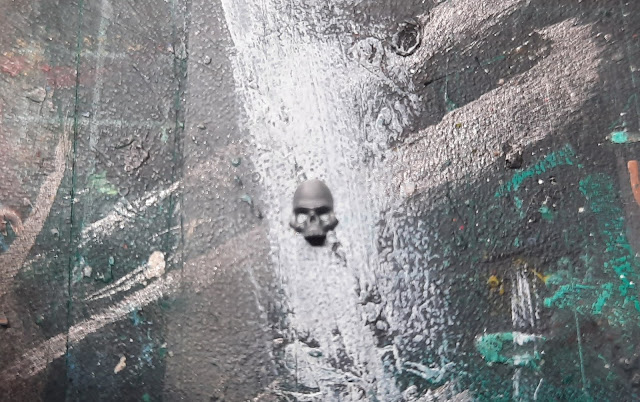 After three attempts I managed to slice the face off one thinly enough to work without destroying it. 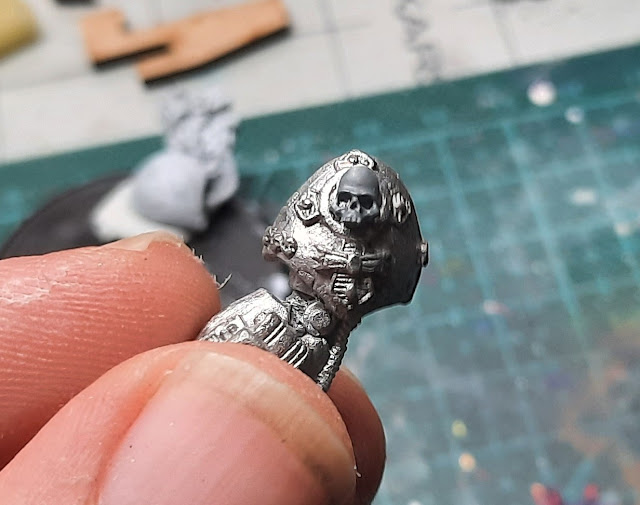 I used my side cutters to snip off as much of the blob as I could, then my Xacto knife to carve off the remainder. With a blob of superglue and a lot of swearing I managed to get it in place. Some greenstuff around the edges filled the little gaps and after priming white it looked OK.

I've never painted a Blood Angel before; the closest I've come is a Blood Raven and a Flesh Tearer. My personal way of painting red is to go with Vallejo Red with Flat Red highlights, along with some Carmine and Vermilion if needed. The old-school way is to paint them bright, bright red and highlight with orange, so I'm going to give that a shot. But wait! I own a pot of Citadel Mephiston Red! 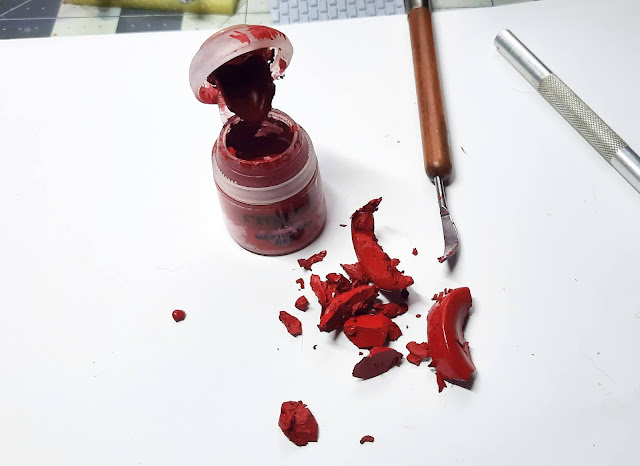 All my other Terminators had the trim — pipes, aquilas, joints, honours and so on — painted first, then the Chapter livery went on. For some reason I did this one the other way around, and I wish I knew why.

After priming him white I gave him two thin coats of Red. It covers really well and in no time he was basecoated. Once that dried I cracked out the Flat Red, which is pretty bright. One tutorial I found on painting old-school space vampires said to use Vermilion as the main colour as it's closest to the old Blood Angel Orange. It's definitely on the orange side of red, but having used it before I know it takes about four coats to cover properly.

Once again I had a hell of a time lighting the figure, but just go with it. 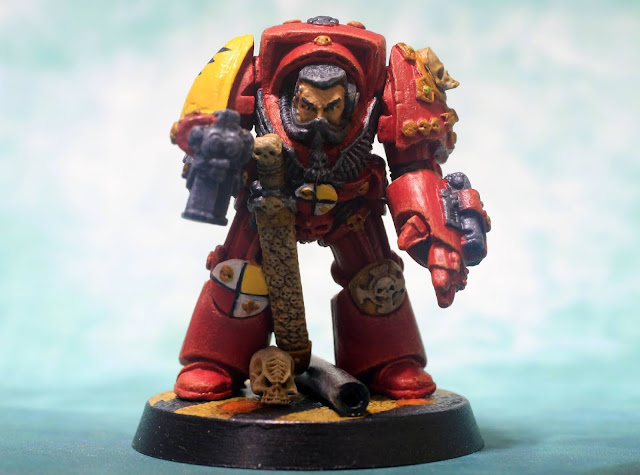 Vermilion was used for the first highlights, and as I thought it took three passes just for it to show up against the Flat Red. And then I cracked out the secret ingredient: Citadel Wild Ryder Red. It's the perfect hot orange for highlighting this figure, which is why I bought it in Bennington last week. The highlights were finished off with Sunny Skin Tone, which is more yellow but still has a bit of orange. 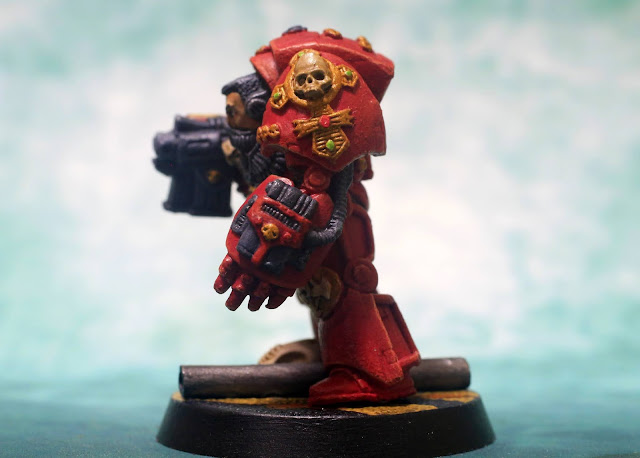 His armour's basically done, so on to the other bits. The armour joints were painted Neutral Grey and shaded with Black Wash as it's easier than (and I prefer it to) the old "paint black, drybrush silver" look of yesteryear. All the gold bits were given a coat of Filthy Brown and Brass and shaded with Sepia Wash. The pipes/tubing were painted Dark Grey and also shaded with Black Wash as I didn't trust myself to drybrush them without getting grey paint on the red. The aquila was painted Black Grey and drybrushed with Neutral and Ash greys. 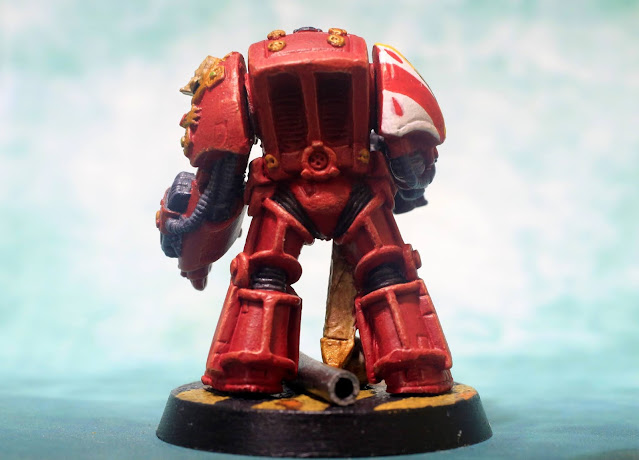 Praising this figure for its "sheer amount of detail" is one thing. Painting that sheer amount of detail is something else. I did his grenade launcher with more Dark Grey and painted part of it Flat Red and that finished his left arm, so yay. His right kneepad is Flat Red, Golden Yellow and White, to reflect the colours I'll be using for his heraldry. After finishing his hair and face I painted his sword with Bonewhite, Sepia Wash, Silver, Brass and Flat Brown. That was his body done, so I gave it a coat of varnish and put it to one side. The I had a panic attack because I couldn't find his left arm before remembering I'd glued it to his body.

His storm bolter was painted Dark Grey, the cover given about four coats of Flat Red and the skull/wing was done with more Brass.

And now it's time for the heraldry. 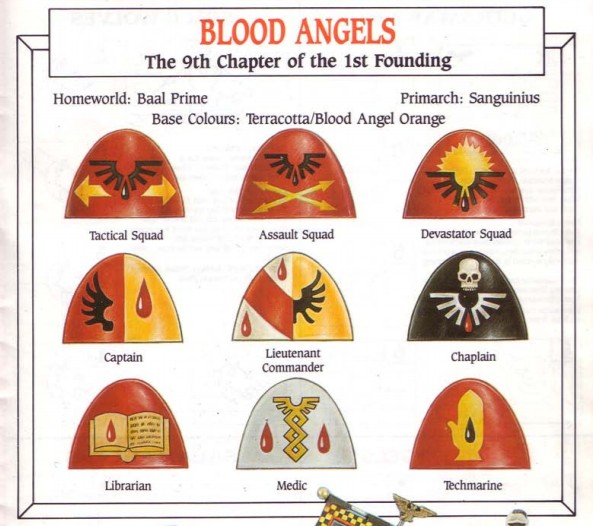 Follow me, kids, to the days of Rogue Trader and the original Space Marine Painting Guide. Not only does it have the then-official instructions for painting Ultramarines, Salamanders, Blood Angels and Space Vikings Wolves, it also includes the old rank markings and acceptable personal heraldry. I chose the Captain's because duh, but then — for reasons that are a mystery to me — I decided to go with the Lieutenant Commander's. 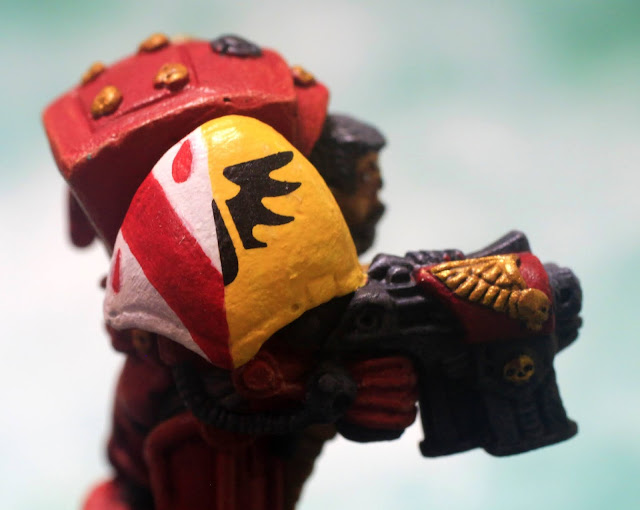 I think we can agree that painting occurred. Actually it's better than I thought it would be, and the only real hassle was cutting a Blood Angels transfer in half. After the fun and games I had with these decals when I did my Dark Angels Terminator I was expecting the same problems, but it worked. I was hoping to use some blood drop transfers but they won't fit, so I had to paint what I can charitably describe as blobs in their place. The Golden Yellow worked really well, which given my recent issues with yellow was a shock.

His base is my last Games Workshop 30mm one, painted in black and yellow hazard stripes in homage to the old-school power fists. I stuck a small piece of pipe on it to fill the slotta gap and added a genestealer skull as a nod to Space Hulk.

Here he is with the rest of his Termie mates. From left, Death Guard, Ultramarines, Blood Angels, Dark Angels and Emperor's Children. I'm well happy with him, especially the heraldry. He's not quite as orange as I wanted but right now I don't care as he looks awesome. And he's got more skulls on his armour and weapons than either of the traitors to the left and right!