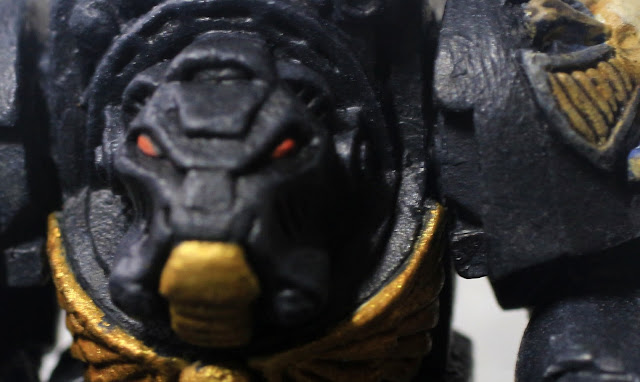 WAIT YOU SAID DARK ANGELS WHY IS HE BLACK??!?
After painting my Ultramarine Terminator, I was totally stuck as to which Chapter to paint the other one. After looking over my Space Marine collection I realised I haven't painted any Dark Angels yet and Dark Angel Terminators, known as the Deathwing, wear white armour instead of the regular black green. Now I usually hate painting white but I'm happy to give it a shot. Then again, back in the dim dark past any colour scheme seemed to be OK. Francis Ellyard chucked the Space Marine Painting Guide out the window with her classic Terminators in 1990: 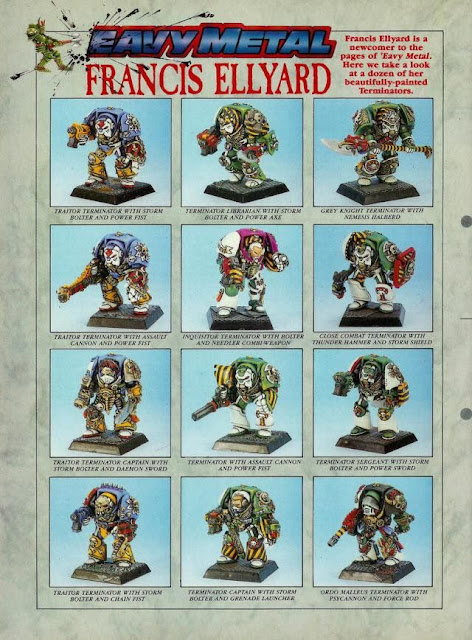 Deathwing Terminators originally had a Native American theme, as described in this background story and this page from White Dwarf: 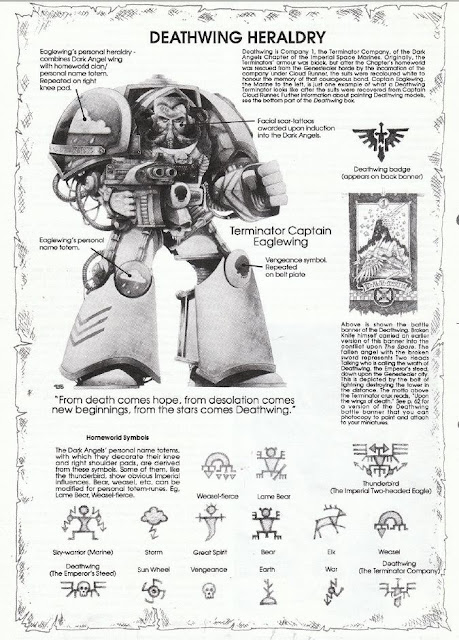 I'm pretty sure that the Native American theme has been retconned out of existence. After googling around, it transpires that the white armour changed to a bone shade at some point. The online arguments about which it should be are amazing. Some people go apeshit — apeshit — at the mention of bone. I'm sticking to white, or at least ivory, as shown in the original art for the 1990 Deathwing board game: 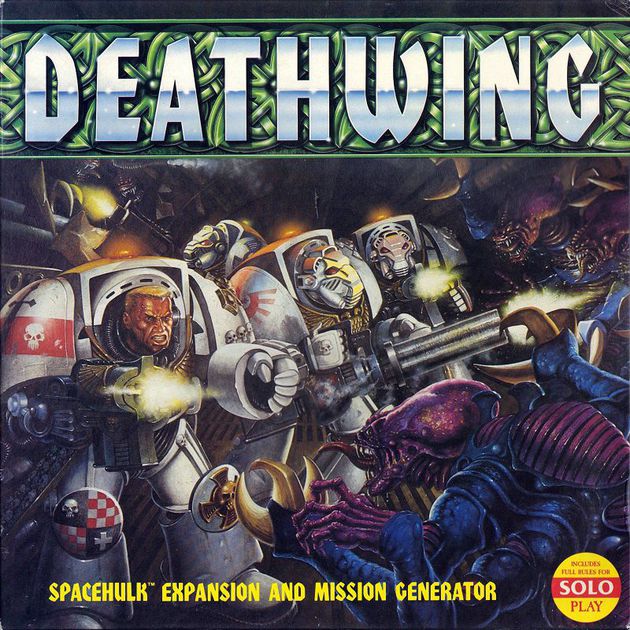 And this Marine from the first release of Mk.VII armour in 1992: 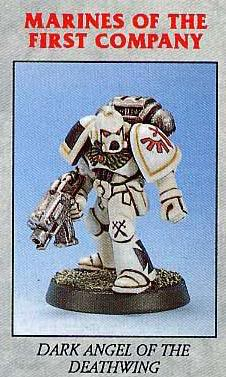 Note the distinct lack of purity seals and random skulls.
I have at least four shades of white, so I should be good to go. OK, I have spent way too much time researching and writing about a Chapter that I really don't give a monkey's about. See what I mean about overthinking things?
Welll... all the above (except the top photo and first sentence) was written in late August last year. After doing some basic painting on him I had to pack him away for the big move to New England. Last week I dug him out of his hiding place in the storage box, and... 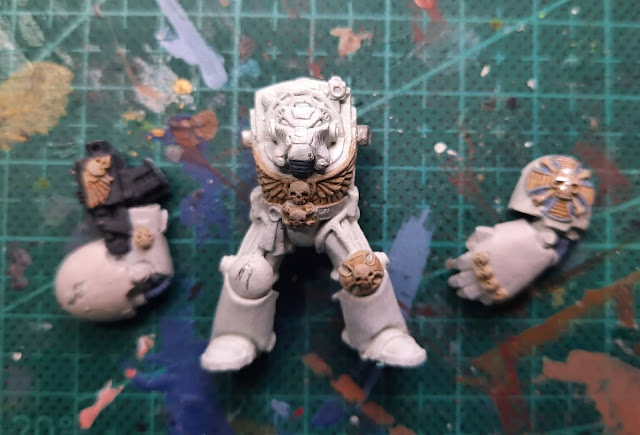 Oh dear. A cross-country trip and six months in a box hasn't been good to this chap. He's been bashed around a bit during the move, with scratches on his kneepad, helmet, shoulder pad, Crux Terminatus and power glove. There's also dings on his back. Crap. I cannot remember which shade I used for his armour — White? Off-White? Silver Grey? Ivory? — or the colour of his Crux Terminatus. I could strip the paint and start again, or paint him as a Blood Angel or Crimson Fist or whatever, but then an idea struck... 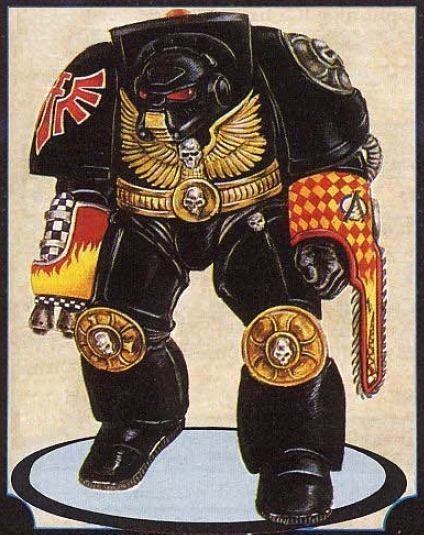 Why not go old old-school and paint him in the Dark Angels' original black? This image is from the back of the 1989 Terminator boxed set, some of the best sculpts Citadel ever released. Deathwing hadn't been invented back then, and the sudden mysterious change of Dark Angel armour from black to green was in the future. Black paint will totally cover the white, and I don't have to redo the armour markings, just touch them up a bit. 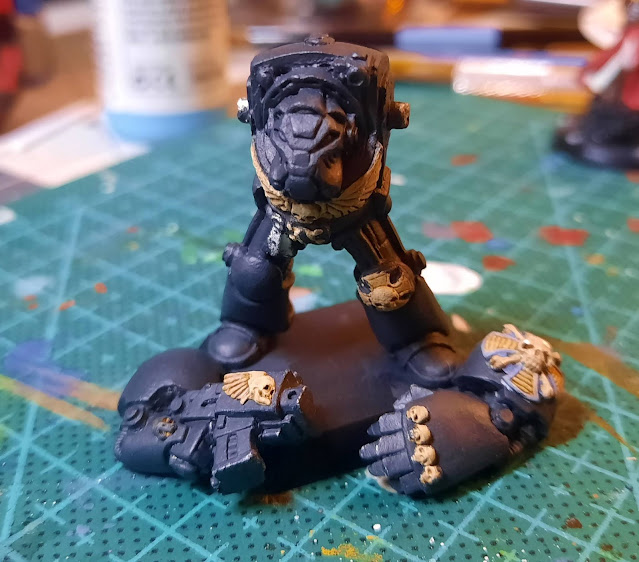 Here he is, slathered in Black Grey, and I can already see a bit I missed under the Terminator honours on his left shoulder pad. Yay. I used Black Grey, which is basically as close to black as you can get, so I can use Black Wash to shade him and Dark Grey for the highlights. I was going to leave the chest aquila and Crux Terminatus on his kneepad in bone, but checking the illustration shows me they're gold, so some Light Brown, Brass, Sepia Wash and Polished Gold did the trick.
The bone bits were tarted up with some Bonewhite and Sepia Wash and his storm bolter was given a once-over with pure black to differentiate it from the armour. 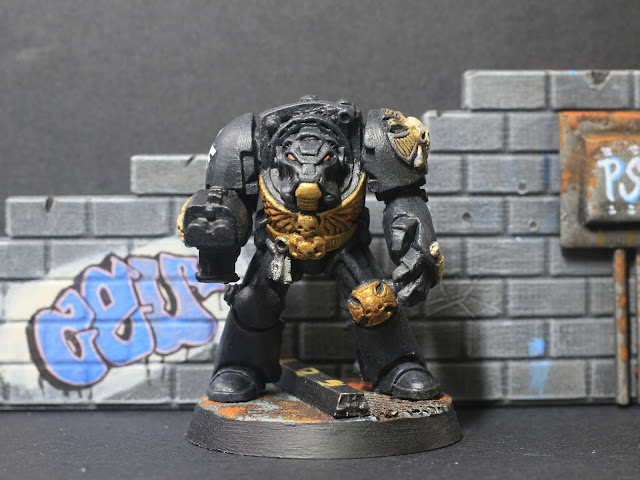 Here he is, looking a bit incongruous in front of a brick wall. Only after taking these pics and reading over this post did I realise I'd forgotten to paint his Imperial participation trophy purity seal so I've done it with a dark green wax bit as a shout-out to the newer Dark Angels look. 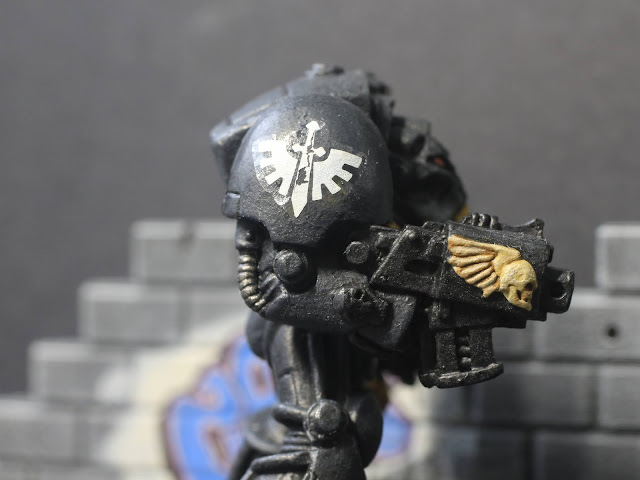 The chances of me painting a Dark Angels badge is zero, but luckily I have some transfers that came with a bunch I bought on Ebay. Unluckily they're not the original red. You only get five winged daggers, and this is the fourth I tried; all the others disintegrated when I took them out of the water. This one was doing fine until I gently moved it about three nanomillimetres to the right and the sword decided to fall apart. I could not be arsed to try again, so it'll do for battle damage.
So, am I happy with my decision to go old old-school? Yes and no. He does look good but I really should have stripped the white paint off and started him from scratch. It was a pain to make sure all the white was covered and I kept spotting tiny dots in nooks and crannies that I'd missed. But overall I'm happy with him.
His base is way better than my Ultramarine Terminator's. I looked up some tutorials on Space Hulk-style basing and used one of them. It worked so well that I redid the Ultramarine's base too: 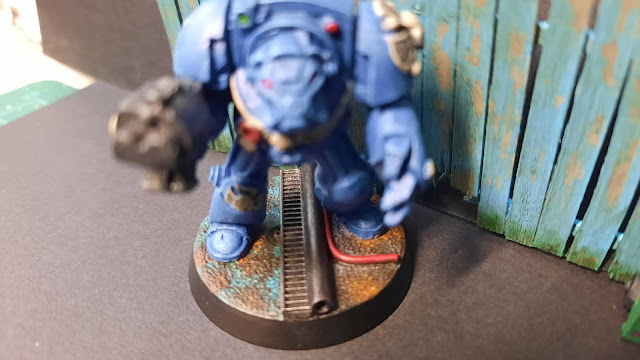