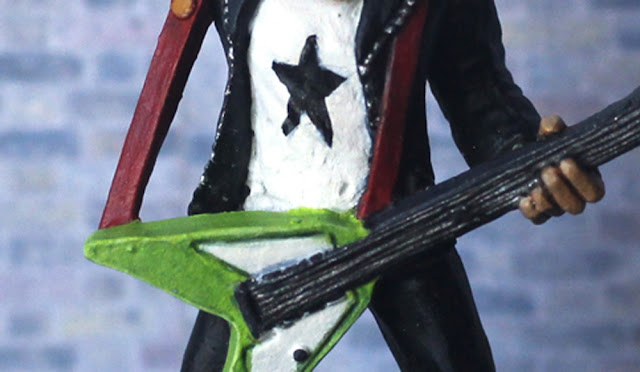 The range and selection of minis on Reaper's site is so ridiculous that you can spend hours looking for the perfect figure. On the other hand, you could just pick one that looks cool to bump you over the magical free shipping total. Sid was that figure. 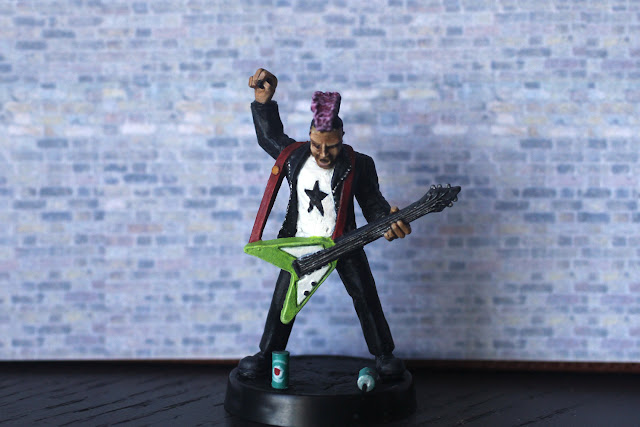 I'm not sure which tabletop game calls for a mohawked punk holding a Gibson Flying V, but I'd love to find out. Black was the obvious choice for his clothing which made him fairly easy, if a little boring, to paint. His jacket was given three or four washes of Army Painter Blue Tone to give it something of a sheen to simulate leather, but then I went and forgot about doing the same to his trousers. Whoops.

I used google image search to get an idea of what colurs Flying Vs came in, and found this auction page. I liked the green but in order to make it more punky I went for a colour best described as "snot". Its official name is Army Painter Jungle Green. In a desperate attempt to break up the black, I used Flat Red on his guitar strap and Demonic Yellow for the small badge thing. The strings are in Plate Metal and were an utter bugger to paint. I didn't realise at the time that that the Flying V's neck should be brown, so painted it black. Bear in mind this was about five minutes after looking at images of the guitar online... 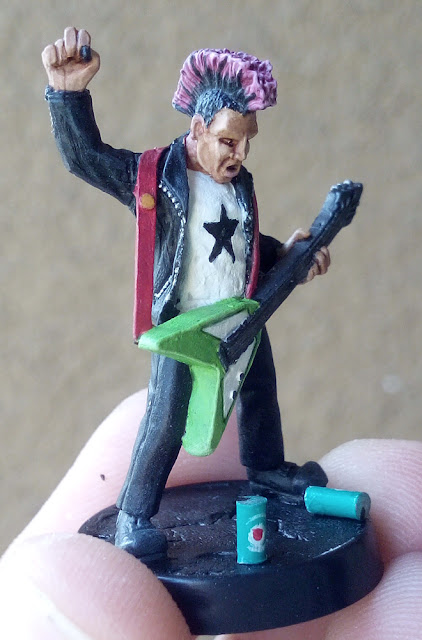 Here's a side shot of him I did with the phone that shows off his mohawk and wonderfully expressive face. Like Louise, I think his skin tone is a tad too dark but it works. I used the google to get an idea of colours to use for his hair and went with Vallejo Warlord Purple and Pink. I tried layering the paint to get a smoother transition between the colours and broke up the pink by extending some of the black to the top of the mohawk.

His T-shirt gave the opportunity for some fun, but unfortunately it's me doing the brushwork. My original idea of painting a Union Jack lasted all of three seconds, so I went with the Rock Against Racism star. As you can see, I barely got that right.

In case you're wondering, the green tubes on the base are supposed to be cans of lager. They're made from 2mm plastic rod painted Vallejo Emerald and Silver, with a design badly daubed on with Off-White and Flat Red. I had to have something on the base and lager cans were the way to go. 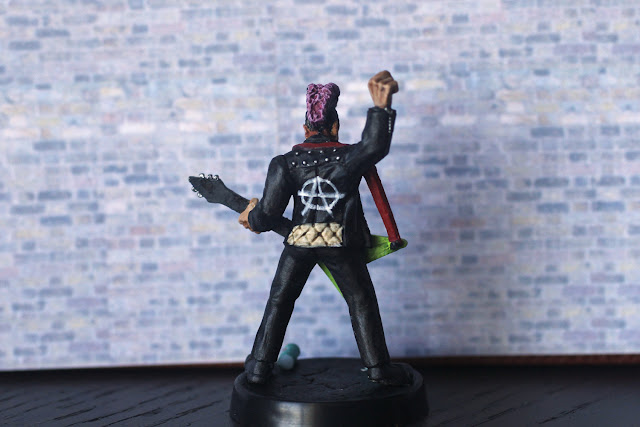 As far as his back went, the anarchy symbol the obvious choice. It took about four attempts to get it right as the circle kept going wrong, and I'm still not 100% happy with it. The bottom part of his jacket is done in Vallejo Off-White stained with Army Painter Soft Tone because a punk at my high school in mid Wales had done that to his leather jacket, only the white paint was Tipp-Ex and I shudder to think what the stains were. The studs and zips are tiny dabs of Army Painter Shining Silver.

Sid looks rather incongruous in my display case alongside the zombies, monsters and Space Marines, but for a figure I only got to get free shipping I really enjoyed painting him. Since then I've painted another punk but that one's going to wait for a future post.
Labels: army painter, basing, fun, reaper, vallejo