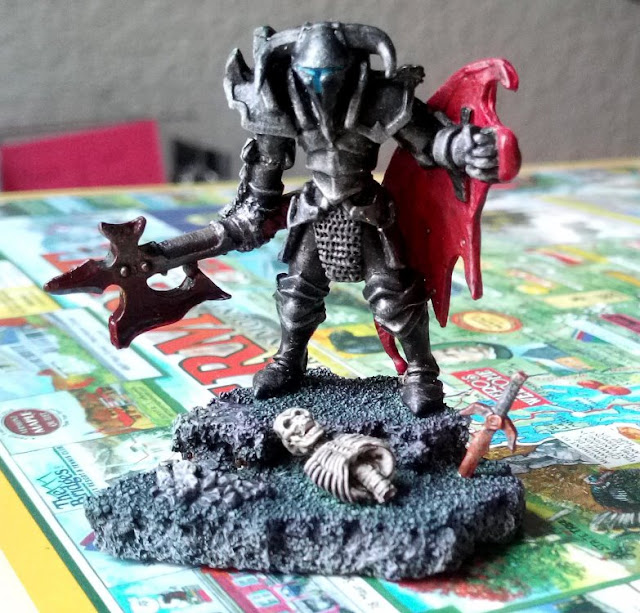 It had been a difficult and exhausting journey. Zarion Bloodnail, scourge of the Sotha Wastes, defiler of Fruaq Ciliasan, sworn enemy of the Khalolies, had slain innumerable challengers to be here now, at this precise moment, to perform his annual vigil to the one — the only one — who had almost bested him. The blood of the last Llirid who'd stood in his way still dripped from Bloodnail's ancient battleaxe. 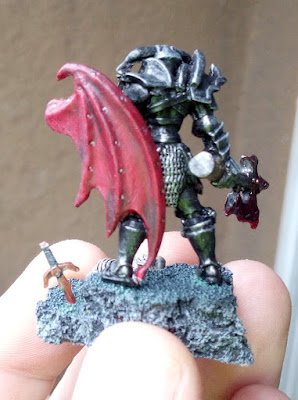 Finally he was here, standing at the site of one of his fiercest battles, the sun's weak light barely illuminating his soul-black armour. The skeleton of Utto Nosk, a worthy Cuccerine warrior whom Bloodnail barely bested after hours of shattering combat, lay on the blasted heath. His mighty sword Soulrapier, now rusted and useless, was still where Bloodnail had impaled it in the cursed ground of Verm-Ont once Nosk had finally fallen.

“Once more I stand above you,” Bloodnail said, gazing with some sadness at Nosk's bleached bones while remembering that fight, now decades in the past.

“You fought valiantly and died with honour. I have never since encountered a warrior of your skill these past 30 years, and I regret that I never will again. People in this new age are weak and cowering. You, old friend, were of a dying breed, and I fear that I am the last of that breed. Our kind will never be seen again in this world once I am gone.”

Suddenly, a fleeting vision crossed his mind, a vision that filled him with dread as he stood over Nosk's remains.

Beneath his cloven helm, its eyeslits glowing with pale eldritch light, Bloodnail's brow crinkled in thought.

“No. It cannot be,” he murmured, staring into the distance at the mist-shrouded Esternon Mountains. He concentrated, casting his mind back, trying to remember...

Reaper's Zarion Bloodnail was one of the first minis I bought when I got back into the hobby. I bought him in November 2018. I'm pretty sure I bought him because he looked cool, which is the basic reason I buy 100% of my figures.

Even in bare metal you can tell Zarion, or Zazzer to his mates, is an evil git. I liked the bat-wing shield and the horned helm and originally wanted to paint him up as a swords-and-sorcery Night Lord. Unfortunately, my painting skills and crappy selection of blues wouldn't allow it, and as I amassed more minis Zarion was put in a storage box and forgotten.

Early in the summer of 2019 I decided I really needed to make a start on my backlog of unpainted minis. I dug about in the Magical Box of Unloved Lead and rediscovered Zazzer. I'd totally forgotten my plan of making him into a D&D space marine and instead went for a basic black look with washes of Army Painter Plate Mail mixed with lots of black ink to give the metal a worn feel. The shield gave me a few issues as back then I only had two shades of red (Army Painter Pure Red and Dragon Red) so I just had to give it a go and hope for the best. The shading was a lot easier. The pale blue visor was originally going to be orange, but ended up Army Painter Electric Blue for reasons lost in the mists of time. 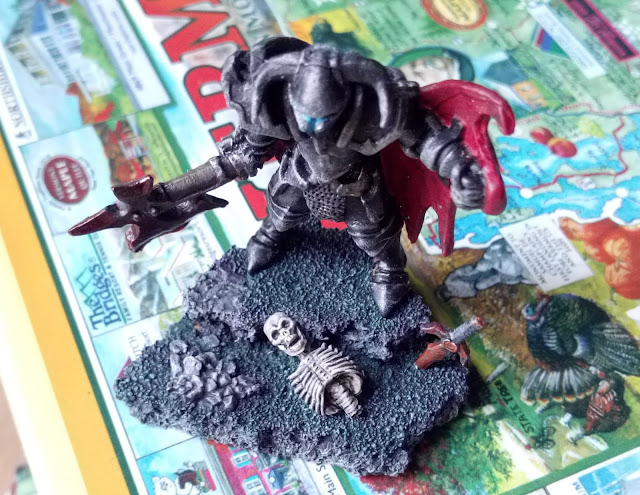 This pic gives a better view of the base and also shows off the mould line across the top of his helmet, so yay. The base is made from two pieces of cork tile, some sand, small stones and a skeleton and sword from Reaper. Zazzer's stance is as if he's standing over something, which is what gave me the idea for putting the skeleton there. The base is painted with Citadel Caliban Green and washed with Army Painter Purple and Green tones.

The dripping blood on his axe is Elmer's glue painted over with Blood for the Blood God, a thick transparent red. The sword was plastered in Army Painter Rust effects paint, and once it was all superglued together the story at the top of this post wrote itself.
Labels: army painter, citadel, d&d, evil warrior, fantasy, magical box of unloved lead, miniatures, reaper