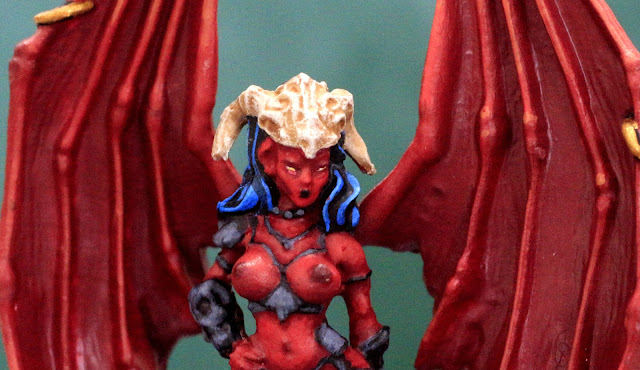 Eilluvasheth (Elli from now on) is a late entry for Fembruary. She turned up in the mail on Saturday and I wanted to paint her alongside Vandorenda. I spray primed her on Saturday afternoon, and that was almost the end of Elli. The spray primer went on really badly, with lots of pooling, and was still tacky on Monday morning.

I don't know what happened with the primer, but I have a feeling it was because:

1. The garage was slightly too cold.

2. The garage was slightly too warm.

5. There was a vowel in the month.

I thought about stripping the primer and starting over, but just decided to slap on the paint and see how it went. 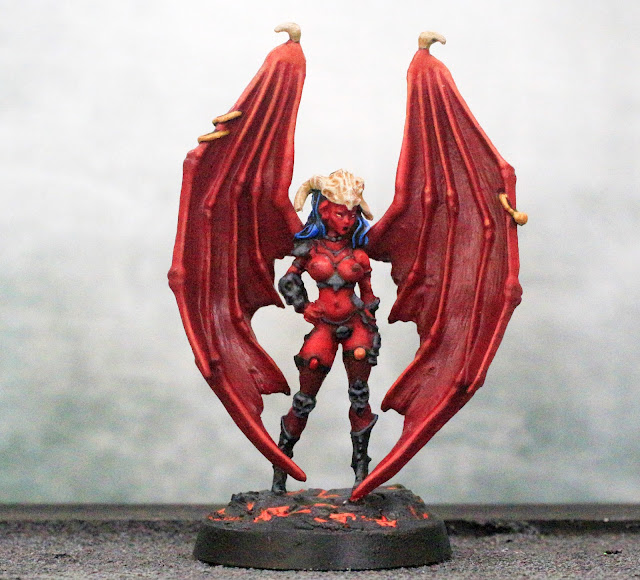 As Elli is a plastic Reaper Bones figure, she comes with the mandatory crappy integral base. I glued her to a 32mm one, used modelling paste to build up around the flagstones she's standing on and left her by an open window to speed up the drying process, which was fun as it didn't get above 30f (-1c) all day.

After finishing Van and putting her online, Elli was basecoated with Khorne Red, which covered the primer with two thin coats. And there I left her till Tuesday.

I wanted her to be a suitably daemonic shade, so I started layering on thinned Mephiston Red as if the light was coming from directly above her. It was easy to do, and even her skin went well, way better than the other red-skinned demon I painted in 2020. Once the Mephiston Red looked good I switched to Flat Red, then Vermilion, then a mix of Vermilion and Averland Sunset, then Wild Rider Red, before finishing the highlights with Wild Rider Red mixed with Averland Sunset.

I realised that she's wearing fishnet stockings, which are moulded into her legs. Why would you do that on something this scale? I wasn't about to try painting the lines, so I just left her lower legs Khorne Red and went over them with Nuln Oil to give the impression of stockings. I think I got away with it.

I'm really happy with her skin and wings, the layering worked so well and as my skill with it varies wildly I'm glad it worked this time. Even her eyes, which are Deep Yellow, went OK, only taking three attempts. 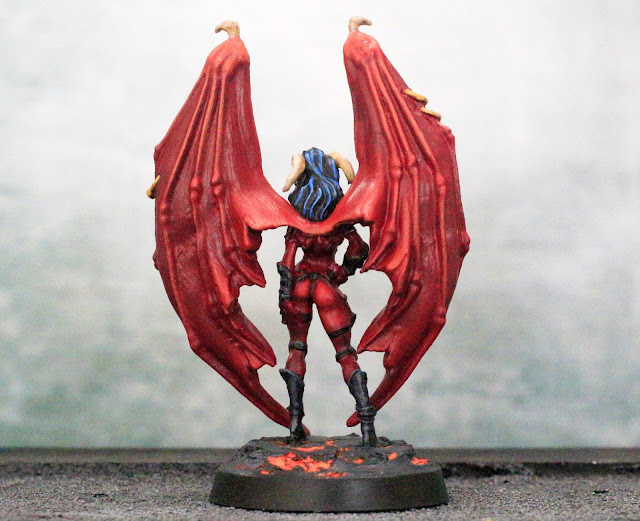 After finishing her skin she was given a coat of matte varnish, then I hit her wing rings with Averland Sunset and Brass and her hair with Black, Magic Blue and Electric Blue. What little of her clothing there is was painted Black and highlighted with Grey Seer and Neutral Grey, and her skull helmet thing is Aged Bone, Sepia Tone and Bonewhite. She has a jewel on her right stocking top, which is Blood for the Blood God, and a metal disc on the left one, which is Copper. 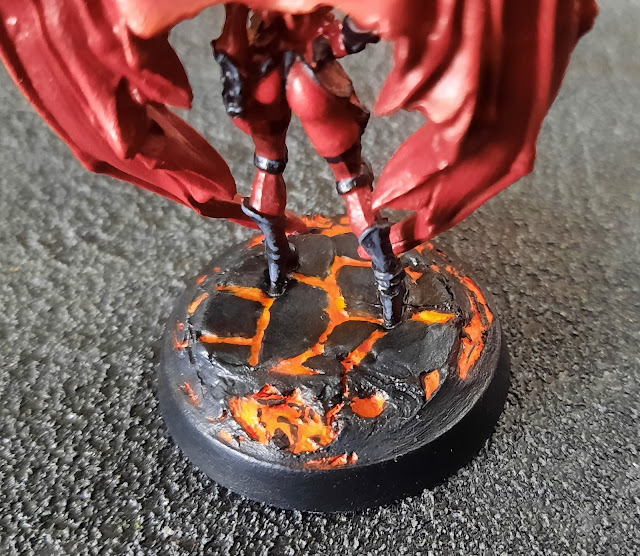 On Wednesday morning I started on her base. I wanted a lava look, so I painted the whole thing Heavy Orange and went over it with a couple of coats of Bright Orange. Two washes with Casandora Yellow intensified the orange, and then I added some small areas of thinned Deep Yellow.

I painted the stones Black first, and then just painted over areas of the orange to give the appearance of a crust. Some highlights with Black Grey and she was done.

I'm very happy with how she turned out. After the priming disaster I really wondered if she'd be paintable, but thankfully she was. And no, she isn't appearing in the zombie apocalypse LOL!