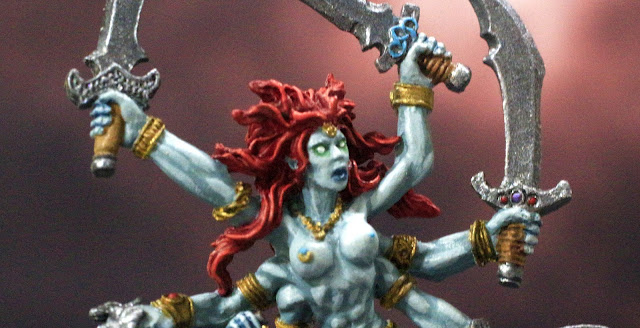 Try as I might, I cannot think of a single convincing story that will allow a six-armed, grey-skinned, flame-haired and firm-breasted snake demon to appear in the zombie apocalypse. Sorry about that.

I bought Vandorendra (Van from now on) in late 2020 with plans to use her as a proxy model for Dechala, the Denied One in my Slaanesh warband... which I really have to get around to finishing. Anyway, at $7 Van was a lot cheaper than an OOP Dechala model from Ebay. To cut a long story short, I never got around to painting Van until I thought I'd attempt to get her done before Fembruary ended today.

I did it, but it nearly killed my will to live. 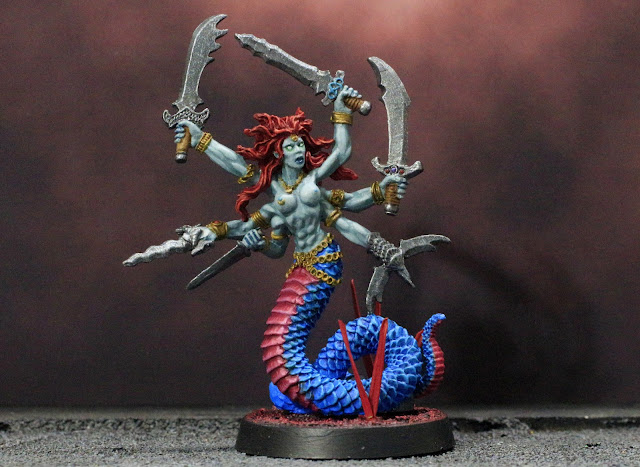 Van was sprayed white, and once dry I started on her snake half as I thought that would be the most straightforward part, and in tribute to her Slaanesh heritage I decided on pink and blue. I kicked off with Magic Blue, washed with Blue Tone and highlighted with Electric and Deep Sky blues.

The front scales got a coat of Warlord Purple, a wash with Red Tone and highlights courtesy of Sunset Red and Pink. The Pink was a tad too light but another dose of Red Tone calmed it down nicely.

And that was the end of the (relatively) easy bit. 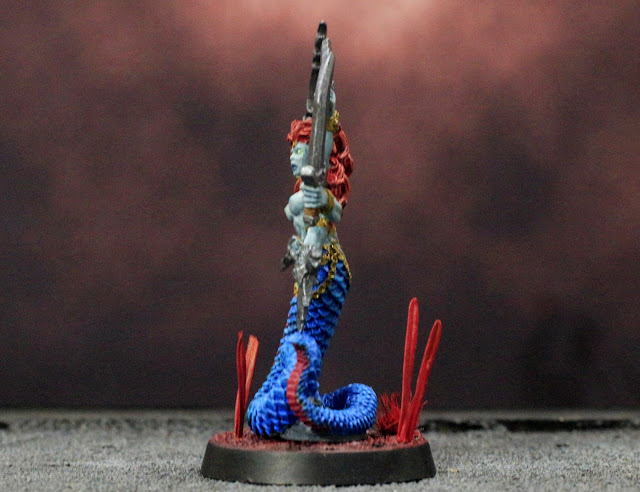 Oh crap, you can see the integral base. Bugger. Anyway, as I had no clue what shade to use for her skin I decided to hit all the metallic bits next.

Julie Guthrie did a stunning job on this sculpt, but why she thought Van needed bracelets on every arm is beyond me. All her jewellery was basecoated with Averland Sunset, and the chains around her waist almost had me microwaving kittens by the time I finished them. I then had to go over all the yellow with Bronze, which was an exercise in swearing every time I got some on her tail. Which I did. A lot. Out came the Magic Blue to touch up the errant metallic, then the Blue Tone, then the highlight colours to make the touched-up bits match the original paint.

All her weapons were based with Neutral Grey and then painted Gunmetal. They a lot easier and quicker than the jewellery. The sword handles are just Flat Earth, Orange Brown and Burnt Umber Wash. 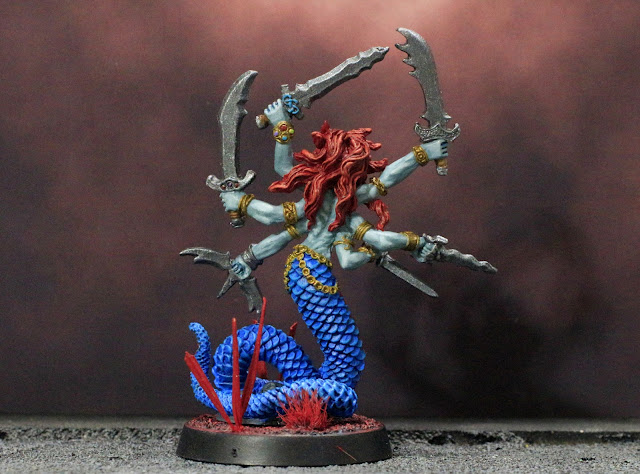 Next up was her hair. As my Vallejo Red is almost empty I splashed out on Khorne Red and Mephiston Red on a recent trip to Bennington. I know I slag off Games Workshop a lot but Citadel base paints really are the biz, and Khorne Red in particular is a beautiful shade. I used it to basecoat her hair, then gave it a careful drybrush with Mephiston Red. Thinned Wild Rider Red was used for the final highlight.

All that was left to do — although "all" makes it sound like the previous steps went well, when in reality they were an endless slog of touch-ups, screw-ups and swearing during which, I was horrified to discover, I'd listened to FIVE albums* on YouTube — was her skin tone. As she has a touch of daemonette about her I thought about pink, yellow, pale green or light blue, but finally went for a trio of colours I've used before on Giles and Jakul Frosti: Dark Blue Pale, Light Sea Grey and Light Green Blue. All three work well together as they're very close in shade.

Suffice to say I ended up with Dark Blue Pale spots on her hair, sword handles, waist chains and bracelets. I didn't stop to touch them up and just got on with the highlights, first with Light Sea Grey and then Light Green Blue. After those fun and games (during which I burned through another two albums!**) I broke off for lunch and a much-needed break. 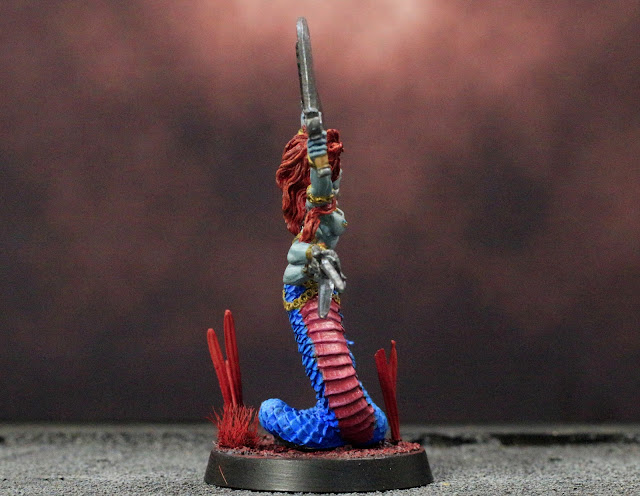 Fortified by coffee, a cheese-and-pickle bagel and a Clif bar that Alicia didn't hide very well, I got back to work. I spent a while touching up all the misplaced skin colours and finally reached a point where I was 99% sure I'd got all of them. I used Blue Tone to colour her lips, and daubed some Biel-Tan Green into her eye sockets. Her eyes were then given a couple of dabs of white and, in an event that sent my dopamine levels back to something approximating normal, got them right first time. A coat of matte varnish and she was done.

Oh shit, the base. Van is on an integral base, but as I have a burning hatred of those I glued her to a 32mm one and carefully, oh so carefully, painted Vallejo Black Lava paste around her. Once that dried, during which I moved the house three inches to the left just to do something fun, I painted it Mechanicus Standard Grey and washed it with Red Tone just for something different. Once dry I drybrushed it with Mephiston Red and Flat Red. In case you're wondering, I too had no idea where this base was going.

I had to add some kind of other element and found a small bit of Christmas tree that somehow survived the Great Sweeping back in January. I painted some of the needles Flat Red and glued them to the base, then painted a tuft the same shade and stuck it on. And Van was finished, the Dark Gods smiled once again, and I sat back, took a deep breath, relaxed, and then panicked when I remembered about the laundry.

Although Van was, to put it lightly, a pain in the arse to paint, she's an awesome figure and I'm happy with how she turned out. So that's Fembruary over again, and like last year it's been fun. Tomorrow is March 1, which means two things: i) St David's Day and ii) my 18th anniversary on moving to America.

*Album by Public Image Limited; First And Last And Always by The Sisters Of Mercy; Godfodder by Ned's Atomic Dustbin; Into The Gap by the Thompson Twins; and Pretty Hate Machine by Nine Inch Nails.

**The Contino Sessions by Death In Vegas and All Of A Sudden I Miss Everyone by Explosions In The Sky.