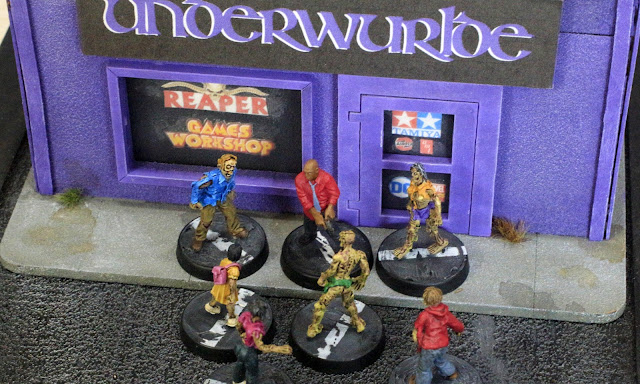 As the zombies close in and Earl discovers he's out of ammo, he thinks back to those Friday night 40K games and finally knows how his Blood Angels felt when they were overrun by poxwalkers.

I had the idea for Underwurlde months ago, probably around late December. I was thinking about getting more buildings, and painting one as an FLGS was an obvious choice. I was stuck for a name until I remembered Underwurlde, the awesome computer game by Ultimate that I played on my ZX Spectrum+ back in the mid-80s. It's the perfect name, and months later I finally got around to making it.

The kit is again by Atomic Laser Cut Designs, and is Store Front BC001 from their Big City Streets line. I chose it because I wanted a one-storey building with a largish front window to fit some logos in. 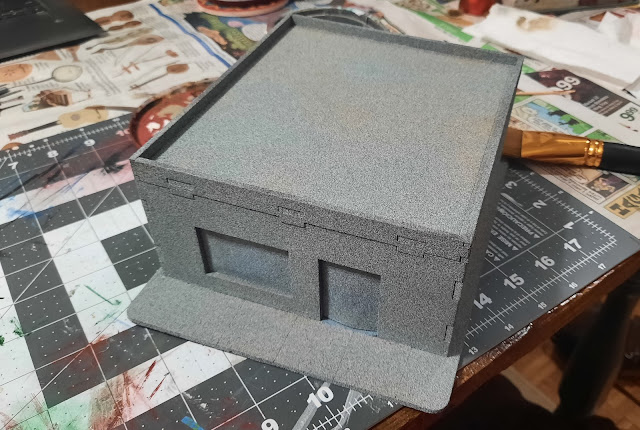 As per usual, construction was a doddle and it was sprayed with grey texture paint and left to dry overnight. While it dried I got all the logos I needed printed out onto one sheet of paper. I also cut the windows out of the plastic sheet and gave the doors and frames a coat of primer because I forgot to spray them (duh).

Once dry it was brought up to the kitchen table to be finished. I thought about painting it black, but as I did that for the record store I decided on purple instead, using Concord Grape craft paint. The interior was painted with black craft paint to hide the emptiness and I used the grape paint on a bunch of coffee stirrer sticks to get them ready.

The grey texture paint works way better than the sand colour as you can actually see any bits you've missed. 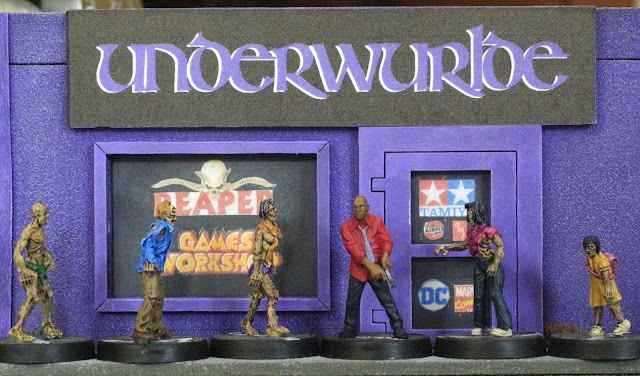 With the black interior paint dry, I started cutting out the logos. The Reaper and Games Workshop ones were actually not that difficult to do with a new blade in the X-Acto knife. I glued those to the inside of the window with matte Mod Podge and then used superglue to stick the window in place. The smaller logos were stuck to the inside of the door glass and that too was stuck in place.

The sign was done using a Celtic font with a drop shadow, printed out and stuck to the MDF piece with a glue stick.

The doors and frames were also painted Concord Grape and highlighted with Vallejo Blue Violet and stuck on, and then the roof was glued in place. The coffee sticks were added to each corner, and finally the pavement was painted the same way as the roof and I added some tufts to represent weeds.

The coffee sticks were too new-looking, so they got a light drybrush with more Granite Grey to make them look worn and better match the building's paint.

Ooo, graffiti time! I thought I'd go for some apt mural-type images this time, starting with a really bad Ork and their classic battle cry. Yes, the W should be closer, but apparently I can't do kerning, leading, tracking or alignment of type without a computer so we're stuck with it. The Ork is... well, it's there. And I have a feeling Orks spell STARFF with one F.

I decided on Batman for the other side and did a very basic shape in black, but then the issue of what do put next to him came up. Instead of adding another superhero, I just painted the Joker's classic line from The Dark Knight and added a twisted smile to Bats. 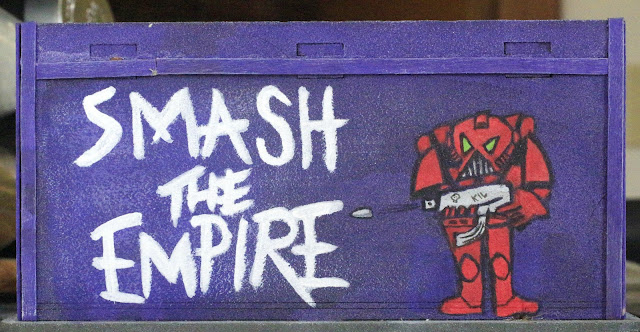 I wanted another 40K image for the back, and what's more 40K than a Space Marine? Given I freehanded this chap I'm amazingly proud of him, even if his bolter's magazine is a tad banana-y. He was originally shooting at a cutesy cartoon daemonette, but she went totally wrong so was painted out. I wondered what else would annoy one of the Emperor's finest, and the words just popped into my head.

So that's five buildings done now, and although I know my fan(s) want a shot of them all set up, you're going to have to wait till I've finished the sixth one :-)