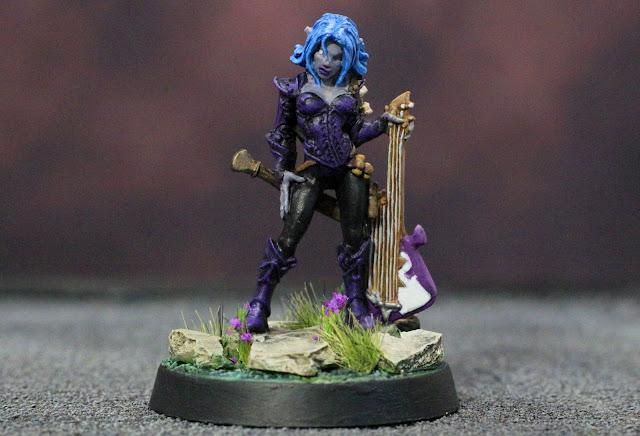 You go almost four years in the hobby without painting a female character called Astrid, and then two show up in the same month. Weird. Unfortunately, unlike the other Astrid I had no way of fitting her into a post-apocalyptic zombie setting so she's going to be one I painted for fun.

This Astrid has been a proud citizen of the Magical Box of Unloved Lead since last year, when she was dumped in my Amazon basket so I could — you guessed it — qualify for free shipping. I thought she was a pretty cool mini and I don't paint too many fantasy figures, so she'd make a nice change from zombies, monsters, post-apoc survivors, Space Marines and Lovecraftian horrors.

Astrid's original colour scheme was going to be much brighter, with Light Turquoise for her clothing. But after priming her white, I thought she had much more of a goth/rock chick look about her, so Black was the way to go. Her boots, bodice and sleeves were lightly drybrushed with Violet a couple of times to add some colour, and her leggings were going to get Purple stripes until I totally messed them up and just repainted them Black. All her clothing got a wash with Druchii Violet. 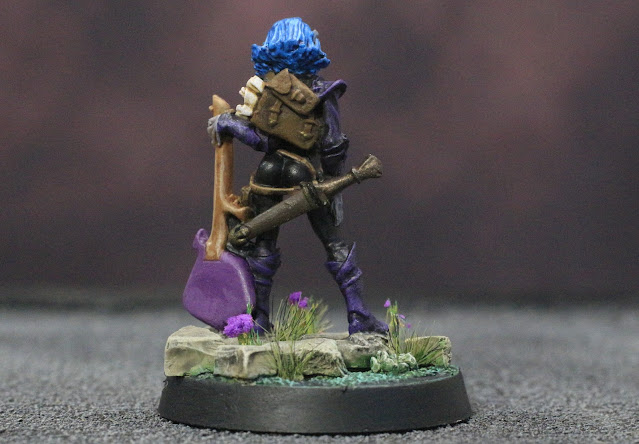 She has a lot of little details. The straps, sheath and leather pouches were all done Chocolate Brown highlighted with Flat Earth, and the end of the sheath is Bronze. The sword hilt is Tinny Tin to keep the dark look going. The scrolls in her backpack, which I assume are her guitar tabs, are Ivory and Off-White.

The guitar was a bit of a pain, mostly because of the strings. The body is Purple and White, and the neck is Heavy Skintone shaded with Sepia Tone. The strings were carefully gone over with Ghost Grey but are a bit of a mess.

The final bits were her hair, done with Light Turquoise and Deep Sky Blue, and her skin, which is Cold Flesh highlighted with a bit of Ghost Grey mixed in. Her eyes were an absolute sod to get to, so I just dabbed in some Off-White and didn't bother with pupils. 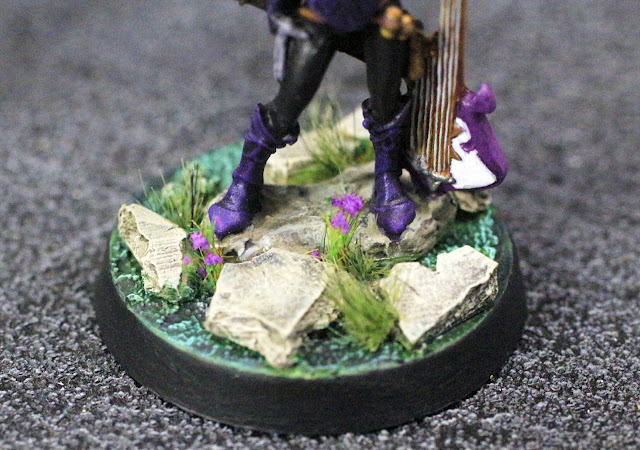 Astrid comes on an integral base (AAARRGGHH) in the form of a rock, so I glued her to a 32mm plastic base and coated it with Vallejo Black Lava paste. While it dried I used Milliput to make a sort of basic flagstone shape and left it to dry. The paste got a coat of Stone Grey, and then several washes of Biel-Tan Green.

The Milliput flagstone was broken up and random bits glued around the base, then they were also painted Stone Grey, washed with Nuln Oil and drybrushed with Stone and Ghost Greys. At this point I realised I had no real plan for the base and was making it up as I went along, so I stopped to have a bit of a think. The green wash got a drybrush with a mix of Park Flat Green and Ghost Grey, and then random daubs of Druchii Violet to break it up a bit. Finally, I sliced up some tufts and purple flowers and superglued them in place.

It turned out pretty well given I had no idea what I was doing or where I was going with it, and it does suit her fantasy setting.