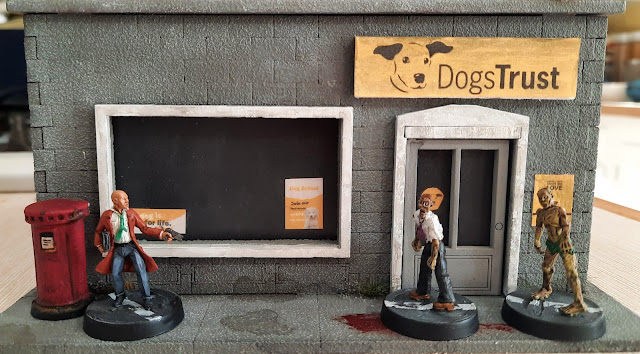 Dr Zander holds a couple of zombies at bay outside the local charity shop. Ironically it's where he picked up his cool leather coat last year.

After doing the newspaper office, I decided that what my little zombie-infested town needed was a charity shop. I thought about making one up, but then decided to go with a real charity, the Dogs Trust, for obvious reasons. 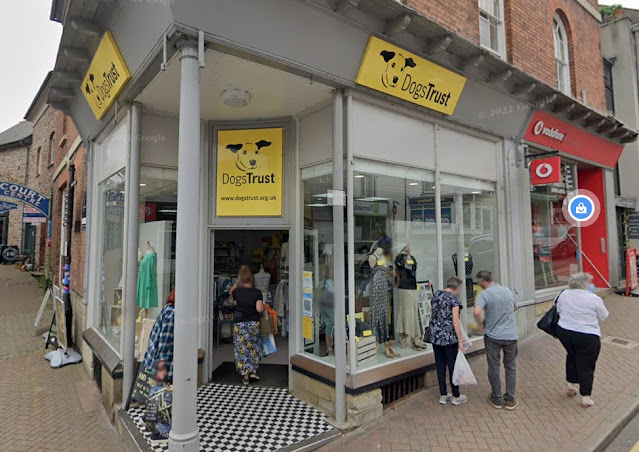 The photo above is of the shop in the English town where I used to live, and where a couple of years ago I bought Cadbury a bandana (shredded by Erebus), Erebus a frisbee (chewed up by Erebus) and myself a mug (still in one piece). I'm going to follow the same basic colour scheme with a grey frontage and I downloaded images for the signage and posters. 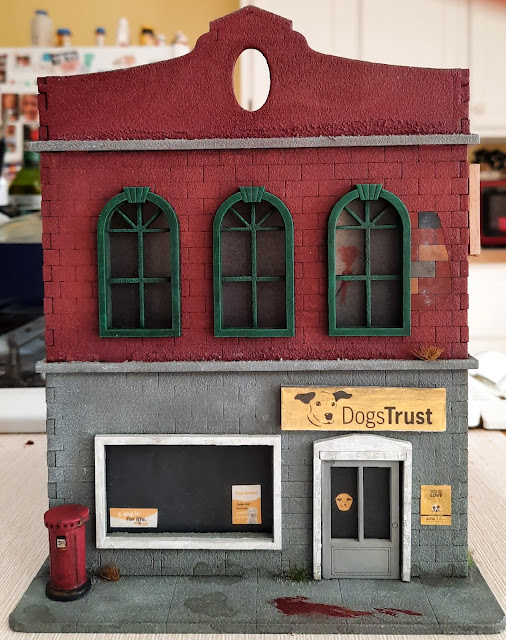 Construction was easy enough, and it was sprayed with the texture paint and left in the garage for a day to dispel the awful stench. Once dry I sprayed it again, this time with a satin paint called Cabernet, which I thought would make for a nice deep red colour. If I ever make an MDF Tube station it'll be the perfect shade. Like The Chronicle, I used masking tape to cover parts of the wall so the bricks would show.

While the red spray was drying I painted the store window frames and door White and dirtied them with thinned homemade black wash, and the upper floor window frames Mutation Green drybrushed with Park Green Flat. The doors were painted Neutral Grey.

Once the red had dried, the lower front got three coats of Pewter Grey craft paint and the whole building was given a generous coat of homemade black wash and left to dry. I got on with cutting out the plastic windows. 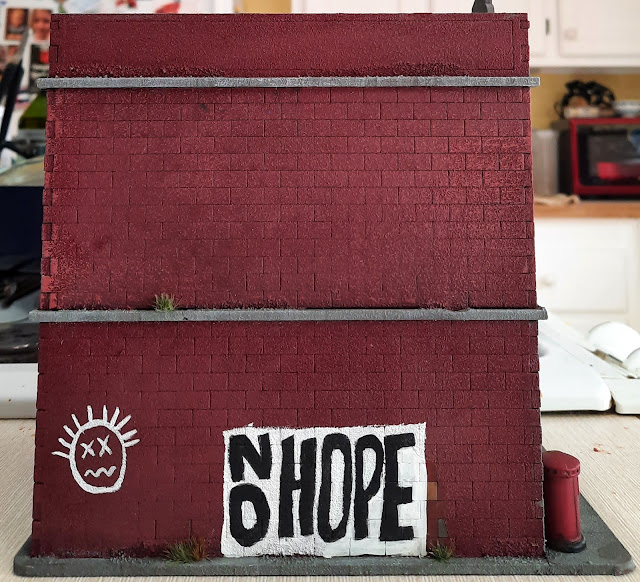 With the wash dry I painted the interiors with black craft paint and glued the windows in place. The exterior walls were drybrushed with a mix of Flag Red and Khaki craft paints, and then the doors and window frames were stuck on.

Once that was done it was time to vandalize it, so I did some basic graffiti on the right side. I had to cram the "No Hope" one in because the white block was painted in between two tufts. Duh. I also did a larger version of the spiky-haired face I put on all my buildings. 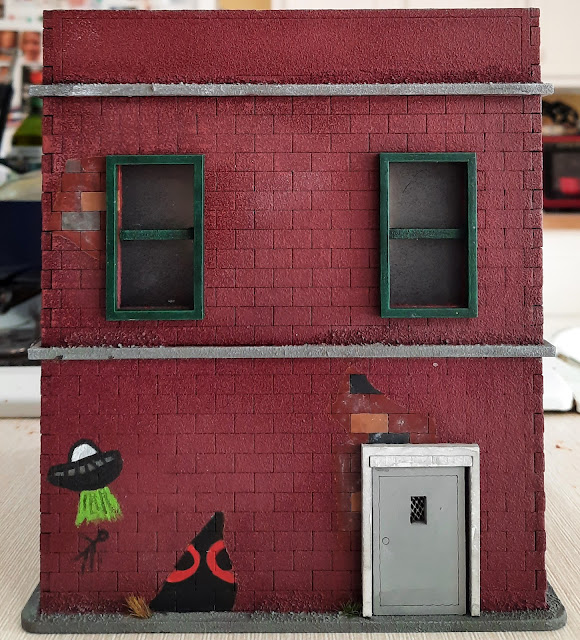 The back got a UFO and I painted the exposed bricks on the bottom black and added some crappy eyes peering through. The other bricks were painted the usual way, Terracotta with random ones in Neutral Grey and Heavy Skintone, then stippled with Ghost Grey.

I've just noticed that the left window frame isn't lined up, so I'll have to pop it off and reposition it. 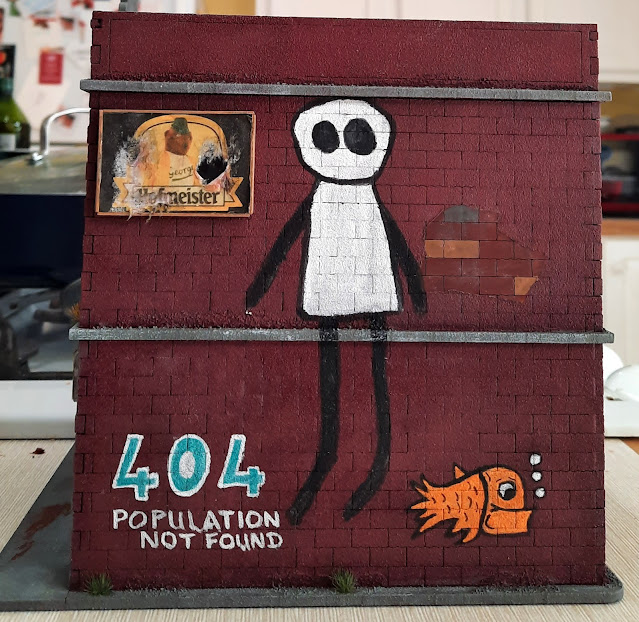 The left side was done the following day, and I went to town a bit. I made another mini billboard, this time with a poster for Hofmeister lager featuring George of "Follow The Bear" fame (and there's a blast from the past for the Brits!) I wanted to put another stick figure on the side and decided to make it a two-storey version for a change. The fish was nicked from a google search, and the 404 error message is a depressingly funny one I've wanted to put on a wall for a while.

As always, the pavement is Pewter Grey, black wash and Granite Grey, dirtied with Sepia and more black wash. I added a large smear of blood with a toothbrush and some Blood for the Blood God, and added some to the top right window. The signs and posters were printed out, and the sign was glued to a piece of 3mm foamboard and stuck to the front. The posters are held on the inside of the window with matte Mod Podge. And, finally, I glued my other British pillar box on the base just to do something with it.

I'm very happy with how it came out. I planned this one a lot better, with the idea, colours and signs all sorted out before I even glued it together, and thanks to that the whole process was a lot easier. The Cabernet red worked really well and I like the idea of having a dog charity in my little town.

In a shock announcement, I bought two more buildings so stay tuned!