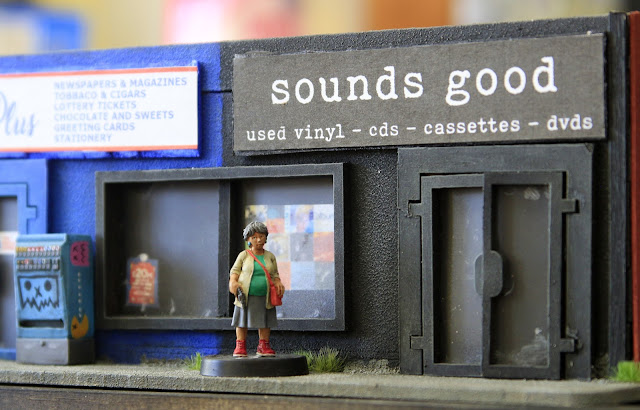 Carol pauses between zombie kills to check out the local record store. She's miffed that the cigarette machine doesn't work, and she'd give the manager a piece of her mind if a zombie hadn't already eaten a piece of his.

When I left off last time, the building was painted and the vents and vending machines were done. All that was left were the signs, windows and graffiti. This sounds simple and straightforward, but this is me we're talking about. I also finally decided on what the shops should be: one is a newsagent, the other a second-hand record store.

The first thing I did was paint the pavement around the building with Pewter Grey craft paint, shade it with homemade black wash and highlight it with Granite Grey. I dumped on some more wash to vary the tones a bit, and also added some to the roof.

Then it was time to add some graffiti to the sides and back of the stores. Unlike my first building, when I used transfers, I painted these on myself, and it's safe to say that my freehanding sucks. The right side got a larger version of the "alive" chap who's on the side of the cigarette machine.

I wanted some larger wording across the back, so I finally did what I'd wanted to do on my billboard and put the depressingly ironic "That's all, folks!" on it. I drew the lettering on first, then painted over it with several coats of White craft paint. You can still see the pencil lines, so I'll have to go over it again with white acrylic.

When it comes to graffiti, I have huge problems just thinking of phrases and designs, so I basically gave up on the left side and just wrote "Please do not feed the zombies" with a 0.5mm Micron pen. I really should add more graffiti at some point, and once I think of some I will.

The newsagents was painted with Cobalt Blue and Cool Blue craft paints, and the record store with Black and Pewter Grey.

I didn't want to board up the windows on this model. It occurred to me that taking the time to do this during a zombie apocalypse would be kind of stupid when you should really be running for your life. Luckily I had some thin clear plastic, so after measuring up I cut out the pieces I needed and sprayed them with matte varnish to dull the shine and make them look dusty/dirty.

The posters were made on my PC, printed out and stuck to the inside of the windows with a glue stick, which is the best thing to use when gluing paper. The newsagents has a couple of posters for the UK National Lottery and a sign with opening times. For the record store (which is named after the one in the mid Wales town where I lived back in the 80s) I wanted to do a display of album covers. After downloading a bunch, I put them together and then shrunk the image down to fit*.

With the windows done, the roof was finally stuck on and held down with a couple of books. Once dry, I glued on the vents, coffee stirrer sticks and signs. The signs are more print-outs glued to pieces of 3mm thick foamboard. The newsagents is based on one I found online, and the record store is inspired by the cover of The Cure's live album Concert.

The sign on the pavement outside the newsagents was easy enough: just a printed image glued to a piece of plastic card and folded over. At the paper I worked at in Wales these were called "bills" and I got to write a few myself over the years. I glued the cigarette machine in place, but there just isn't room for the soft drink machine so it'll go outside another building when I get one.

The final touch was adding some tufts around the outside to simulate weeds (and cover some gaps).

Overall I'm well happy with how this model turned out. The graffiti could be better, and I need to add more, and the construction isn't as good as the convenience store: the roof isn't quite aligned properly, and I can't work out why. You can see some of the corner sticks bending out because of it. But in terms of overall looks, it's great. The signs look great despite the newsagents one being slightly crooked, the fogged glass worked really well and the little details such as the posters and vents add realism.

I asked Alicia for another building for my birthday, and yesterday a package from Atomic Laser Cut Designs showed up in the mail, although I can't open it till next week. Who knows, I might actually get a figure finished before then LOL!

The first two chapters of this enthralling tale are here and here.

*The album covers are: Souvlaki by Slowdive; Split by Lush; Leisure by Blur; Album by Public Image Ltd.; And Then She Smiles by The Mock Turtles; Quick Step & Side Kick by the Thompson Twins; Floodland by The Sisters of Mercy; Kiss Me Kiss Me Kiss Me by The Cure; Fixed by Nine Inch Nails; Doppelganger by Curve; Nowhere by Ride; and The Queen Is Dead by The Smiths.