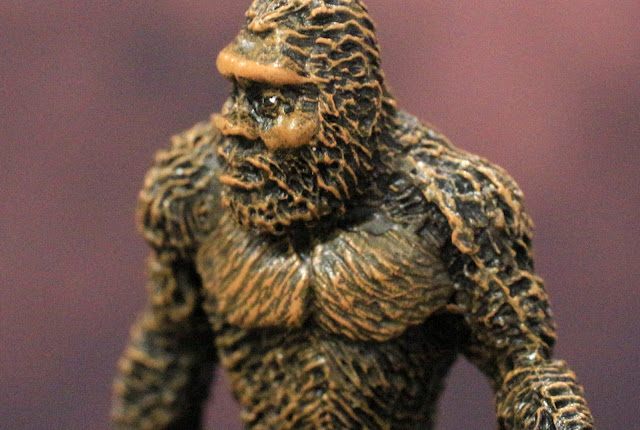 My best friend, Gareth, recently turned 50 a few days after me, so I decided to get him a pressie to mark the occasion. As he's a big fan of the Sasquatch legend I picked up this Reaper mini as a suitable gift. It's a great sculpt by Jason Wiebe, based on the famous frame 352 from the Patterson-Gimlin film, seen above. In case you've never heard of it, in 1967 Roger Patterson and Bob Gimlin headed off into the wilds of Northern California to see if they could spot a Bigfoot and saw what they claimed was a female sasquatch striding across Bluff Creek. Patterson jumped off his horse and ran towards the creature, filming as he went. The resulting shaky 60-second movie has been seen as definite proof or a total hoax, depending on where you stand. You can see a stabilized version here.

As far as the question of fake v real goes, I'm undecided, although I do find the story of the filming to be fascinating. And in case anyone is wondering, Patterson was adamant that the creature was female and it's been nicknamed "Patty" so I think it qualifies for Fembruary even if Wiebe didn't sculpt her fairly obvious breasts.

Anyway, on with the painting. 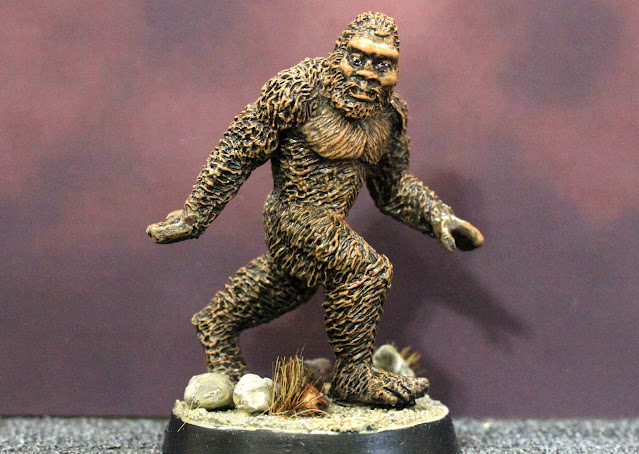 Patty was primed with black spray paint and given a heavy overbrush (which, thanks to Dave and Justin I've learned is actually called wetbrushing) of Chocolate Brown to bring out the fur texture and give a good base for the highlighting. With that dry, I hit it with a lighter overwetbrush of Chocolate Brown mixed with Orange Brown. I gave Patty a drybrushing with pure Orange Brown, then added some Light Brown for the final highlights. The fur is well sculpted with great definition, so it's easy to bring it out with careful drybrushing. I used more Light Brown on the sole of her foot and palm of her hand, and around her face. And that was it; four colours and she was basically done, apart from her eyes, which took two attempts. Ooo, basing time! I used a 32mm base to give me a bit more room than the 25mm one she comes with. As you can see from the movie frame, the creek bed was basically grey so that's what I went with. After spreading on some Vallejo Black Lava texture paste and leaving it to dry, I glued on some small stones and painted the whole thing Stone Grey. It was given a Nuln Oil wash, then highlighted by adding some Ghost Grey to the Stone Grey. A couple of random daubs of Sepia Tone varied the colours a bit, and I finished it with two small tufts and a tiny twig I found on the kitchen floor (seriously).

Patty will soon be winging her way to the wilds of South Wales, and hopefully she'll survive the trip. As for the new buildings, one is 95% done and there'll be a post on it soon.