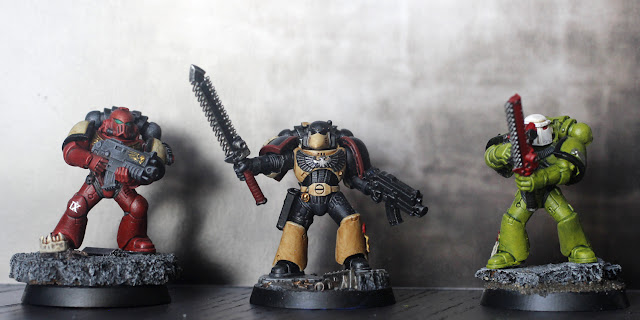 Remember when I said I'd "accidentally" bought a load of Space Marine bitz on eBay? Well, here we go.

First up, I should probably explain the "bitz" thing. These days Marines are plastic, not metal, and come on sprues containing separate pieces, meaning you can swap pieces around to build the individual model you like. Not only is this great for the painter/player, it's also a godsend for people who buy boxed sets and then sell the bits on eBay; individual pieces can go for up to $10 depending on rarity. I should probably add that these Marines are presented in the order I decided to photograph them, not in the order they were painted. 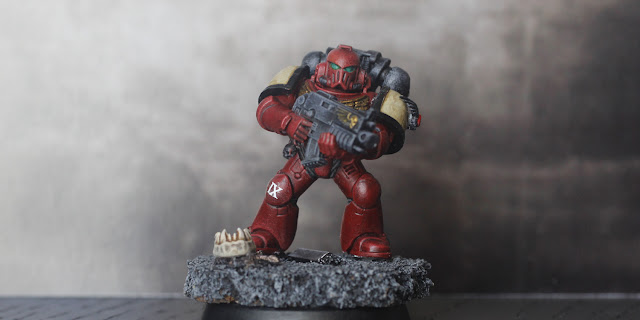 First up is a Blood Raven, which I've only heard of from them appearing in the Dawn of War videogames and what is by far the best Warhammer 40K movie ever made:


I've never been a fan of painting red armour. Back in the day, the official Games Workshop instructions for painting red Marine armour were basically "paint it really really bright red, then highlight with orange". I could never get the hang of that, which is partly why I ended up painting and playing Ultramarines. After using the google to get some hints, I basecoated my Raven with Citadel Abbadon Black and then painted what felt like 500* layers of Army Painter Dragon Red over it to build up the colour.

After a wash of Strong Tone to bring out the shadows, I highlighted him with more Dragon Red and then Pure Red. His gun and backpack are Black, drybrushed with Plate Metal. 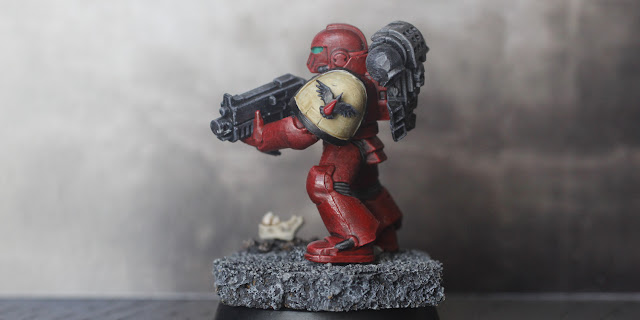 His chapter badge is a 3D printed one I got from Shapeways, sort of like these but not. It's really well done and was easy to paint. His shoulder pads are Army Painter Skeleton Bone with a wash of thinned-down Soft Tone. The eye lenses of his Mk.IV helmet are Jungle Green with a couple of coats of Green Tone. 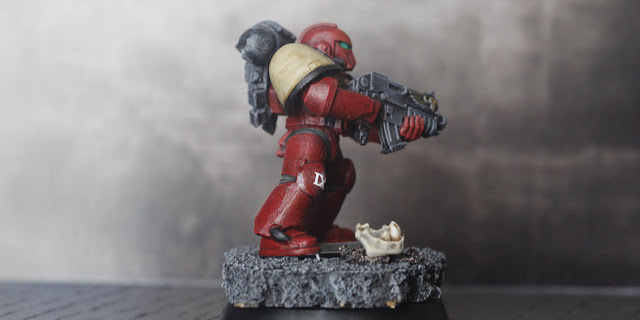 I went a bit nuts on the cork tile bases with my Marines, so get ready to see a lot of them. I added an ork jawbone to this one to fill a bit of space. The IX on his kneepad is from a transfer sheet.

I'm really happy at how the Blood Raven turned out. The red worked better than I thought it would and even the shoulder pads look good. And the 3D emblems were worth the $20. 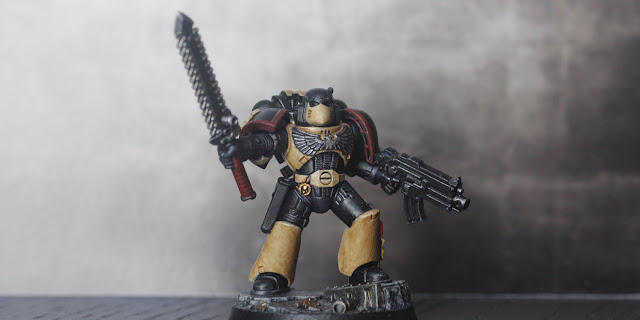 This is the first marine I'd painted for about 25 years. He's one of the Space Marine Heroes range that I picked up at Brookhurst Hobbies. He's painted as a Marine of the Mortifactors chapter in Army Painter Black and Skeleton Bone and Vallejo Black Red. The Heroes come with the option of a helmeted or bare head, but I used a beakie helm (Mk.VI to give it its proper name) from eBay as they're my favourite helmets by far.

His base comes with the figure and looks really good, so I'm typing this wondering why I didn't take a pic of it. 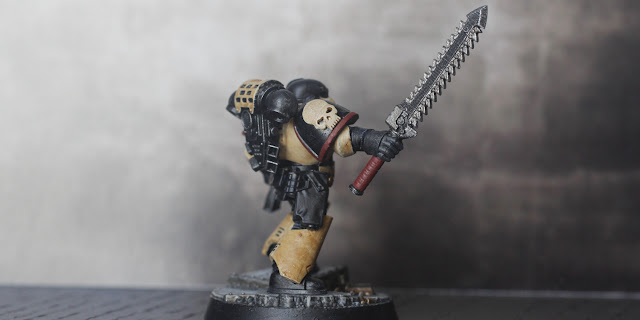 Both his chapter emblem and his chainsword are 3D printed bits from Shapeways. The chainsword comes with the hand attached, so I had to slice off his right hand to glue the sword on. He was originally holding his bolt pistol in his right hand (hence the empty holster) and frankly I thought it was dumb that he was wielding both his boltgun and pistol at the same time. Not only that, but I'd shelled out $20 on the swords and desperately wanted to justify the expenditure. The sword is in Army Painter Plate Metal washed with Dark Tone and highlighted with Shining Silver. 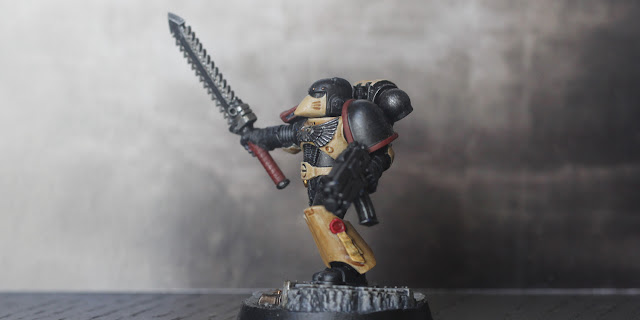 The purity seal was moulded to his leg, something I've noticed Games Workshop doing more and more these days. I guess this is a result of using 3D software to design the figures; adding little details by dragging and dropping is easier than carving them out of greenstuff.

Mortifactors are, surprisingly, descended from Ultramarines and appear in one of their novels, much to the smurfs' horror, as the Morties are into bones and death in a very late-night telly kind of way. One thing I forgot when painting this one was the cracks on the bone portions of his armour, but I doubt my skills at the time would have been up to them. 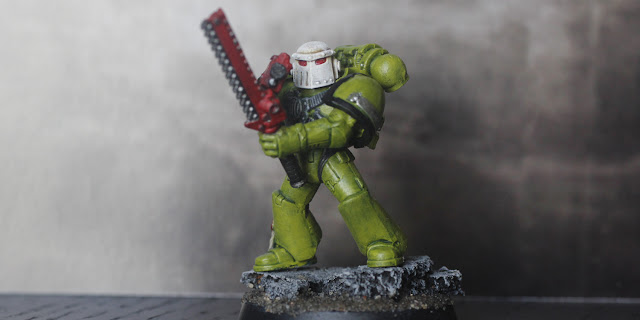 In my quest for Marine chapters to paint I found the Sons of Medusa and their bright green livery. I picked a brutal-looking Mk.III helmet for this Marine and painted it first, with Vallejo White shaded with Army Painter Soft Tone. I looked around online to see what shade of green to use and discovered that there are different takes, from apple green to lime green. I used Vallejo Golden Olive, shaded with Army Painter Green Tone, and Abbadon Black for the trim on his shoulder pads. 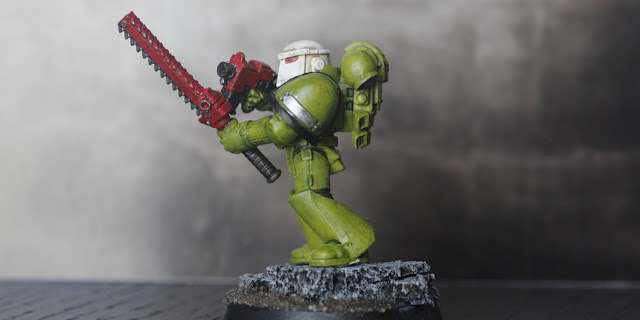 His chainsword is the same as Morty's. I just cut off the pointed end and sliced off the top teeth to make it look different before giving it and his bolt pistol a coat of Army Painter Pure Red. The sword has details in Shining Silver. I'm not sure what the metal plate on his left shoulder pad is for so I left it in silver. Looking at him now, I wish I'd done part of his backpack in either white or black to break up all the green. 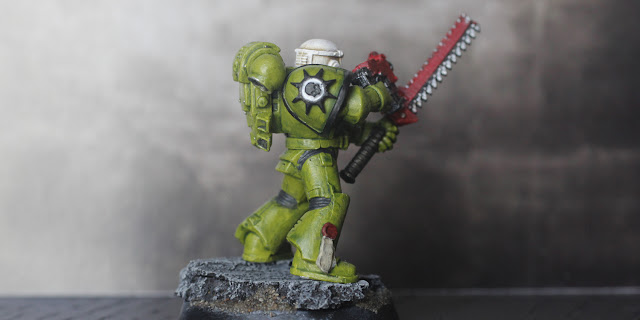 His chapter emblem is a 3D bit painted black and white, and oh look there's a bloody purity seal on his leg (back in the day, purity seals on models were pretty rare; I guess these days the Imperium is dishing them out just for showing up). His pose came about because I didn't want to do another Marine staring straight ahead and thought that having him snapping off a shot with his pistol would look good. And I was right.