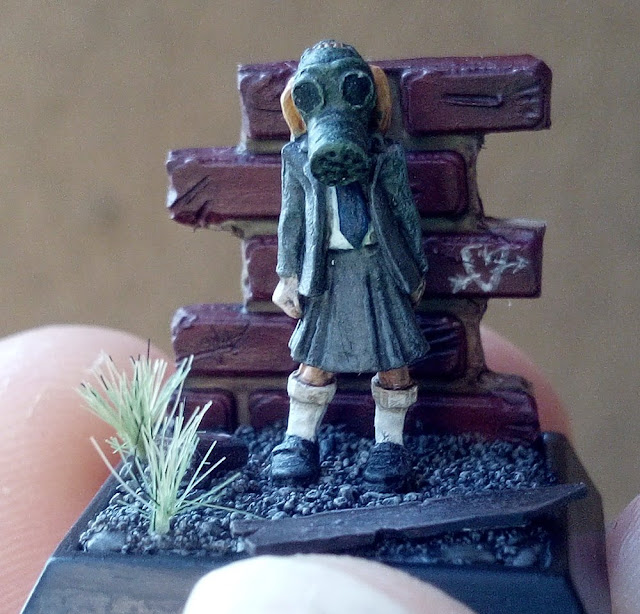 There's a patch of wasteground on Beechwood Avenue where the old primary school used to stand until destroyed by a bomb on the afternoon of April 11, 1941.

Locals have long said that spot is haunted. Pedestrians say there's a cold patch as you walk past it. Kids dare each other to touch the walls, although few actually will. Dogs shy away from the area.

Some people even claim to have seen a small girl wearing a gas mask.

This is obviously rubbish.

But Rose is still waiting for her mummy.


Hasslefree Miniatures make some of the best minis in the business, and the fact they're based in Caerphilly (home of an awesome castle) in Wales (my home country) is a bonus. I have a bunch of their figures which I'm planning on inflicting on showing you lovely people at some point in the future. 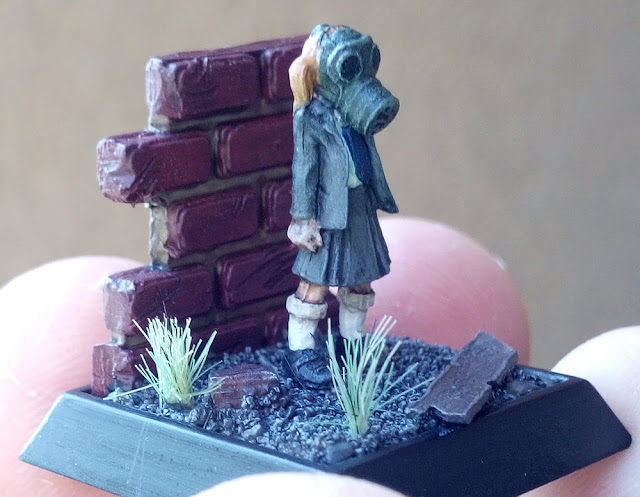 I'm pretty sure Rose is based on some evil wossname from Doctor Who, but as it's one of the new Doctors we don't talk about them. Anyway, Rose is tiny. TINY. It really didn't take too long to paint her, if you ignore the time spent touching up the bits of flesh tone on her skirt or grey on her hands. I chose basic grey for her uniform, dark blue for her tie and stupidly assumed the gas mask would be grey/green but no! Kids' gas masks were actually red so they wouldn't be too scary for the child. Note to self: use the google to check these things before painting them. Also, my dad used to have to carry a gas mask to school but I can't remember him ever telling me they were red. 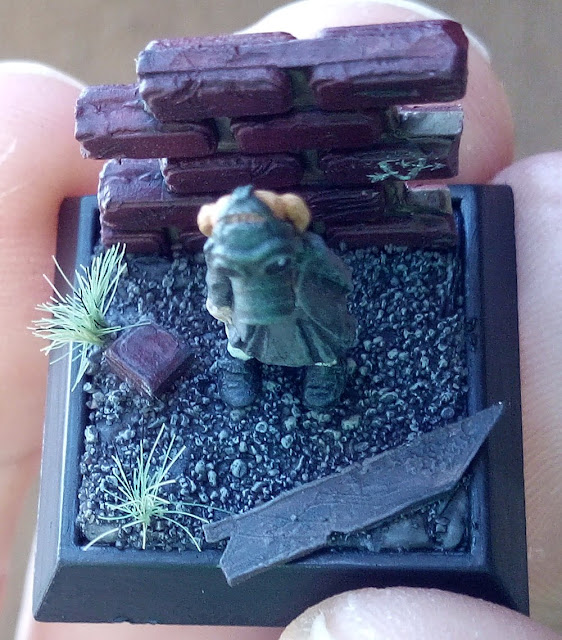 And now for the base. I liked Rose's 1940s look and the idea to do her as some kind of ghost sprang to mind out of nowhere. So, take a 10mm base (anything bigger and she'd be totally lost); some plastic wall; some plastic card; builder's sand; and some static grass. Hack a small bit of wall out of the big bit, scratch it up and paint it brick red (or as close to brick red as you can get; mine is Vallejo Black Red). Glue to base. Cover base with Elmer's Glue, dump on sand, take dogs out for an hour while it dries. Paint sand black and drybrush with greys. Use a couple of dots of yellow to mark where Rose's feet will go, then add the static grass, a hacked-up piece of plastic card and a brick. Glue Rose in place and we're good. 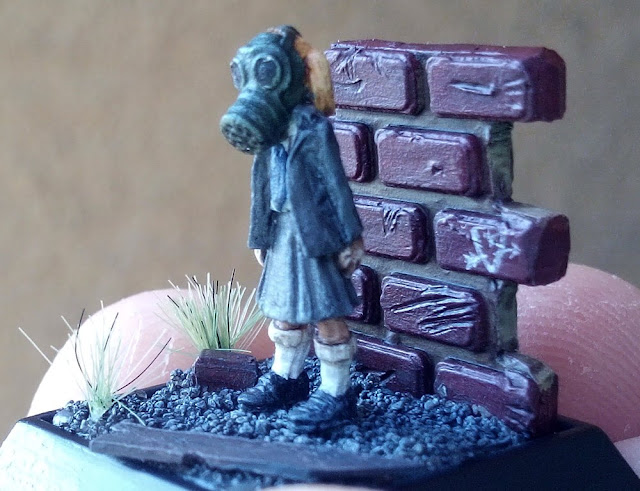 While I was making the base I wrote Rose's story in my head. It's safe to say that this base is the most adventurous one I've done so far. The final touch was the graffiti heart. I wanted to do "Rose lives here" but BWAHAHAA to that. The only thing that's bugging me is that dot of lighter paint on the top of her mask's left lens. I'll have to touch that up at some point, and by "some point" I mean "probably 2031".
Labels: basing, creepy, female, hasslefree, miniatures, small, vallejo