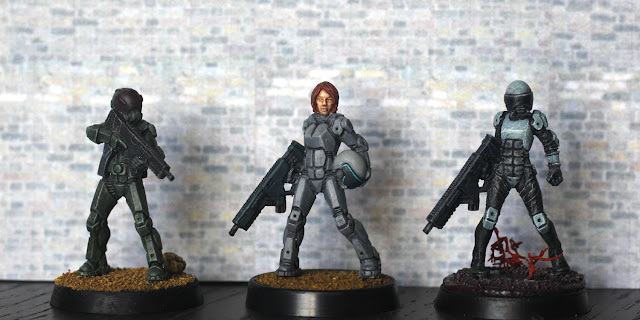 These cool scifi ladies were the first figures I bought from Hasslefree Minis, in late 2018. From left we have Private Chapman, Lieutenant Thoran and Corporal Thoran, all sculpted by Kev White. 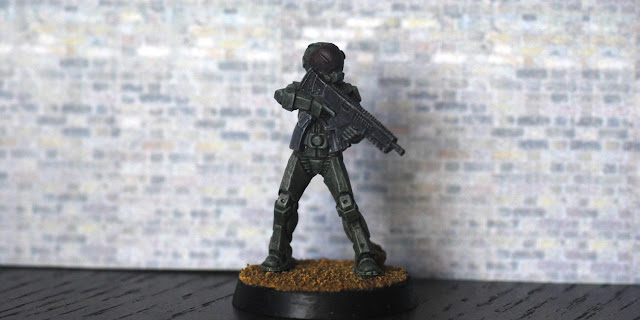 Private Chapman was the first under the brush. I was trying to come up with some uber-cool sci-fi look for her armour and thought about black with a strong contrast colour like lime green, or maybe white with light blue, or grey and orange. As you can see I bottled out and went for Army Painter Army Green for a basic military look. Her gun is Abbadon Black.

Her helmet visor is Army Painter Shining Silver coated with a couple of layers of Red Tone. The base is just greenstuff (this was before I discovered Liquitex Modelling Paste) covered with sand and painted with Army Painter Desert Sand and shaded with Dark Tone. I think that's a small stone behind her left leg. 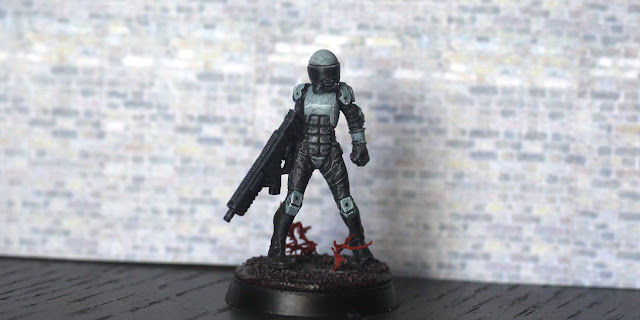 Corporal Thoran was my very first attempt at layering, and as you can see it didn't really work. Again, I spent way too much time trying to come up with a futuristic sci-fi look for her armour and ultimately decided to go with Vallejo Black and Dark Blue Pale. She came out looking OK but I really buggered up the layering, which came out more like drybrushing. I think I underestimated how thin the paint should be.

Her base is more greenstuff coated with sand. It's painted with Vallejo Black Red and highlighted with Army Painter Dragon Red. The plants are just bits of aquarium lichen. It's a shame the base worked so well but the figure didn't. 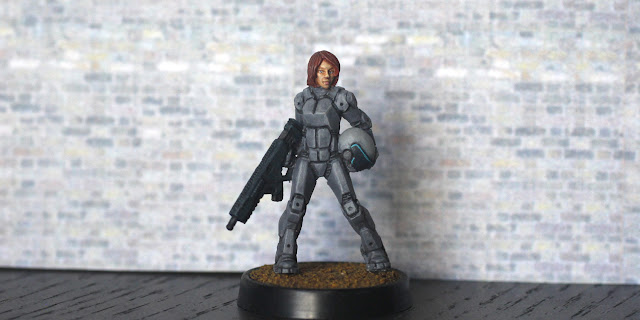 Lieutenant Thoran (she got promoted and is in same pose as her corporal model) took three attempts to get right. I started off with Murderous Magenta by P3 Paints for her amour but once I started to highlight her I though she looked terrible. This isn't the fault of the paint, it's just that I could not work out how to shade magenta and stupidly went with Army Painter Strong Tone — a dark brown — when I should have used green tone. So she took an overnight bath in Simple Green to strip the paint.

The second attempt was red (Vallejo Red and Flat Red, to be precise) but that also went to hell when I somehow got Vallejo Magic Blue all over her back. I still don't know how that happened. Another trip to the Simple Green and she was back to bare metal and then took a vacation in the Magical Box of Unloved Lead.

A few months later I decided to finish her off once and for all. I went for a basic grey look, so I primed her with Citadel Abbadon Black and gave her a once-over with Neutral Grey. She was shaded with Black Wash and highlighted with more Neutral Grey and Army Painter Uniform Grey. Her gun and helmet visor are Vallejo Dark Sea Blue and the visor is highlighted with Blue Green. Her hair is Cavalry Brown and Light Orange. Her base was done in the same way as Chapman's.

As much as I like these minis I don't think the paint jobs did them justice. I'm toying with chucking the first two into the Simple Green and doing them again in a more sci-fi way. With better layering, of course.
Labels: army painter, basing, female, hasslefree, p3 paints, scifi, vallejo