Two things: 1) these three were my first zombies, and B) it was only months after they were painted and in my display case that I realised who they're named after. 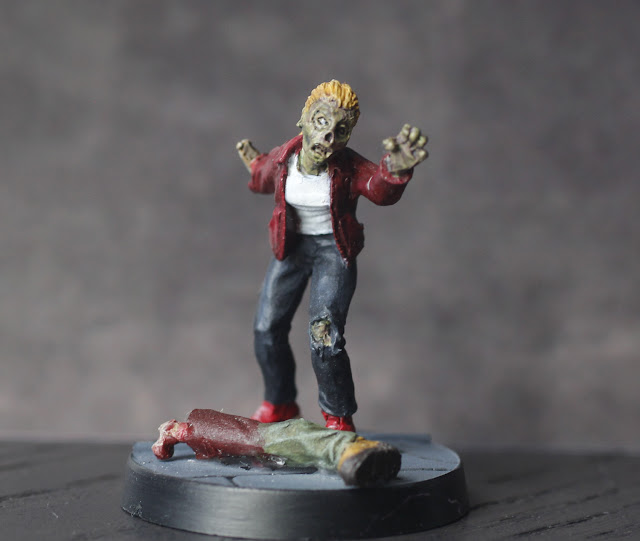 Lucy was my first zombie, bought and painted in October 2018. She's the first figure I tried to paint in red clothing. Both turned out pretty well, especially her jacket as I only had two shades of red back then — Army Painter Red and Dragon Red. Black jeans and a white t-shirt finish off the ensemble.

Her skin was also a first — the first time I tried out what's become my standard formula for painting zombie skin: Army Painter Necrotic Flesh (since replaced by Vallejo Dead Flesh) washed over with Army Painter Green and Purple tones. 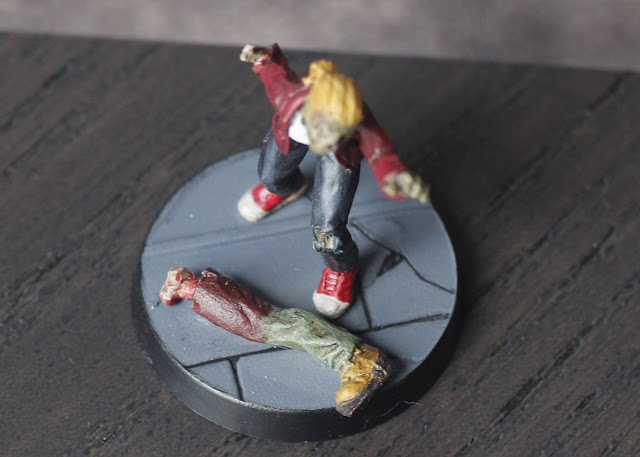 I am absurdly proud that you can tell she's wearing Converse All-Stars. I recently rebased her on my last urban pavement base by Aberrant Games, the ones I've used for other zombies. The leg is from, somewhat ironically, Berkely, Zombie Hunter (scroll down a bit). The plastic version I bought had a bent chainsaw, so I hacked off her leg, drilled a hole in the top and inserted a resin bone from RBJ Games. The boot is Army Painter Desert Sand and the trousers are Army Green. Lucy was painted in my pre-Blood For The Blood God days, so I had to mix up my own gore with various shades of red and a touch of black. 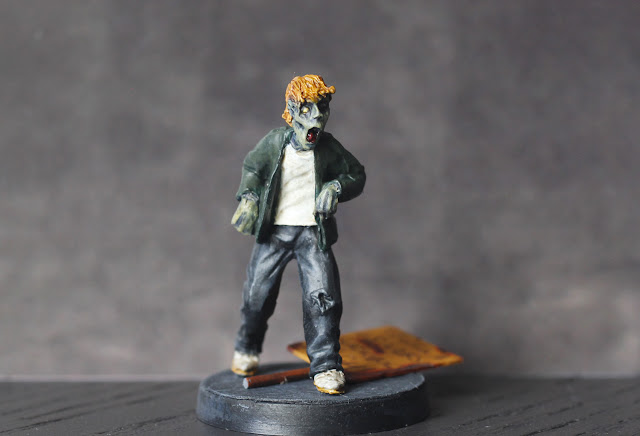 Charlie's hair is yellow. Very yellow. It's so yellow that I have no idea what yellow I could have used to produce such a yellow. His t-shirt was supposed to have a design on it but it's me, so I opted for dirty white. Charlie was painted in the days when my selection of blues was best described as "shit," hence the dark green jacket and black trousers. 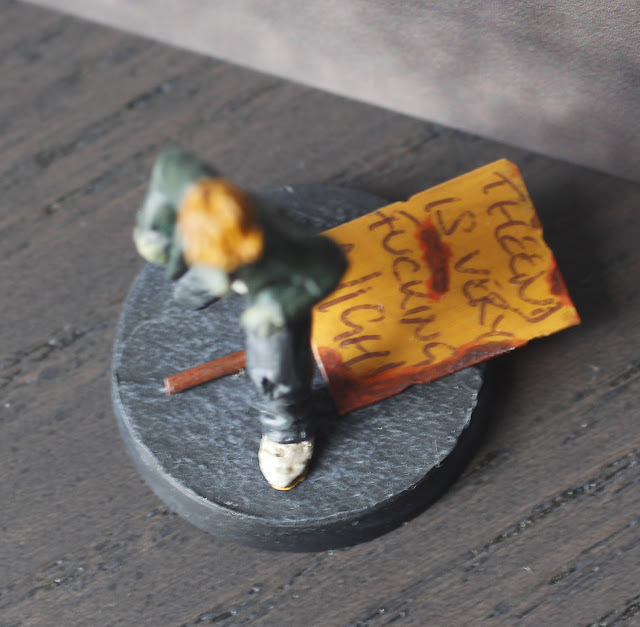 He's stepping over a sign dropped by someone he might have eaten. The sign is just a piece of plastic card painted yellow — why yellow?? I don't know — and daubed with Army Painter Rust Effect. I hand wrote the words (with a biro!) as the idea of me painting readable text is laughable. I nicked the words from this scene in 28 Days Later: 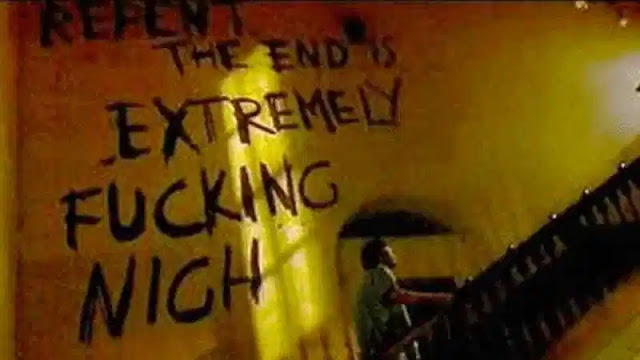 Maybe that's where I got the yellow from. And it's always nice to see us Brits keep our sense of humour, even at the end of the world. The sign is probably going to be redone at some point, i.e. 2056. 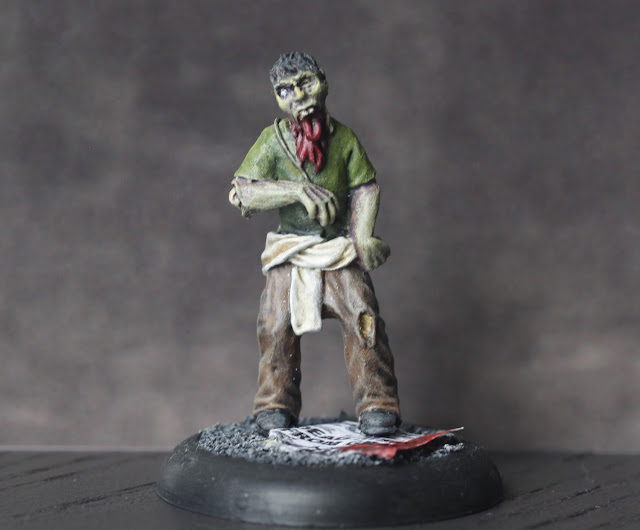 Linus was the second zombie I painted, a couple of months after Lucy. I painted him in the colours I was wearing that day: a green t-shirt and brown shorts. Of course, when your mini's skin is green and you stupidly paint him in a green shirt, you have to use more purple wash on his skin to differentiate it. Even though his trousers were drybrushed, the highlighting looks great.

One of the things that's long bugged me about Linus is the weird strap across his chest. It doesn't actually connect to anything and I couldn't work out what it's supposed to be. A couple of weeks ago I was on Reaper's site looking for minis and took a look at their zombie survivor figures, and I found Gallup, who has a sweater tied around his waist and a guitar slung across his back held by a strap. It didn't take long to discover that Lucy is Joplin and Charlie is Denver. 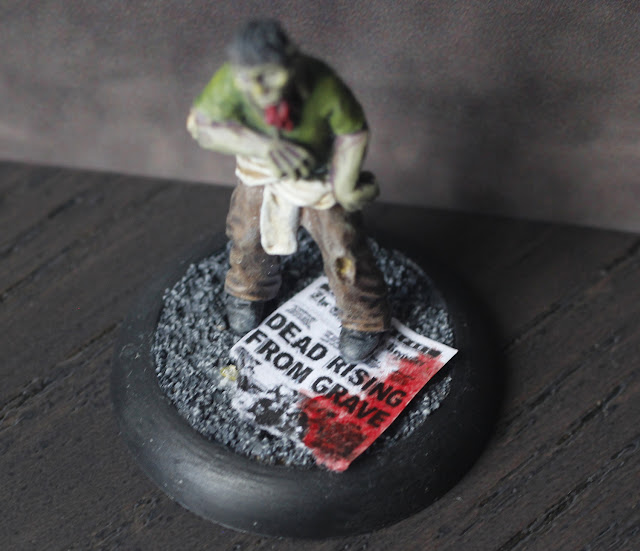 At first, Linus' base was pretty crappy and basically looked like he was shambling across an ashtray. I wanted to add something to it and remembered I had this image of a fake newspaper cover on my hard drive, so I popped Linus off his base, printed the image and glued him back on. While I was daubing the paper with my then-new Blood For The Blood God I remembered that I was (then) a newspaper designer and could have done my own cover. But it was a Sunday.
Labels: aberrant games, army painter, basing, citadel, female, horror, rbj games, reaper, vallejo, zombie