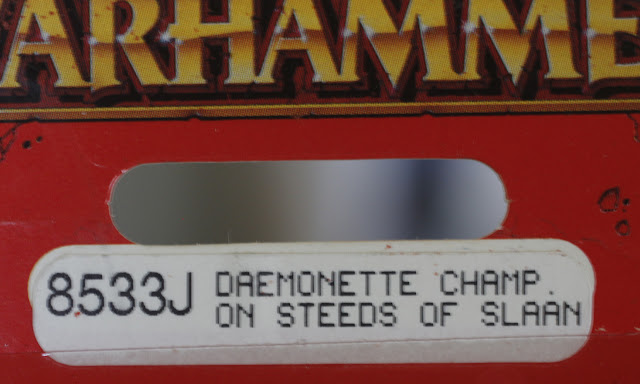 I've been spending a lot of time reading up on and looking at pics of what's known as Oldhammer, the name for the period of Games Workshop stuff from the mid-1980s to the early 1990s. It's partly playing older versions of games such as Warhammer Fantasy and partly collecting and painting older, out-of-production minis. As I don't play any games, you can guess which bit interests me.

The more I looked, the more I began to seriously consider getting some vintage Citadel minis and painting them. Oldhammer seems to be more Fantasy than 40k, so most of the pics I saw were of knights, beastmen, demons, trolls and goblins. And guess what? They're awesome. So I decided to steer away from Space Marines (it's not like I don't own any, albeit plastic ones) and head in a different direction.

I used to play a Slaanesh force in Epic, the game where your figures are 6mm tall and you can field an army of hundreds, if not thousands. I already had a good-sized WH40k Ultramarine army and when I got into Epic I wanted to field a different force. As the classic Realm of Chaos: Slaves to Darkness book was one of my faves (not that I owned it, I just used to read my friend Flynn's copy) I decided on a Slaanesh army as they have the best colour schemes of the four Chaos powers. And Daemonettes, obviously.

Thinking back to those days, I decided on a return to Slaanesh in the form of a warband. This meant I wouldn't need a ton of minis (at least in theory) and to be honest, painting armour in pastel pinks, purples and yellows, and electric blues and greens, seems fun.

The Slaanesh champion and beastmen in the above pic are beautifully painted in what's known as the Oldhammer style: the colours are as close to the 1980s/90s paintjobs as possible (sometimes by using vintage paints found on Ebay) and have a vivid, riotous, anything-goes look that Games Workshop seemed to specialise in back in the days before grimdark became the overwhelming aesthetic. Compare the minis in the above pic to their modern equivalent to see what I mean. And look at that awesome banner, which are another thing that's vanished from the scene. Even Space Marines had them! Also, check out the Realm of Chaos 80s blog. It's fantastic.

Having to try painting like it's 1991 again interests me, although as I don't own any original Citadel paints from those days* I'm hoping my collection of Vallejo and Army Painter does the job.

Followers of Slaanesh usually wear pastel and/or vivid shades, so I've selected the above colours as my basic palette. I'll also use black and metallics where needed and I've ordered Vallejo Metallic Medium so I can make my own metallic shades. I forgot to include Red Violet, Turquoise, Violet, Blue Green and Emerald in the photo, but I'll be using those too. 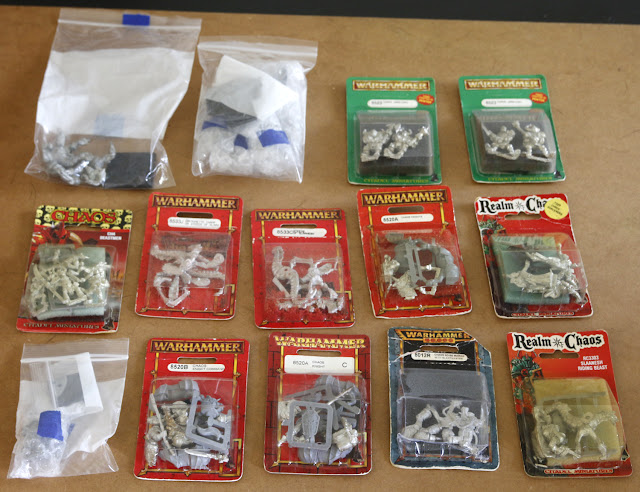 On the top row we have a Keeper of Secrets and a bunch of Chaos warriors.

The middle row has Beastmen, Daemonettes on riding beasts, a Chaos Lord and horse and Chaos sorcerers.

And on the bottom row are Chaos thugs, Chaos knights on horses, an Emperor's Children Noise Marine and a Chaos Renegade on a riding beast (the latter two are not part of the warband, I just couldn't resist buying them).

I also have a Chaos champion and a Daemonette champion heading my way in the mail. I forgot to buy some Fiends, but seeing as right now spending more on Ebay will probably end in death by Latina, they're going to have to wait.

I have to come up with a plan to paint these, and not just do them randomly like the way I paint my minis now. The Keeper of Secrets, knights, horses and riding beasts all need to be assembled and I can foresee some greenstuff-inspired shenanigans heading my way, so I think I'll start with the two thugs. I also have to learn to base in the Oldhammer style as well as paint banners and shield designs.

This is going to be interesting.

*Back in 2016 I found my old paintbox in my parents' garage in England. It was still full of 1990-era Citadel paints, some brushes, a couple of unpainted metal Space Marine minis and even a tube of superglue. As this was way before I got back into the hobby I rummaged around in it for old time's sake, took a photo (since lost) and put it back on the shelf. Fast forward two years: I'm painting minis again, mum's moved house, and guess what didn't survive the move? Yep.
Labels: 40k, citadel, fantasy, games workshop, oldhammer, slaanesh, warband