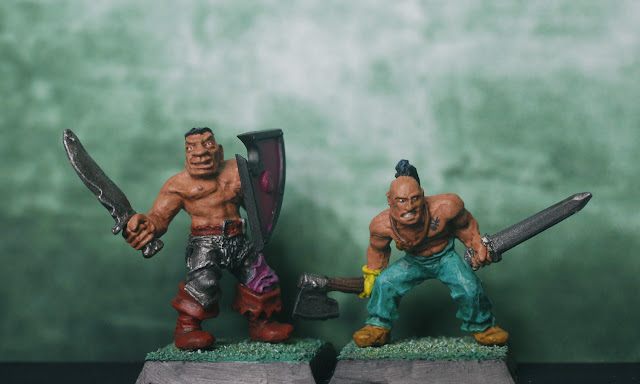 Meet the first two members of my Slaanesh force: Jilas, left, and Houmon. 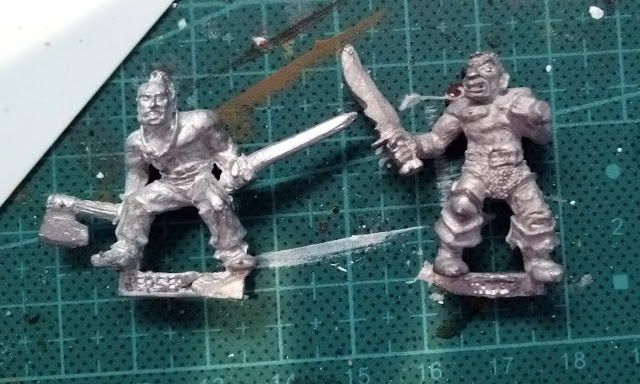 Here they are in their untouched, original 1987-vintage bare metal state. They were missing the original packaging but as I was only going to open it and chuck it away, that wasn't a problem. At first I couldn't work out why the one on the right is caressing his nipple, but then I realised:

1. It's just the position of his arm so he can hold his shield.

2. He's a follower of Slaanesh — nipple self-stimulation is basically mandatory.

Both these sculpts exude character and after cleaning up the minimal flash and prepping them, I painted both in one day, which for me is amazing (the P in PM Painting should really stand for Procrastination). 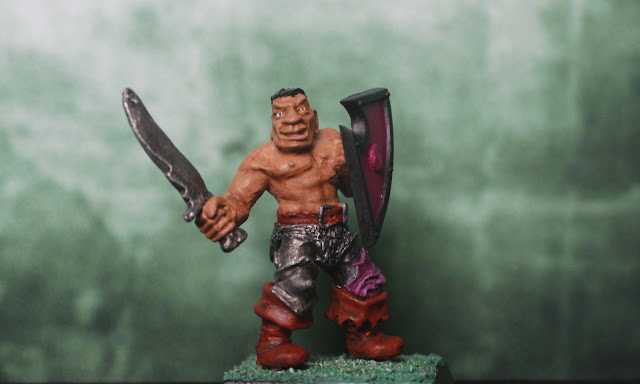 Jilas was a joy to paint. I googled around to find a good recipe for a barbarian skin tone and discovered that a 50/50 mix of Vallejo Medium Flesh and Brown Rose was the way to go, with more Medium Flesh added for the highlights. His face is wonderfully expressive; I can't work out if he's sneering before disembowelling his opponent, or blissfully filled with the happiness of Slaanesh before disembowelling his opponent.

His leg armour and sword are Army Painter Plate Metal washed with Vallejo Black and Sepia washes. His boots and belt are Cavalry Red and the daemonic kneepad is Wizard's Robe and Pink.

The only letdown is Jilas' shield. There are people who can paint fantastic designs onto these tiny plastic shields, but I'm not one of them. I just painted it in Wizard's Robe and did the back and edges in black. I have an idea for a straightforward shield design, so I might try it in the future. 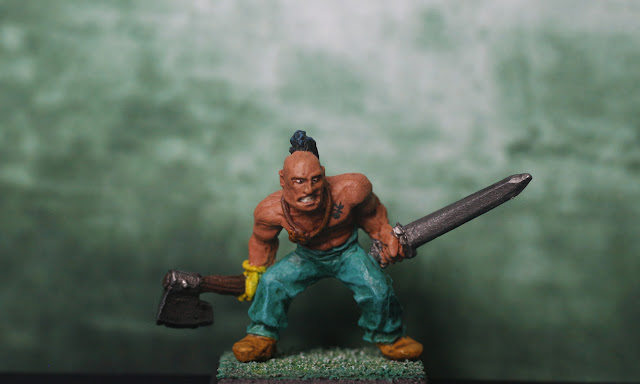 Houmon's skin was done with the same mix I used for Jilas. He's rocking a tat that I painted after finding this tutorial. It's not perfect but at least I was able to freehand the Slaanesh icon without it looking like a total potato. You can tell Houmon was sculpted in the 80s from his single Michael Jackson-inspired glove, which is painted in the very apt Army Painter Daemonic Yellow. His trousers are Vallejo Emerald Green and shoes Gold Brown.

The only real issue I have with him are his eyes, which really don't look too good. Luckily every other Slaanesh mini I'll be painting is either i) wearing a helmet or ii) an horrific daemon with black soulless eyes, so yay!

Both have basic bases: a covering of sand painted Park Flat Green, daubed with yellow and brown inks and highlighted with Skeleton Bone, which apparently was the way bases were done back before basing accessories became a trillion-dollar industry. At least I don't have to use the lime-green flock my Ultramarines were based with.