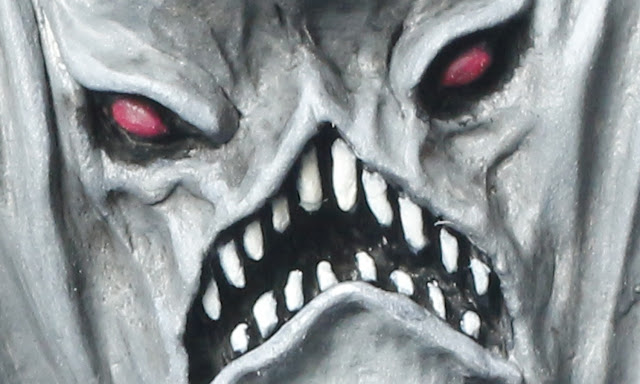 With teeth like that he must be British. I'll call him Derek. 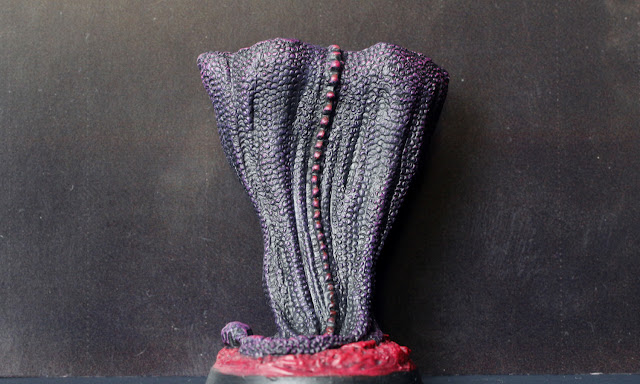 I think I bought Reaper's Cloak Fiend back in December. It's another mini that i) looks cool and ii) pushed me to the free shipping target. With Monster May(hem) ending soon he was an obvious choice for one final figure. When it came to painting him, I started with his back as it was less intimidating.

I wanted Derek to have a dark back with a contrasting colour but didn't want to use colours like green or purple as I've already done those. Orange was out, too. I stared into the abyss that is my paint collection and decided on reds.

Once painted black, Derek's back got a wash with Army Painter Purple Tone and then successive drybrushes starting with Violet Red, then Warlord Purple, then Pink. Thanks to my FLGS Brookhurst Hobbies opening up last week, I'd picked up Vallejo's fluorescent paints so I added Magenta to the mix as a final highlight and all down the spine. 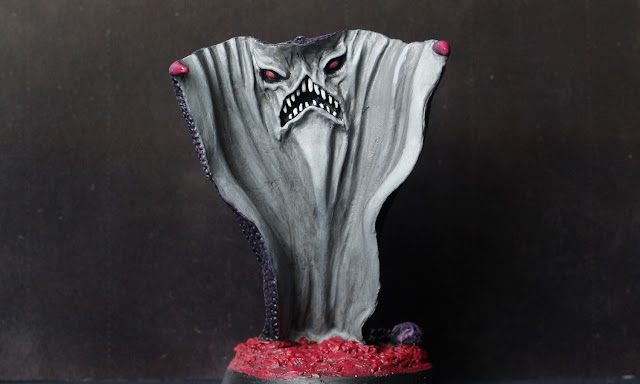 The reason I found the fiend's front a more daunting prospect was getting the highlighting on all the folds right. I mean, it shouldn't be too difficult as they're so pronounced but blargh. I started with a base of Vallejo Neutral Grey and added a coat of Black Wash, which in hindsight was a mistake. The highlights are Army Painter Uniform and Ash grey, then Vallejo Ghost Grey. I was tempted to go up to white but decided to cut my losses.

His eyes and claws are Red Violet layered with fluorescent Magenta, and his teef are Ivory.

Derek's got an integral base (AAARRRGGHHH) so I superglued him to a 30mm base and went to work with the modelling paste. Once dry it got a coat of Vallejo Red, a wash with purple tone and a thorough drybrushing with fluorescent Magenta.

So that's my final entry for Monster May(hem). It's been an absolute blast, and I said on a previous post, I don't think I've been so productive since painting up my Ultramarines 30 years ago. Here's the honour roll of the other participants:

Jeremy from Carrion Crow’s Buffet is working on a pair of Cyclopian Aliens.

Keith at Dead Dick’s Tavern and Temporary Lodging has painted an Owlbear, Rrrraaaaaang, a giant scorpion and has not only painted Mugato but also managed to get an exclusive interview with him.

Dave Stone from Wargames Terrain Workshop has painted an Oriental dragon, some Kroot and a Star Wars Bantha.

Harry at War Across the Ages has painted a high elf dragon, two unicorns and four treekins.

Roger from Rantings From Under the Wargames Table has finished his superb original sculpt, based on a creature from the 1960s British movie Island of Terror.
Labels: basing, horror, monster mayhem, painting challenge, reaper, vallejo