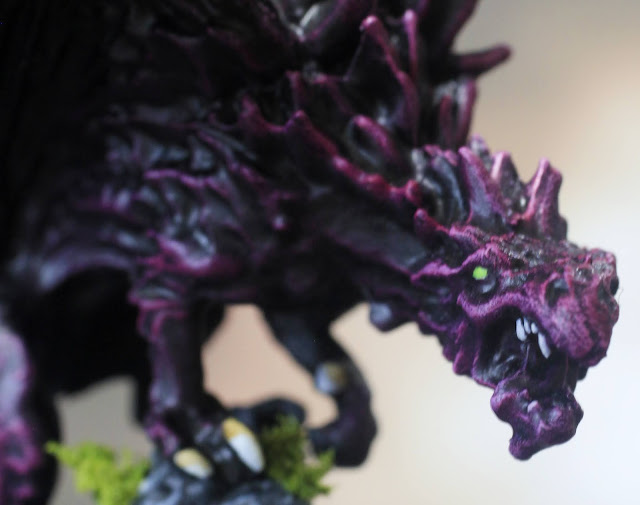 In case anyone is thinking "wait, this looks familiar", it's because I got 90% of the way through painting this dragon when I realised I was using the same technique and pretty much the same colours as I did for my byakhees back in May. Oops.

This model was going to be one of my entries for Monster May(hem) until I got stuck into the Cthulhu: Death May Die box. I bought this mini about a year ago, and it's my second Temple Dragon; the first (thankfully unpainted) one was chewed up by Erebus. As she'd also previously eaten one of these dragons we probably should have auditioned her for Game of Thrones. 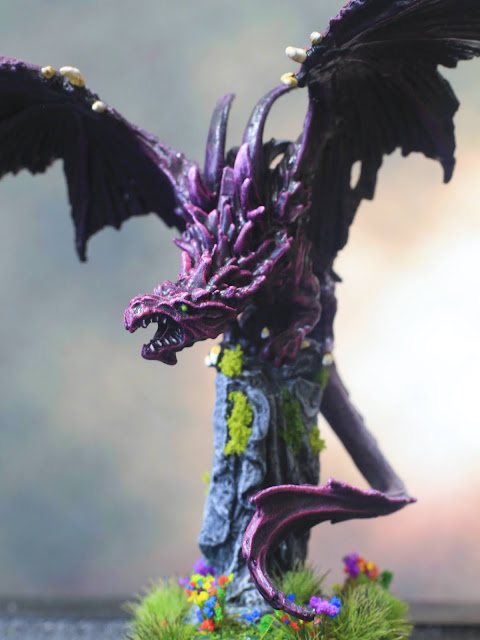 Anyway, painting. The model comes in separate pieces — body/pillar, wings, spines and tail — so after gluing it together, filling the more egregious gaps and sticking it to a 25mm base, I sprayed it with black primer. As its whole surface is heavily textured I decided to go with an overbrushing technique with a high-contrast colour. If I'd put some actual thought into it I'd have gone with blues or greens, but no, I went with reds. 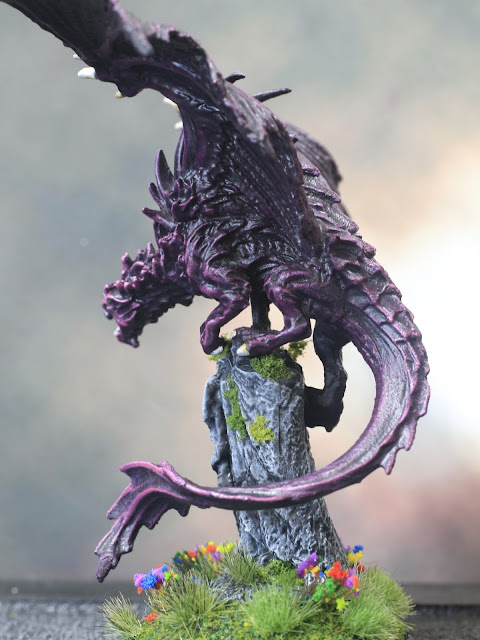 I started with a size 5 flat brush and a pot of Citadel Barak-Nar Burgundy, which I bought a while back because Vallejo doesn't really do a burgundy colour. The whole dragon got an overbrushing with it from front to back on the wings and straight down on the body and tail. I gave the top three coats and the underside one coat to keep it darker.

I cracked out the Red Violet and did the same thing again, only using less paint and trying to build up the highlights in a kind of "layering without actually layering" way. I gave it a decent amount of time to dry, then varnished the dragon to protect the paint. 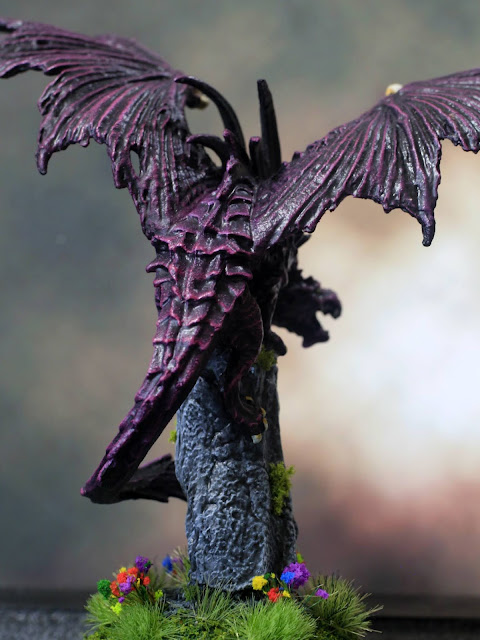 For the third highlight I used Sunset Red, a hot pink, and lightly drybrushed over the most prominent areas. It was at this point I started to realise I'd basically done this whole colour scheme before, and a glance at my display case confirmed it. Bugger. It's annoying, but it's not like I'm going to start again. I cracked on with the application of Sunset Red until I reached a point where I was happy, and gave it another coat of varnish.

Then came the internal debate about doing another lighter drybrush, and I decided to go for it using Pink very kind of not very sparingly. After that I painted the teeth and claws with Ivory and Off-White, and the eyes with Scorpy Green. 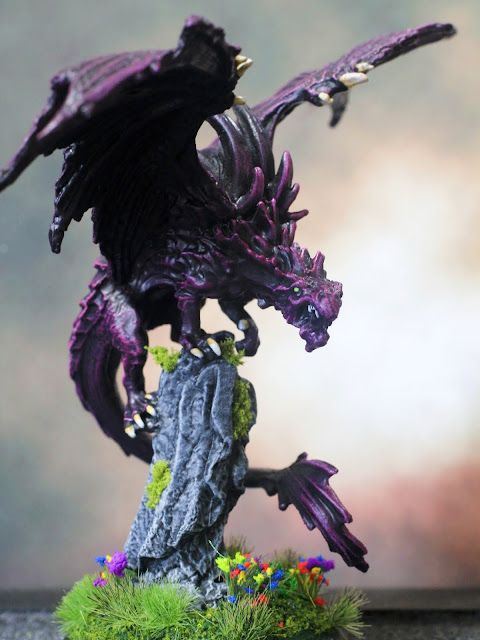 Now it's time for the pillar. I thought back to painting my Angels of Sorrow and how I wish I'd started the stonework with a lighter grey, so I began with Mechanicus Standard Grey and washed it with Nuln Oil. Then I used Grey Seer and Ghost Grey to highlight it and hopefully make it a bit more stonelike. Once finished the whole model got a coat of matte varnish.

The only thing I needed to change was the 25mm base because it was too small and as a result I kept knocking the model over. So I glued it to a 45mm one, used modelling paste to cover the gap, painted it Heavy Black Green, covered it in PVA and finally slapped on the flock, tufts and flowers.

Despite the drybrusing being a bit chalky I'm really happy with the job I did on the dragon, and it's a good looking model. Thankfully there were no bent pieces — which is a bit of a shocker for a white plastic Bones figure — and it fitted together well and the gaps were easy to fill. And let's face it, as I'm Welsh it's about time I painted a dragon.