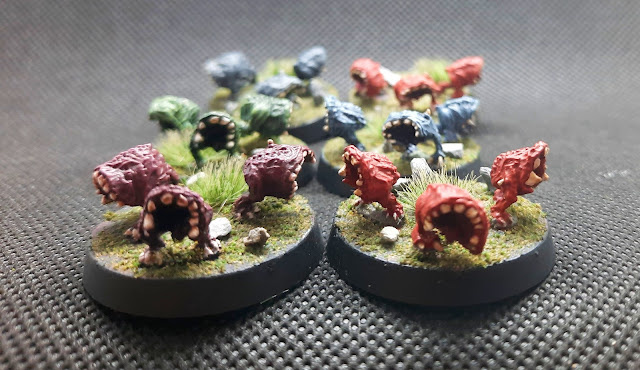 There's a rustling in the undergrowth that you can't identify. Peering closer, you see what looks like a mouth on legs standing in the tall grass. You just about manage to whisper "what the..." before you're swarmed by small creatures. All you can feel is teeth before darkness mercifully envelops you...

I bought these 'orrible little things a couple of years ago after spotting them on Nobel Knight. I didn't really think twice about shelling out on them because they're so unique and creepy. I have no idea what muccins are and google came back with just the Noble Knight page. I posted on the Reaper forum asking if they were a D&D creature or if anyone knew anything about them. Someone responded that sculptor Simon Fraser had the idea for them and just knocked them up, and then I found a post on TMP explaining that they're fantasy or sci-fi vermin that work with 28mm or 15mm scale models.

I got 20 in a bag and, with Monster Mayhem in full swing, it's about time I got them painted. They didn't come with bases so I decided to put three on a 32mm base to see what it looked like. It worked, so I went with it. After finishing them I wish I'd put four on each base but here we are. 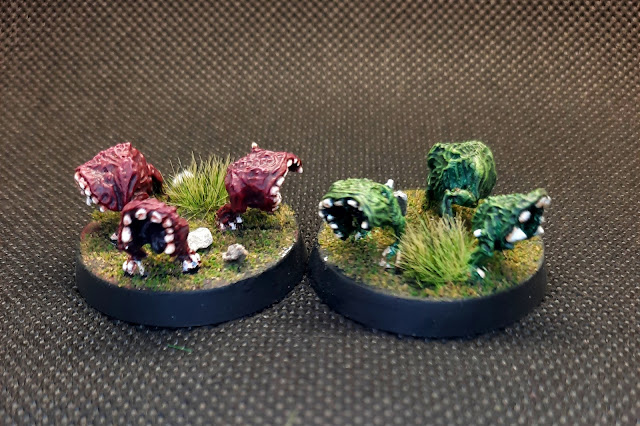 I didn't even bother priming these chaps and just painted straight onto the metal. After gluing them all to their bases, I started with the red ones above. A coat of Barak-Nar Burgundy covered really well, and they were given a first drybrush of Mephiston Red and a second of Sunset Red.

As I didn't fancy painting 18 identical colours, the second set was basecoated with Caliban Green and then highlighted with some Park Flat Green and Yellow-Green. 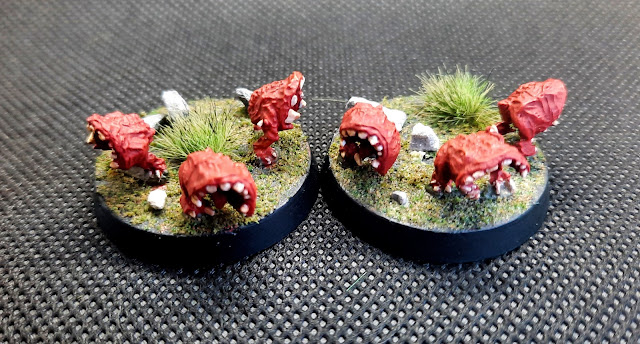 I kind of goofed here; I painted a set with Mephiston Red, Vermilion and Wild Rider Red, and then went to bed. In the morning I remembered the scheme but forgot I'd already painted it, which is why there are two sets in the same colours. Whoops. I went a bit darker with the final pair. One was painted Abbadon Black and highlighted with Stormy Grey and Neutral Grey, and the other Stormy Grey with Blue-Grey and Ash Grey highlights.

Now for the teeth, and there's a lot of them. I used Ivory and shaded them with Serpahim Sepia, and at this point I realised they also have claws on their feet. More Ivory and they were all painted.

The bases got a coat of thinned PVA and were flocked with the same mix I used for Rocky. Once dry, the flock was sealed with more PVA and I attached some tufts and very small stones from the backyard. 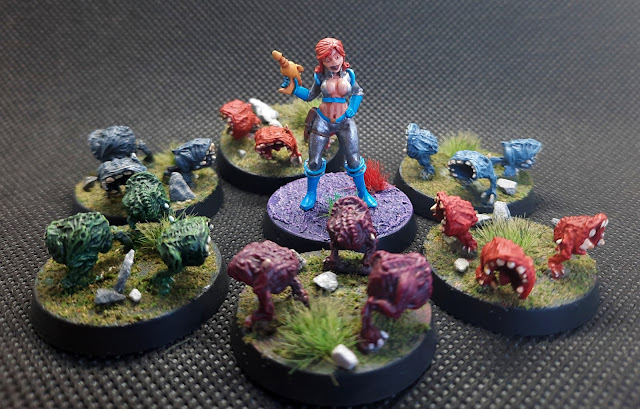 For scale, here's Betty being swarmed. Like the gremlins and Rose the muccins are among the smallest minis I've painted, but they were pretty straightforward and fast to do and they definitely stand out. After all, it's not like I've painted ambulatory mouths before. The dark red ones are my faves, and if I was to redo these it would be in that scheme.