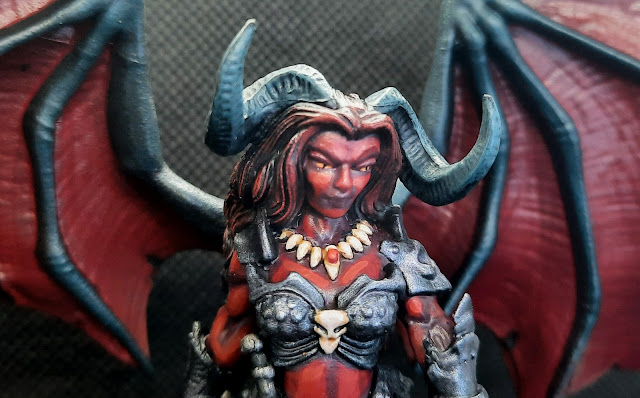 I have the distinct feeling that this queen doesn't like corgis. 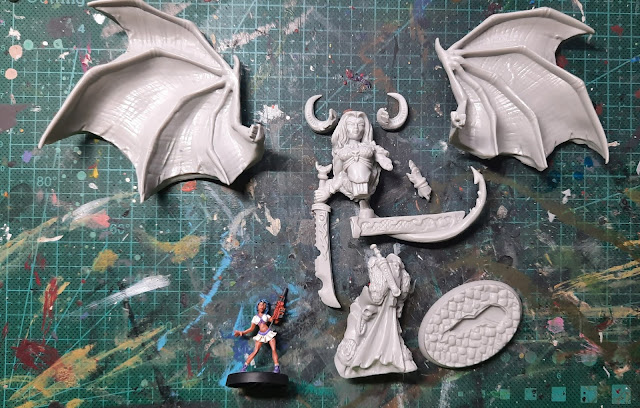 Here she is in all her majestic pre-assembly glory, with Candy for scale to keep Dai happy. I'm going to do my own base so the plastic one to the right is going in the bits box. I'm also going to paint each bit separately, which will probably be a recipe for disaster but then again would it be a Matt blog post if something didn't go wrong?

I did glue her horns into her head, but left her right arm, wings and tail off for now. Thankfully, despite being a Reaper Bones mini, there are no bent bits, but then again she's the harder light-grey plastic and not the white stuff made from plasticine and snot. 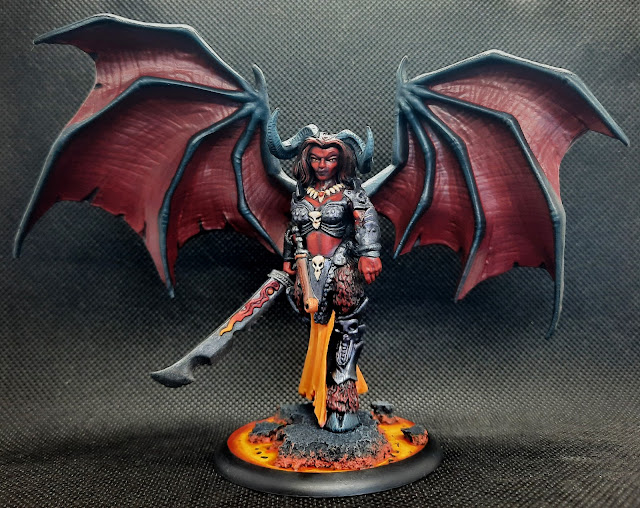 I kicked off by spray-priming her black, and then spent an age deciding where to start, eventually going for the skin tones. I wanted to use a darker colour than the usual Khorne Red, so I began with a couple of thin coats of Barak-Nar Burgundy over her exposed torso, face, arms, tail and wings.

While that dried I painted all of her fur, hair and armour Black-Grey, and her sword Mechanicus Standard Grey. 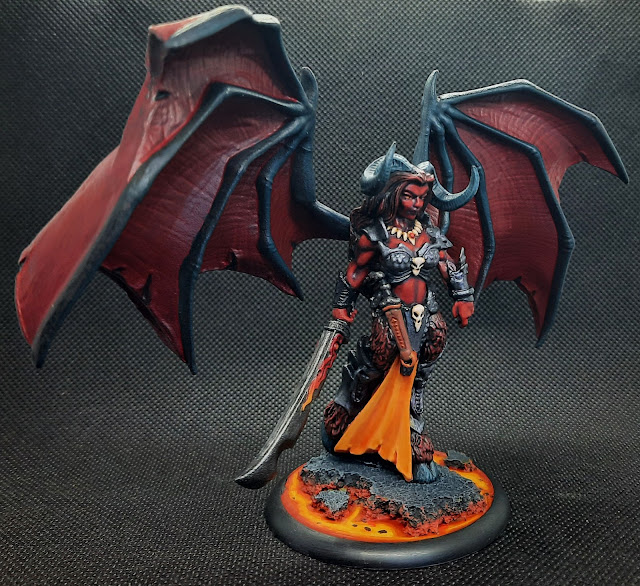 With the base colours down it was time for the reds, going with her wings first. A couple of thin coats of Khorne Red got things started, and then I used layers of Mephiston Red, Vermilion and Wild Rider Red on their backs. I didn't want the red to go as bright as Eilluvasheth, so I didn't use any yellow.

I kept the front of her wings darker, with just a couple of layers of Mephiston Red over the Khorne Red. In retrospect this was a mistake as they could do with more highlights, especially along the bottom. The wing bones were painted Black and highlighted with layers of Deep Sea Blue until I got the look I was going for. Her horns were painted the same way. 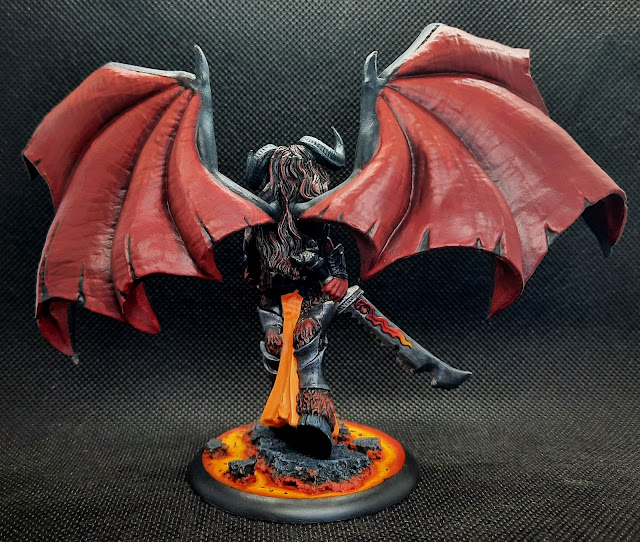 Her skin was painted the same way as her wings, and I have to admit that layering doesn't scare me as much as it used to. Once I got it to the right level of heat I washed it over with Carroburg Crimson, which was a bit of a boo-boo as it darkened the highlights too much. I wasn't in the mood to redo them, so I left the skin and moved onto her armour.

Her hair and fur were drybrushed with Khorne Red to keep the hot theme going. 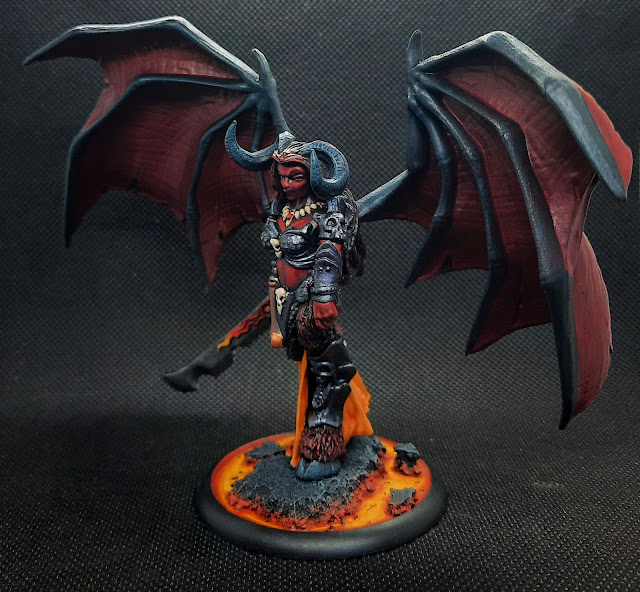 After debating iron, steel and brass, I went with something a bit different and mixed Carroburg Crimson, Metallic Medium and water to get a very thin glaze and just painted it over the armour to get a subtle metallic effect with a touch of red/pink. To highlight the edges I used plain Metallic Medium as I didn't want solid lines.

It was at this point I realised her tail had vanished into the Bermuda Triangle that is our spare room. After spending a good 30 minutes looking for it, I gave up. I debated making one from greenstuff, but then I figured I could get away without it. She's the Queen of Hell, it's not like we're going to be staring at her arse.

Her loincloth(?) (it's a tabard, thanks Dave!) was originally going to be Ivory to break up all the reds and blacks, but I could not be bothered painting six coats over the black to get it to cover. Instead I gave it two thin coats of Heavy Orange, then mixed in some white for the highlights, and once dry it got two layers of Casandora Yellow.

Her sword is Plate Metal, and the flame design is some of the best layering I've done in my life. The last part to be painted was her dagger sheath, using Chocolate Brown, Burnt Umber and Mahogany Brown, with Plate Metal and Copper for the metal bits. Wait, the last bit was actually her eyes, which are painted White and Yriel Yellow with black slits.

And now for the base. 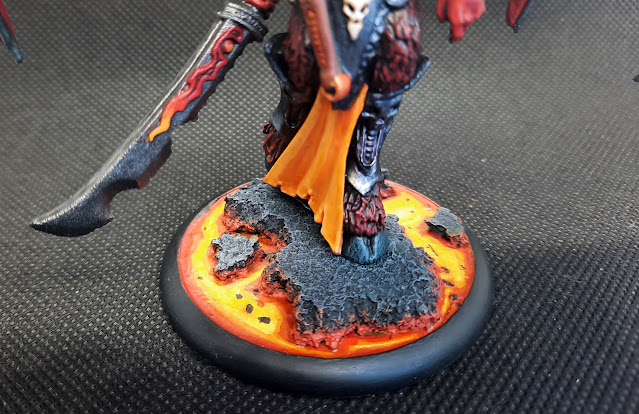 I've painted two lava bases before this one, the first for Devil Girl and the second for Elli. Those were 25mm and 32mm bases, and this one is 60mm, so it was a bit of a challenge. I used bits of cork tile for the rock, painted with black craft paint and highlighted with Mechanicus Standard Grey mixed with a bit of Bonewhite.

The lava was painted in the same way as the Queen's skin, with a few more colours: Khorne Red, Mephiston Red, Vermilion, Wild Rider Red, Bright Orange, Yriel Yellow and White. Because of the large areas of lava, and because I can't follow a tutorial for the life of me, there was way too much white so I went over the paint with Casandora Yellow to get it back to a more orange look. I painted a couple of skulls to put on the smaller rocks and totally forgot to stick them on. Duh.

So that's my first entry for Monster May(hem) and I had a blast painting her. I'm incredibly happy with how she looks, and in terms of technique it's really boosted my confidence when it comes to layering.

I have more monsters in the pipeline so I'll get another one done soon, although I very much doubt I'll beat last year's output. 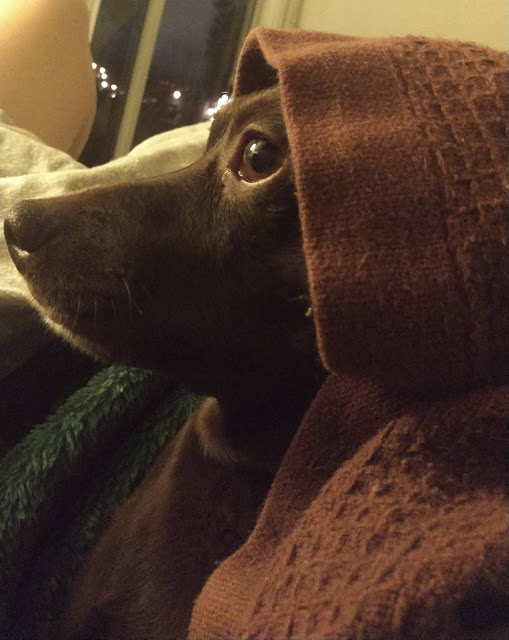 Finally, with it being May Fourth, people (well, Dave) have been posting pics of their Star Wars minis to celebrate. As I don't own any, here's a pic of Cadbury in his Jedi robes. As Luke once said to Gandalf: live long and prosper.