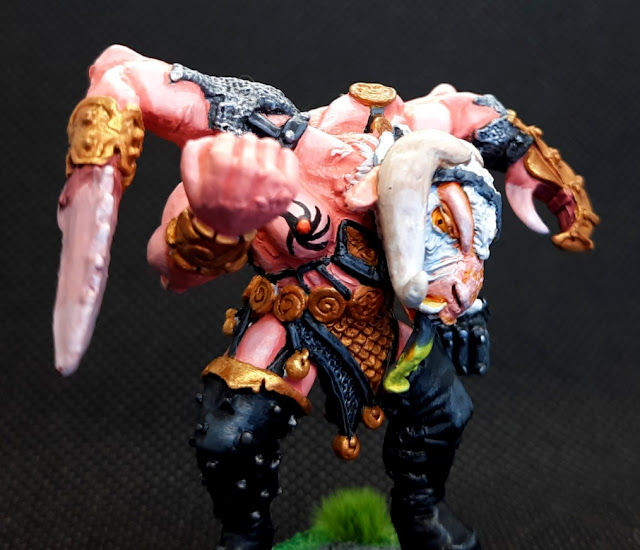 There's nothing like spending a humid Saturday morning scraping dried glue off a Chaos daemon. At least I'm assuming it's dried glue. This is, after all, a Slaanesh daemon. 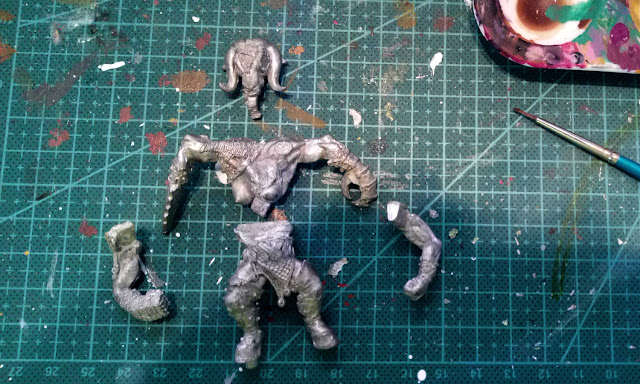 Here he/she/it is relaxing after a good scrubbing with hot water and Dawn after being disassembled and scraped clean of glue. And no, Dawn is not the name of a lucky Daemonette. Like the Renegade Slaanesh Rider, this metal monster was part of the large eBay order I made in 2020, so it's been hanging around for a while.

I've read online that the original Keeper of Secrets is a nightmare to put together, and that's an understatement. Just dry-fitting the bits together was an exercise in swearing. Trying to put its arms in precisely the right spots and holding them in place while you fit the chest piece without at least one part heading straight to the floor is an impossibility. And the gaps, especially between the chest and stomach at the front and arms and shoulders at the back, rivalled the Grand Canyon in places, so I had to mix up a whopping ball of greenstuff and cram in as much as I could.
That said, the first-edition KoS is a great sculpt and here's why:
1. It's so Oldhammer that it hurts.
2. High-heeled thigh-high boots and a suspender belt.
3: The classic single boob.
4: The eyepatch.
5. Did I mention high-heeled thigh-high boots?
I didn't want to keep referring to the daemon as "it" so I used the original Realm of Chaos: Slaves to Darkness daemon name generator to come up with a suitable moniker. Rolls of 9, 2, 10 and 17 gave me quiver, suck, slash and spurt, and you can't get more Slaanesh than those. Quiverslashing Suckspurter it is! 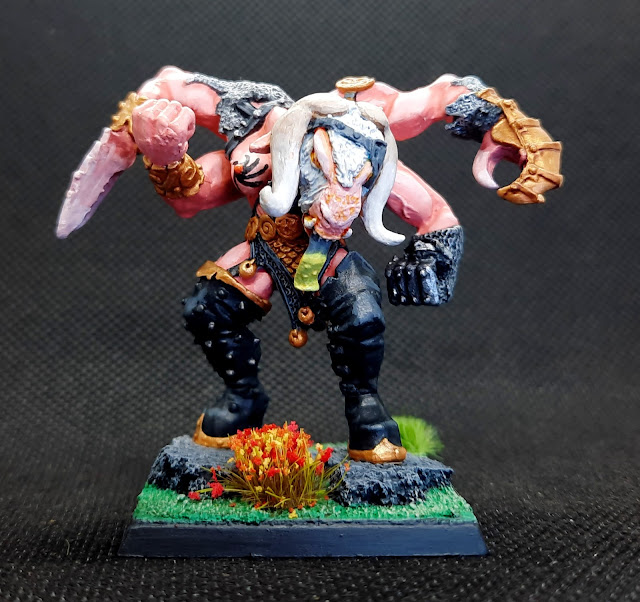 A great sculpt it may be, but it wasn't a great painting experience. After all the greensetuff and superglue had dried and the bits were thoroughly stuck together, Quiverslashing was glued to a temporary base and sprayed with white primer.
Because I wanted Quiverslashing to have light skin, I did all the dark parts first, starting with all the black areas. Then I basecoated anywhere that was going to be gold with Filthy Brown, and anywhere that was going to be silvery Mechanicus Standard Grey.
With this being an old metal Citadel model there are the usual unidentifiable bits that could be actual features of a Chaos Greater Daemon or could just as easily be crappy moulding. I basically took a guess as to which they were and painted them appropriately. 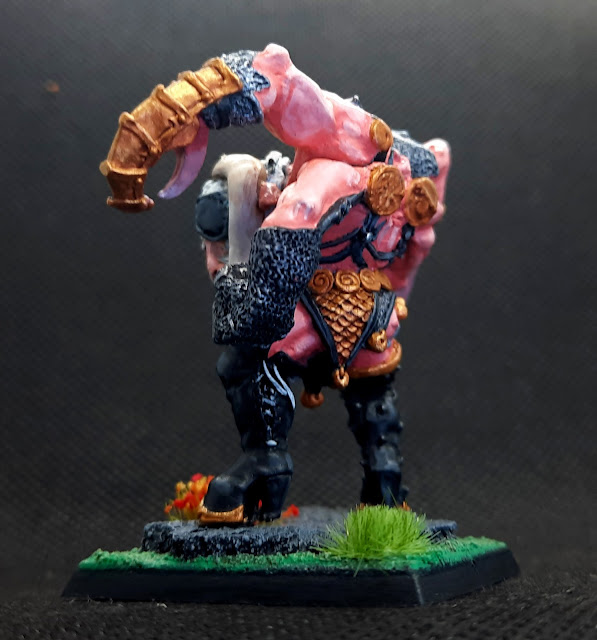 I cracked out the Brass and painted all the gold parts. I'm not a fan of full-on gold so Brass is my fave substitute, and once dry it was washed with Seraphim Sepia to deepen the colour and tone down the shine a bit. A light highlight with Polished Gold finished them off. The chainmail was drybrushed with Iron Warriors, shaded down with Nuln Oil and then drybrushed with Shining Silver.
Despite seeming straightforward, it was a bit of a pain, with me getting metallics on the wrong areas thanks to crappy brush control. And there are so many areas that need to be metallic, at least four of which I overlooked just when I thought I was done with them. But that's the fiddly bits out of the way!
Quiverslashing's iconic Slaanesh crab claws were next, and they're the one part I'm not happy with. I went for an actual crab look using Brown Rose and Seraphim Sepia, and then I added some white for the layering. The left open one is OK but the right one looks like it's been used for stirring paint. 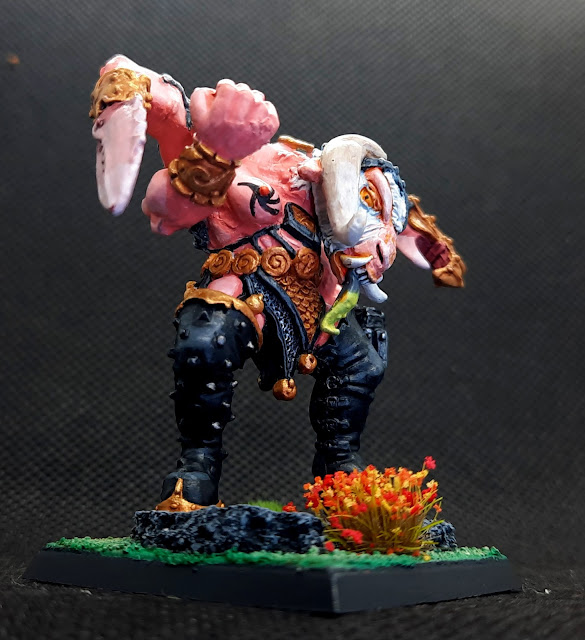 Next was the body. I really didn't want to use a "classic" Slaanesh colour like bright blue or pink again, and I did toy with the idea of painting Quiverslashing off-white. But in the end I went with orange, using Heavy Orange as a basecoat (well, three coats to cover the errant bits of black) and then a mix of Heavy Orange and White for the layering over the muscles.
I used pure Heavy Orange to define around Quiverslashing's muscles a bit better and clean up the inevitable layering errors. Then I thinned some Black, took a deep breath and applied a tattoo to Quiverslashing's boob, before emphasizing the nipple with Bright Orange.
I'd left the head off to be painted separately. For some dumb reason I painted the hair Andrea Blue and immediately changed my mind, so I had to go over it with Corax White and then pure White. If you look closely you can see where I missed some of the blue AAARRRGGHH!
The eyepatch is just Black and Neutral Grey, and his eye is Yriel Yellow. The horns are Ivory and Bonewhite over Bone Shadow.
Finally, I highlighted the black areas with Mechanicus Standard Grey and Neutral Grey. Once the head and body had been given a couple of coats of matte varnish, the head was glued on and left for a good 20 minutes to dry properly. 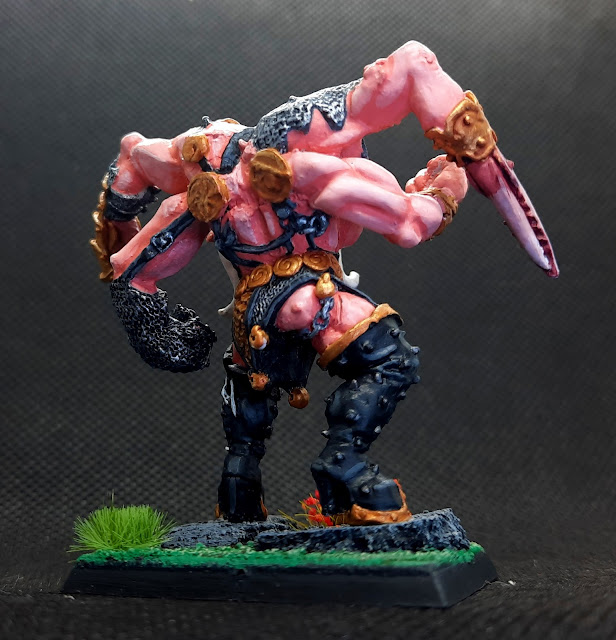 The base was the easiest part. I wanted the Keeper of Secrets to be standing on rock, so I used a couple of bits of cork and sliced them horizontally so they'd be at an angle. After supergluing them on, I painted the base with PVA and dumped on a couple of spoons of sand.
After leaving it overnight, the rock was painted with craft paint and the sand with Park Green Flat, homemade yellow wash and some Light Green. I added a couple of tufts and then superglued the daemon on. I probably should have thought ahead and pinned it, but it's stuck on well and should be OK.
So after all that, am I happy with Quiverslashing? Yep! Apart from the claws I think it turned out looking good; the orange skin works, and once I'd stuck on the head it looked a hell of a lot better. It was well worth the effort and I've always had a soft spot for the original Keeper of Secrets despite its awkward pose and high-heeled thigh-highs. They are a hell of a lot easier to paint in Epic scale!

I have to admit, I got sick of it which is why I painted the Keeper of Secrets. I'm going to finish it, but endless layering of paint and overthinking how to attach the conversion bits just killed my enthusiasm for the time being. But it will be up on the blog soon!
Labels: chaos, citadel, demon, monster, monster mayhem, oldhammer, painting challenge, slaanesh