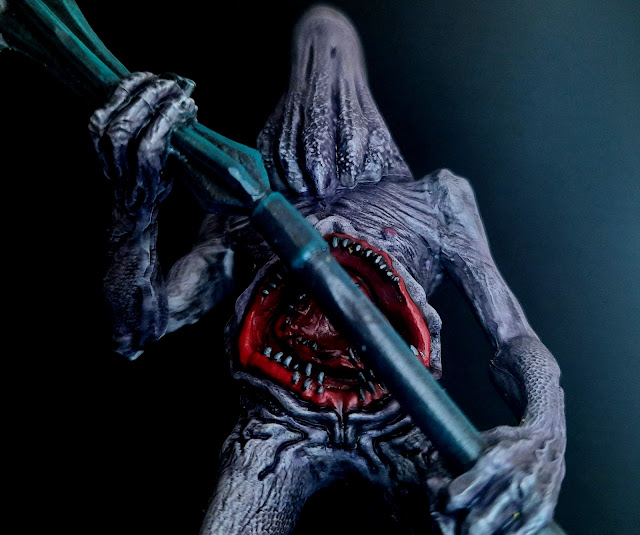 Holy crap, that's one of the best mini photos I've ever taken. Watch me forget to do it next time.

Tomb Tappers, according to the Forgotten Realms wiki, "received their name from their habit of burrowing into the depths to plunder tombs, temples, and caves in search of magic items, which they carried off". They're magical creatures that are around 15 feet tall, have a pretty horrible fanged maw in their stomachs, and wield a whopping hammer with which to destroy their enemies.

I picked up this figure last week at Gamer's Grotto while buying another pot of Nuln Oil after knocking over and spilling 90% of the pot I bought a few months ago. It's by Nolzur's Marvelous Miniatures and for its size it was reasonably priced at $15, which proves once again that Alicia giving me her ATM card and staying in the car is not the best of plans. 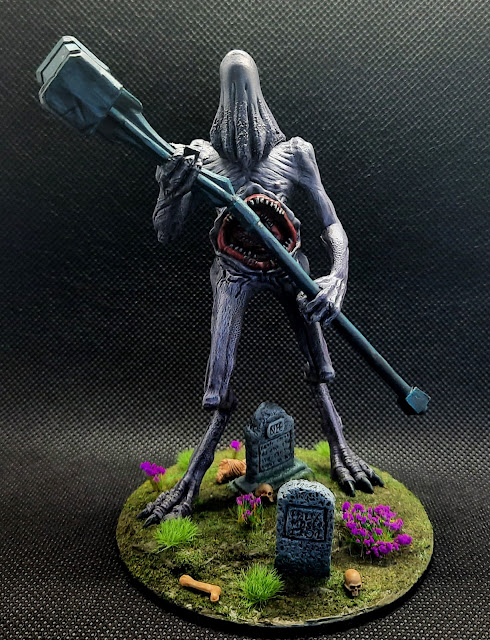 Although the mini is pre-primed, that didn't stop me spraying it with black primer mainly because at the time I didn't know it was pre-primed. I really have to start reading instructions. Anyway, after debating several base colours I went with Cold Flesh, which is a kind of warm grey with a purple tint. The Tapper got three thin coats before I was happy with the look.

At first I thought it was wearing a hood, but it turns out that it's actually his head. At least that saved me from having to come up with a secondary colour, so yay! 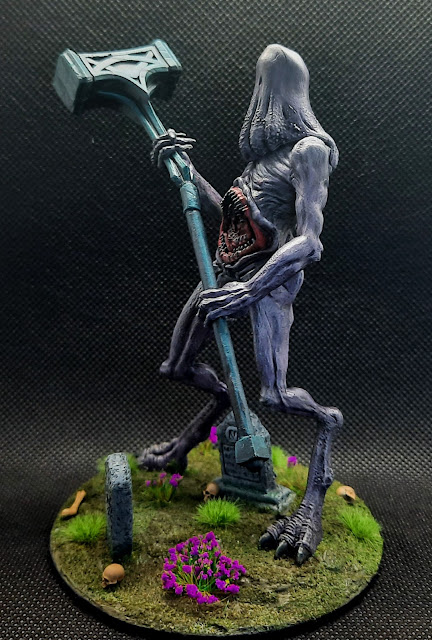 With the skin tone done, I had another internal argument about how to shade him. I ended up going for purple, using very thinned Druchii Violet as a glaze and deepening it with pure Druchii Violet to bring out the shadows and to darken his hands and feet a bit.

While all the wash dried I painted his claws Black and highlighted them with Neutral Grey and Ghost Grey. 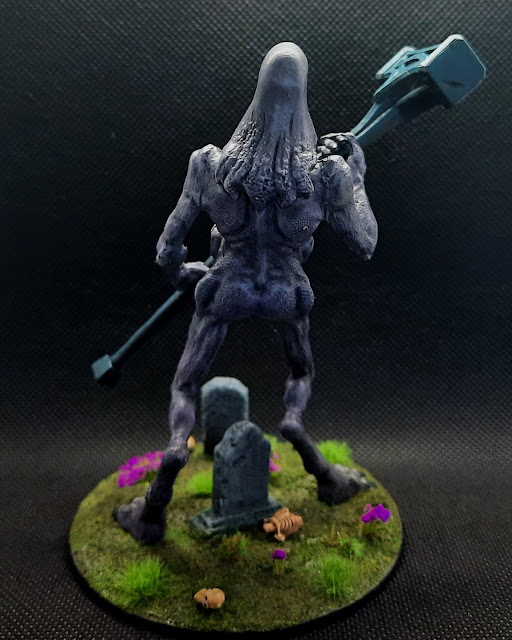 Next up was that hideous mouth. It got a base coat of Khorne Red and then some Biel-Tan Green to shade it, and I layered on Mephiston Red and Vermillion before coating the whole bit with Nuln Oil to tone down the reds. I wanted to keep the mouth suitably dark and disgusting, and to help with that I painted the teeth Black and highlighted them with Ghost Grey as doing them Off-White or Ivory would have made them stick out like a bacon sandwich in a mosque.

Once the Druchii Violet dried I gave him a very gently drybrushing of Ghost Grey using a makeup brush. 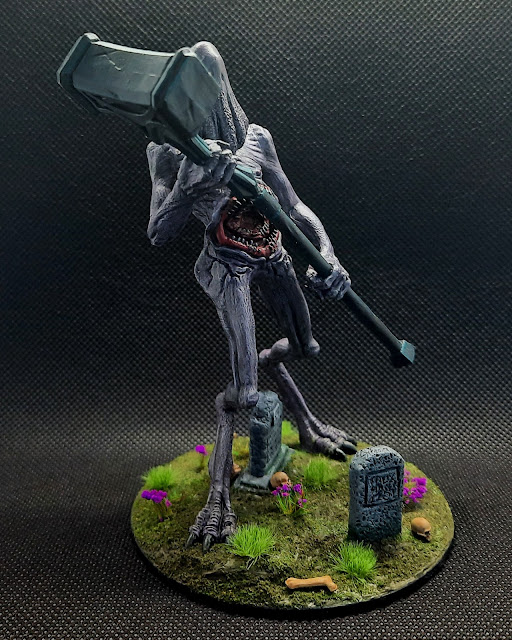 The final part to be done was his massive hammer. I touched up the black where needed and cracked open my new pot of Incubi Darkness, brushing it on in layers over the flatter surfaces and using more to edge highlight the head and shaft. I added some Emerald Green to bring out the edges even more, and the overall look ended up like greenish oxidization, which I'm happy with. 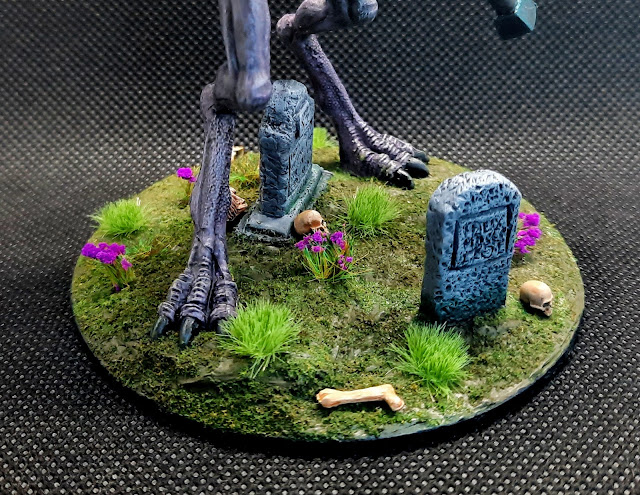 The Tapper comes with a 75mm base but it disappeared, so I used a 3" wooden disc much like I did for my Fungal Queen and glued him to it before I primed him.

It was covered with modelling paste and to keep with the "tomb" theme I stuck a couple of resin gravestones by Debris of War into the wet paste. The base was then painted with English Ivy craft paint mixed with PVA glue. I sprinkled over a ton of flock, put it on the windowsill to dry and left it overnight.

The flock was sealed with a matte varnish/water mix and I dabbed on some Burnt Umber wash to tone down the green a bit. The gravestones were painted Dark Grey and drybrushed with Neutral and Ash greys.

Finally, I added some Citadel skulls, a few bones by Reaper and the inevitable tufts and purple flowers. After painting the base rim black, he was done. 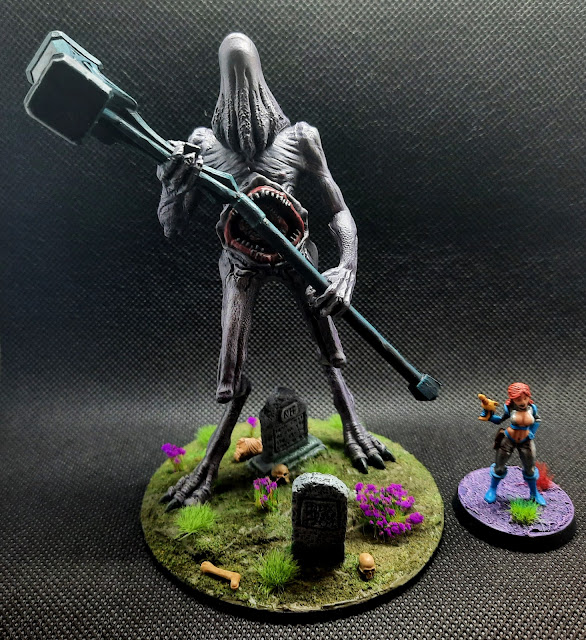 Here's Betty next to the Tapper for scale. After the Queen of Hell he's the biggest mini I've painted, measuring almost 5" tall. I'm not sure what kind of plastic Nolzur's uses but his legs are a bit bendy, and he definitely has a backward lean to him. Still, he's a terrifying figure and was fun to paint.

You've got red on you 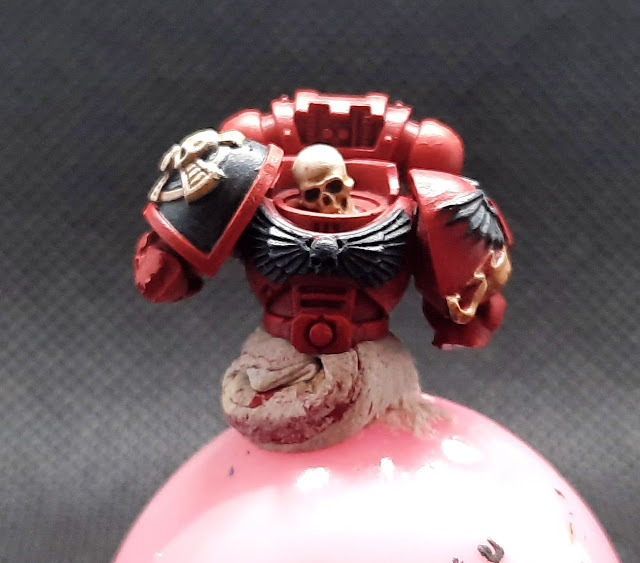 While painting the Tomb Tapper I also got this dead Blood Angel built and painted. I only picked the Italian space vampires because I found a Blood Angels shoulder pad in my bits box, and after painting him with Khorne and Mephiston reds and highlighting him with Vermilion I think he looks OK. If he appears to be familiar, it's because I shamelessly ripped off the idea from Dave's superb Fulgrim model and base.

He'll be going a feature on the base for my major Monster May(hem) project which I've been doing in bits and bobs, but I really have to put my foot down to get it done on time. As it requires converting one old large metal Citadel model with bits from another old large metal Citadel model, as well as copious amounts of greenstuff, superglue, coffee, music and swearing, let alone painting and basing, it'll probably appear on the blog at 11.59pm on May 31.

Till next time, beloved reader(s)!