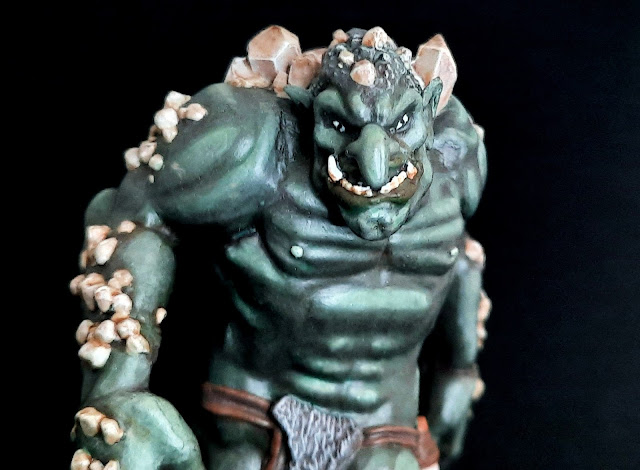 Rocky's been painted and ready to be posted for about a week, but I had to wait for a bag of 60mm bases to show up in the mail. He won't fit on the one 40mm base I could find, the 80mm wooden discs are way too big and he just about squeezed onto the oval ones, so it was off to Amazon to put in an order. Happily the new bases showed up on Saturday so it was a case of gluing him down and getting out the PVA, stones and flock to finish him off. 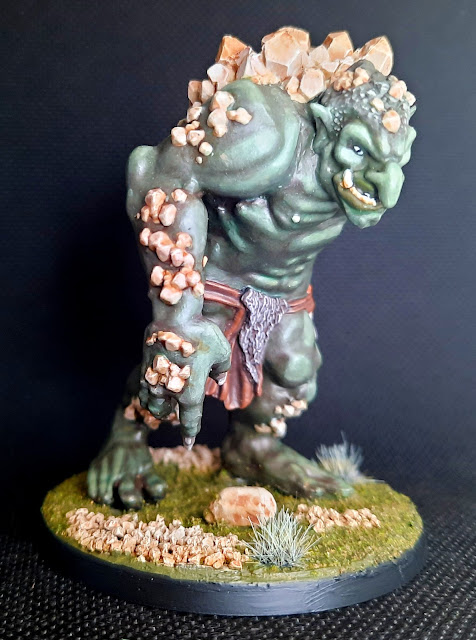 Going back to painting, Rocky's right foot was stuck to a 32mm base with a couple of drops of superglue to give me something to hold. He was sprayed with black primer and his skin basecoated with a couple of thin coats of Castellan Green. Yes, I've bought more Citadel paints as I wanted a much duller green shade and none of my Vallejo paints were suitable. Once the basecoat dried I gave him a thorough shading with Burnt Umber Wash as Biel-Tan Green is too intense and I was worried he'd end up looking like the Hulk. 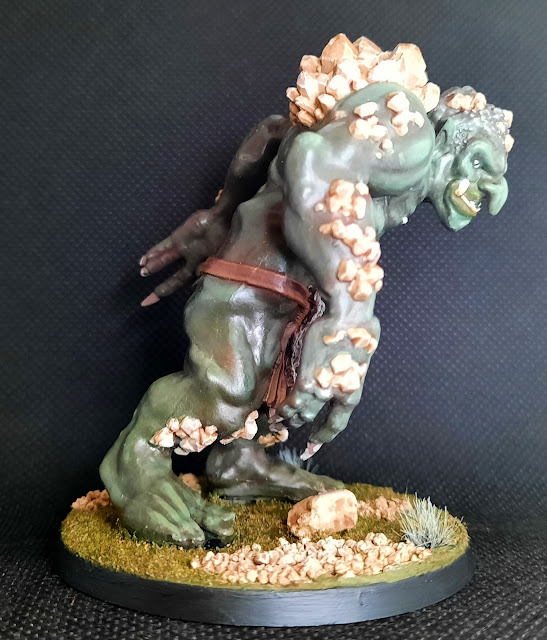 Once all the wash had dried I layered on some Loren Forest for the first highlights, which brought out his musculature nicely. After that he got a couple of layers of Olive Grey, and finally some Army Painter Scaly Hide, which is one of about four AP paints I kept from the set I bought back in 2018. The Scaly Hide was way too light, so I went over it with more Burnt Umber Wash to tone it down a bit. The stones on Rocky's back are shaped like crystals, but as I suck at painting crystals I decided to go for a traditional stone look with Stone Grey first, followed by Seraphim Sepia to shade it. More Stone Grey provided the basic highlights, and I used Silver Grey for the brightest bits, drybrushing it on before doing some edge highlighting. The stones on his arms and legs were painted the same way, and with all his body done I finished the relatively easy details. Rocky's belt and loincloth are Mahogany Brown, Burnt Umber Wash and Flat Earth, and the water bottle is Forest Flesh and Ivory. His fingernails are painted Black Grey and highlighted with some Neutral Grey. Once I'd painted his eyes, he was done. 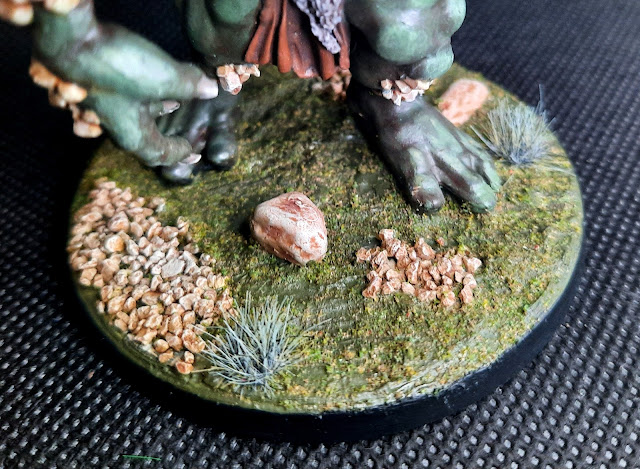 His base was done much like the Tomb Tapper's: a good dollop of modelling paste to give some texture, coloured with Marsh Green craft paint. The stones are from a bag I bought at a Michael's sale a few years ago, and they were glued down with plenty of PVA and painted the same way as the stones sprouting from Rocky.

The rest of the base was slathered with thinned PVA, but first I mixed up some different colours of flock as I was tired of just using basic green. I dumped two teaspoons of Green Blend into a tupperware box, added two teaspoons of Earth, one of Earth Blend and one of Burnt Grass, put the lid on and shook the shit out of it to mix it up. It was then shoveled onto the wet glue and left overnight, and this morning I added a couple of tufts and daubed thinned matte varnish over the flock to seal it. 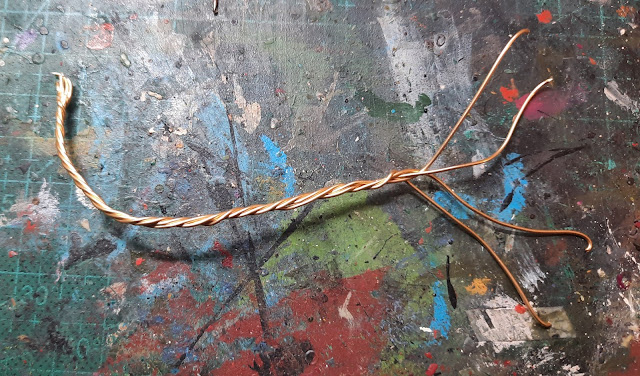 My main Monster May(hem) project is coming along, albeit still too slowly. Above is my attempt at making a tentacle from brass wire, which is either going to be covered in greenstuff or just spray-painted depending on how arsed I can be to mix putty.

The only thing holding me back at the moment is the humidity, which is not the best weather for spray painting. But I've got a clear idea of how to go about the conversion and I've even scribbled down ideas and colour schemes so I don't inevitably forget them. Hopefully I'll have a progress post up soon.

It's gone wonderfully green here in our little corner of Vermont. It's amazing to think that four weeks ago today we had snow and ice and were basically freezing thanks to me forgetting to order heating oil, a mistake I won't be making next winter. But now it's 80 degrees and sunny, and apparently we're in for a severe thunderstorm tonight. Excellent.