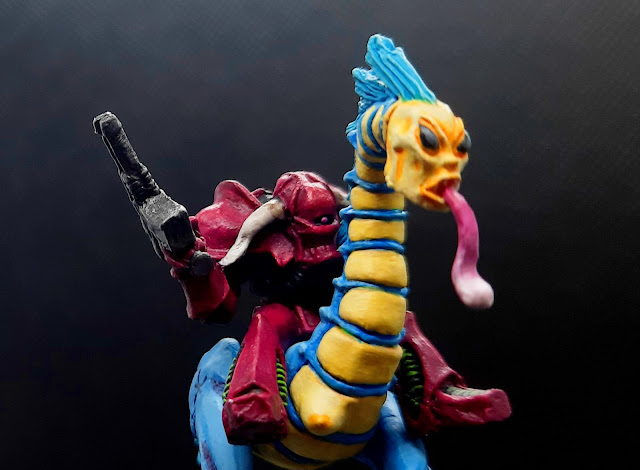 Another Monster May(hem) post, another chance to get an older mini out of the Magical Box of Unloved Lead and painted up. Yay!

I bought this guy as part of a mass Ebay order back in May 2020 when I had the idea for painting a fantasy Slaanesh warband (shockingly it isn't finished yet). He wasn't supposed to be part of the warband; I just had to buy him when I saw him. Since then he's been safe in his blister pack in a box while I got on with the Champion, Warriors, Sorcerer, Thugs and Daemonettes. Two years and 11 days after he arrived in the mail he's finally ready to take his place on the display case. Or shelf, as I've run out of space in the case. 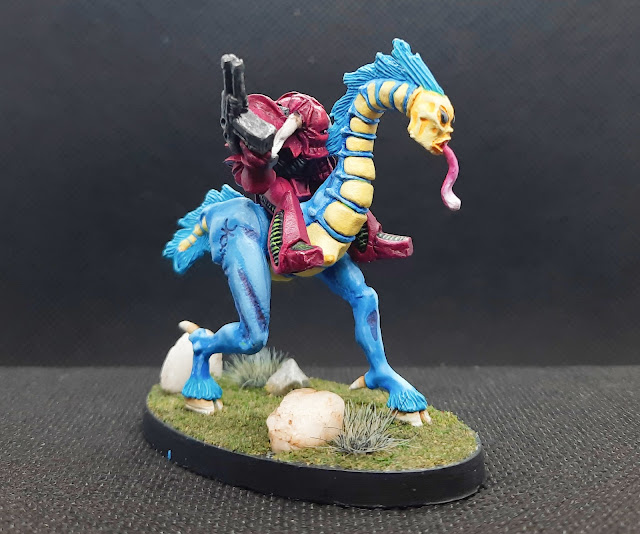 The riding beast comes in bits: a body, two legs and a head, so I had to glue it together and make sure the legs were positioned so it would stand up properly. Happily that wasn't too difficult to accomplish, and then both the beast and rider were stuck to temporary bases and primed with white spray paint.

I started with the beast on the grounds it would take longer, giving it a basecoat of Magic Blue and then a topcoat of Electric Blue. The highlights were easy enough, Deep Sky and Sky blues complementing each other so I didn't have to mix my own shades. As you can tell there's not much of the Magic Blue left; this is because I thought it was too dark for a Slaanesh model. 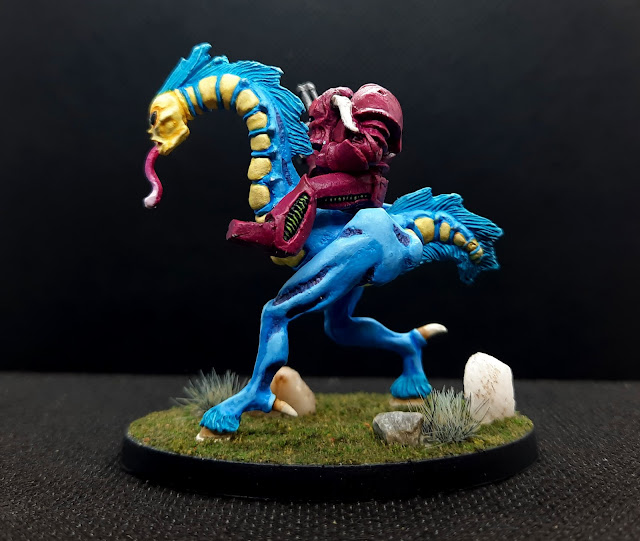 With the blue finished I started on the yellow with a basecoat of Averland Sunset, which has been a gift from the Dark Gods as it means I'm no longer scared of painting yellow. Two thin coats did the job, and it was highlighted with thin layers of Moon Dust as it's a good pastel shade which works well for Slaanesh minis. I used some Casandora Yellow on the face to shade around the mouth, nose and eyes to bring out the details more, and then mixed a bit of white into the Moon Dust for the raised bits.

I painted its eyes Black and dabbed on some thinned Neutral Grey to give them a shiny look, and then gave its tongue layers of Warlord Purple, Sunset Red, Pink and White. 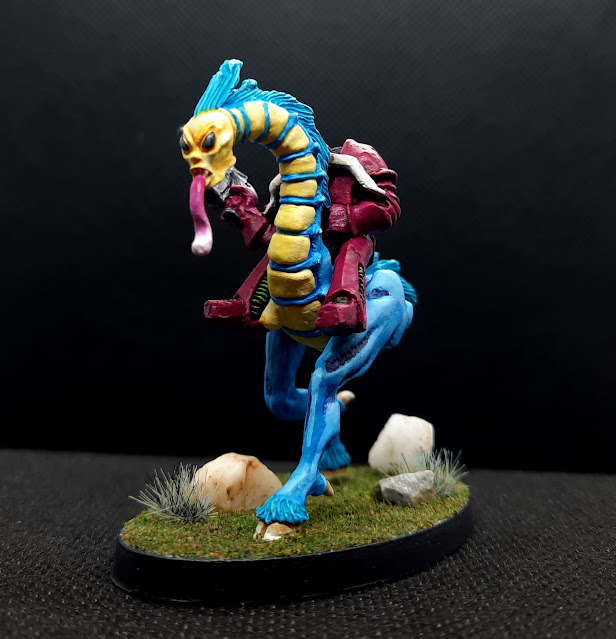 Its mane and hair were given a coat of Blue-Green and highlighted with a mix of Light Turquoise and White, and the hooves and horns were painted with Bone Shadow, Bonewhite and Ivory. To finish it off, I used some Red Tone to shade areas and fill in the Slaanesh rune brand. 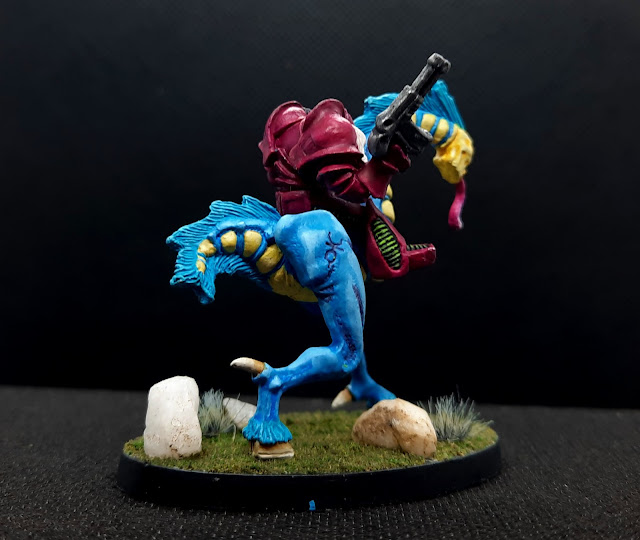 And now it's time for the rider, and this was not as good an experience. I didn't want another pink or green or blue scheme, so I went for Red Violet. Despite having good results with it on one of my Chaos Warriors, it was a pain to apply and took four coats until I was happy with it. Not only that but it began to rub off very easily, so he got two coats of matte varnish before I continued.

I highlighted him with Sunset Red and a touch of Pink, and used Black to paint the inserts in his leg. The lines aren't too well moulded, so I had a hell of a time going over them with Scorpy Green and had to do my best to tidy it up with more Black. His pistol is just Iron Warriors, Nuln Oil and a bit of Plate Metal.

Before gluing him to the steed I did the base, using the usual PVA, flock, and some stones from the backyard. I don't know where that spot of Electric Blue on the rim came from as it was a foot away in the paint rack when I did the base. I blame the gremlin.

Now all I had to do was glue him to the steed... and I could not work out how he was supposed to sit on it without his face being jammed into the mane and blocking his view. I daubed some superglue to his bum and the back of the beast and held him in place slightly to the side so he could see where he was going. It worked really well, at least right up until he fell off after I took these pics. Such is my life.

It's coming along... the base is almost done so at least that's one good thing LOL! It's currently in bits and is probably 90% painted, just leaving the fun and games of gluing it all together and hoping it works to come. Today we're off to Massachusetts and tomorrow we're going to a craft/food fair in Bennington, but I'm still hoping to have it finished before Monster May(hem) 2022 comes to an end.

Till next time, take care, stay safe and watch out for gremlins!