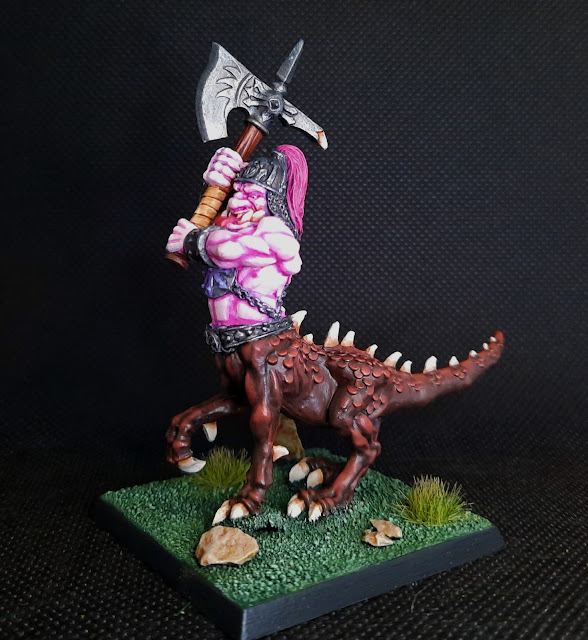 Although I was never into Warhammer Fantasy Battle back in the day, I always liked seeing the figures in 'Eavy Metal and the dragon ogre was one that stood out as being pretty cool. So when I spotted one for sale on Ebay in October 2020 — or as I like to think of it, "that time when I had money" — I snapped it up. I think it's either a second or third edition model. I did see a classic first-edition one but it was priced at over $100, so yeah but no. 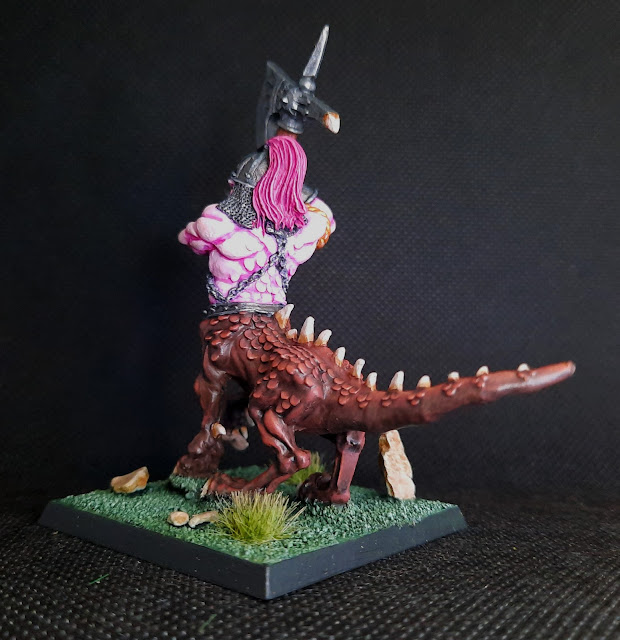 After sticking his ogre half to his dragon half and filling the inevitable gaps with greenstuff, I glued him to his base, then covered it with sand and a couple of stones. The whole thing was sprayed with black primer when the hot humid weather gave way to pouring rain, and left to dry in the garage.

I kicked off with his bottom half. Being Welsh I thought about red for the dragon part but I'm a bit done with that colour for now, and after painting Rocky I didn't fancy green either. I decided on brown, with two thin coats of Chocolate Brown covering the black primer nicely.

Once dry it was given a thorough coat of Agrax Earthshade which deepened the brown and made it much richer. I cracked out the Mahogany Brown and started to layer it on over the raised bits, and then switched to Cavalry Brown to up the red a bit more. The final highlights were done with a light dry-brushing of Orange Brown and Light Brown.

It didn't take too long to do and I'm well happy with how the brown looks. 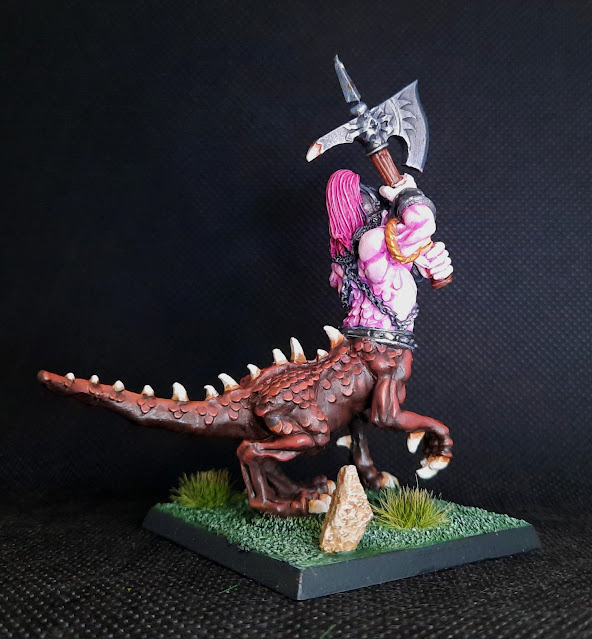 I'd decided to paint his hands and axe separately and glue them on at the end, so I did those next. The axe blade got a basecoat of Neutral Grey and the wooden bits Flat Earth. I wanted something a bit lighter for the handle and used Ivory shaded with Sepia Seraphim.

The next day I started on his top half. Obviously I was going to paint him in Slaanesh colours, so pink was the obvious choice and two coats got the primer covered up. I made a 50/50 mix of Pink and Mummy Robes (a very pale pink) and layered that over his muscles and face, then added more Mummy Robes to lighten it more and went over the high points again.

To shade between his muscles and tidy up any errors I thinned Warlord Purple, which is a hot pink, and used it as a wash, painting it gently into the recesses.

Next up were his claws and spines. As I've got a lot more confident painting bones recently these weren't really an issue. I used Reaper Bone Shadow as a base for all of them, then layered on Bonewhite and shaded it with Seraphim Sepia. I highlighted them with more Bonewhite and some Ivory. 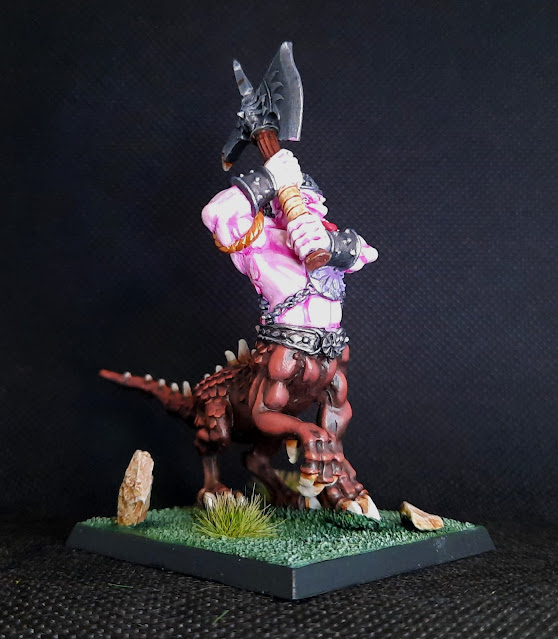 And, finally, the details. Yay. All the metal bits were painted Neutral Grey with a topcoat of Iron Warriors, which I bought last week as I fancied a new metallic shade. They were highlighted with Silver and then washed with Nuln Oil to tone down the shininess a bit.

His plume got a coat of Warlord Purple and was drybrushed with Emperor's Children, and his teeth were done the same way as his claws. I painted the Chaos star on his breastplate Purple, then layered on a bit of Blue Violet to make it a bit more interesting. To finish off his body I painted his tongue Khorne and Flat reds and ended with his eyes.

Back to his arms. The hands were done the same way as his body, and I washed the axe handle with Agrax Earthshade and highlighted it with more Flat Brown. The blade was painted to match the other metallic areas, and the back end has a bit that I painted to look like a fang.

And now to glue them on. With this being an old, metal Citadel model of course the hands don't line up perfectly with the wrists, so I dabbed on some drops of superglue, slipped the arms into the gap and held them there for a minute. Happily it stayed in place and looks good.

Basing time! The whole base was painted with Castellan Green and then drybrushed with Loren Forest. I then washed the whole thing with homemade yellow wash (it's not as orange as Casandora Yellow) and drybrushed it again with Scaly Hide. The stones were painted Stone Grey, shaded with Seraphim Sepia and drybrushed with Sliver Grey. I glued on a couple of tufts and he was finished.

I have to say, I'm very pleased with this one, and hopefully I did a classic sculpt some justice. Till next time!