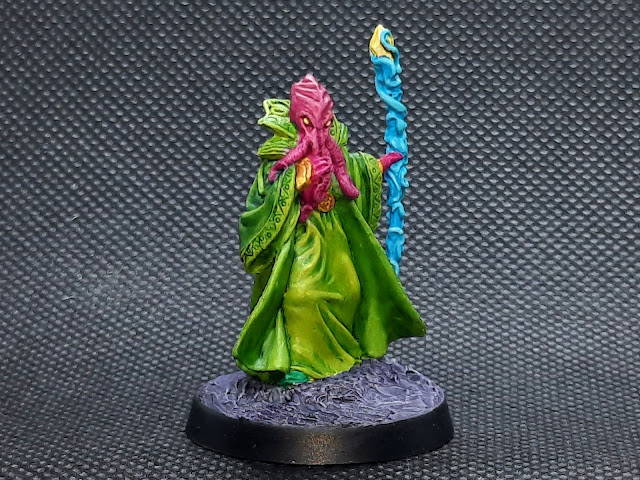 You seem malnourished. Are you suffering from internal parasites?
I knocked this Bathalian out in between working on a bigger project. Like a few of my most recent minis, I've owned him for a good few years — I think over three — and it's about time I finally got some paint on him. When I found him his cloak was painted violet, so I'd obviously started him at some point in the deep distant past.

I named him Zoidberg for obvious reasons. After googling around, it appears that a Bathalian is Reaper's non-union Mexican equivalent of D&D Illithids, or mind flayers. I'm almost 99% sure that I got him to qualify for free shipping on Amazon.

I didn't like the violet, so I overpainted it with Heavy Black Green and then gave that two coats of thinned Olive Green. I did his robe, cuffs and collar in Golden Olive, and then washed all the greens with Biel-Tan. To highlight the clothes I just added Yellow Green to the paints and layered it on, but I don't think the layering worked too well.

I attempted to pick out the pattern on Zoidberg's cuffs and collar with more Biel-Tan, and it sort of went OK. His single visible shoe is Park Flat Green. 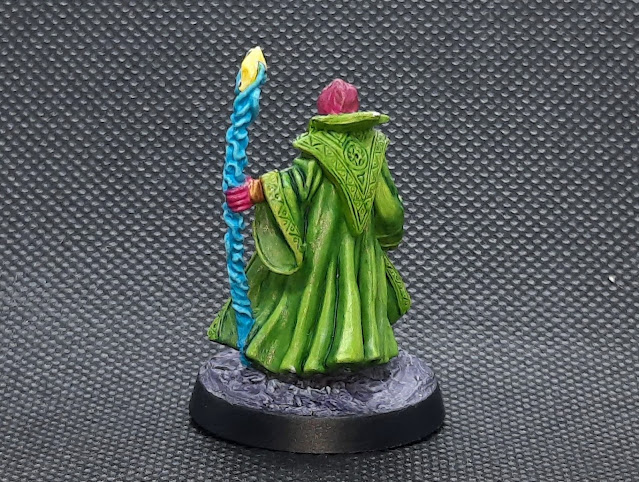 After finishing his clothes I hit his skin with Warlord Purple, his staff with Light Turquoise and his cuffs with Averland Sunset. After highlighting his face and hands with Pink, I washed them over with Carroburg Crimson to calm them down a bit. The staff was highlighted with Blue-Green mixed with White, and the cuffs painted Polished Gold and shaded with Seraphim Sepia.

The final two bits were his eyes, painted Moon Stone, and the crystal on the top of his staff. I just gave it a coat of White and then two coats of Lamenters Yellow layer paint.

Zoidberg's base is a testament to my laziness: it's just modelling paste built up to the level of his integral base, painted Mechanicus Standard Grey and highlighted with Ghost Grey. I jazzed it up a bit with a wash of Druchii Violet.

For a throwaway mini Zoidberg turned out pretty well, especially as the green was a bit of a bugger. The photos were taken using the lightbox, this time with the black backdrop and with my phone instead of my DSLR. I think they came out OK.