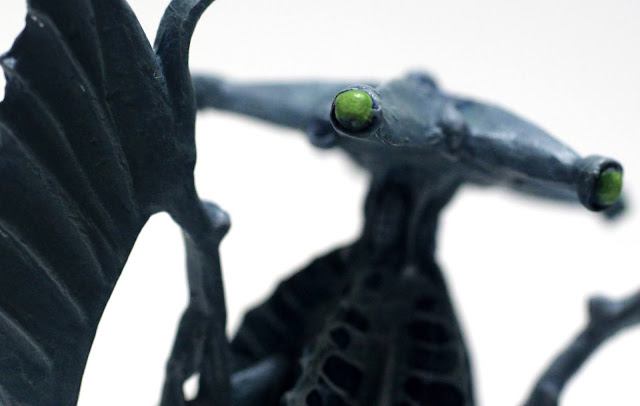 Before we kick off, I just want to say that I've been looking forward to this year's Monster May(hem) for ages. I had an absolute blast last year, painting five figures over the course of the month. I chose to begin this year's challenge with an Elder Thing by RAFM. I've named him Giles.

Elder Things are creatures created by HP Lovecraft, first appearing in his excellent novella At the Mountains of Madness. Set in Antarctica, it tells the story of an expedition that falls foul of strange frozen beings they find buried in the ice. It's easily one of my fave HPL stories, especially as I'm a huge fan of John Carpenter's The Thing, another masterpiece of horror set in the frozen wastes.

Six feet end to end, three and five-tenths feet central diameter, tapering to one foot at each end. Like a barrel with five bulging ridges in place of staves. Lateral breakages, as of thinnish stalks, are at equator in middle of these ridges. In furrows between ridges are curious growths—combs or wings that fold up and spread out like fans ... which gives almost seven-foot wing spread.

They're various shades of grey with reddish, yellowish and greenish bits (all of Lovecraft's monsters have "-ish" colours).  I didn't fancy this scheme and I wanted a cold palette to suit its snowy setting. I ran my eye over the paint rack and picked out three colours that should work well together on Giles. 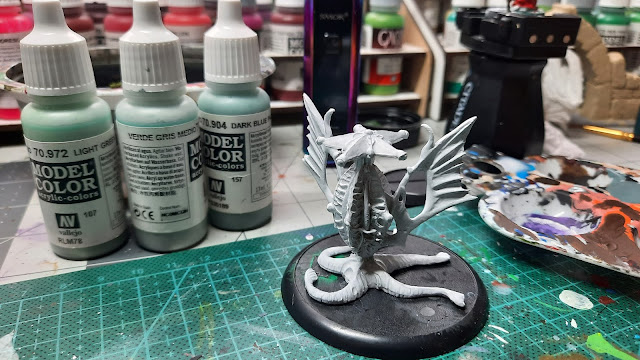 Here's Giles, assembled and primed with white spray paint. I had to glue him to a 60mm base to hold him in place. The colours I chose were Dark Blue Pale (on the right, and as you can see it's not exactly dark), Light Sea Grey and Light Green Blue. I started off by painting him Dark Blue Pale all over, and then washing his torso with Blue Tone. 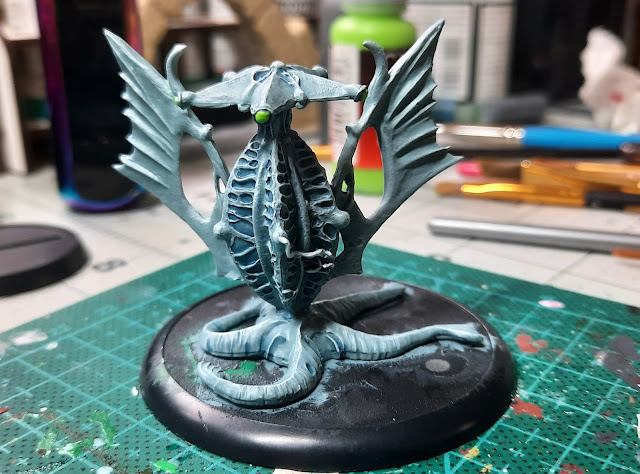 Once that was dry it was on to the thrill of drybrushing Giles with Light Green Blue, followed with Light Sea Grey, and then adding a bit of Off-White for the final highlights. The veins/tubes on his torso and head were painted Off-White to make them show better, and then I gave his eyes a touch of Scorpy Green.

Giles certainly has a classic Lovecraft "-ish" look, in this case greenish-grey. He was so straightforward to paint that he was done in 45 minutes. I know, I'm shocked too. I did last year's first entry, Tracy, over six days(!). 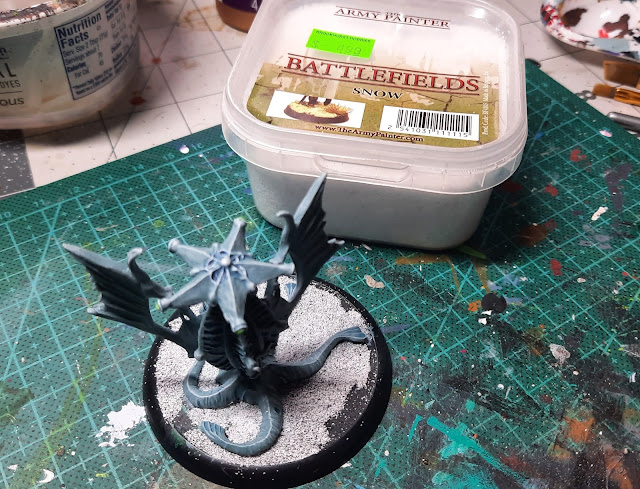 On to the base. Snow was the only way to go, so I dug out my tub of Army Painter snow flock. I have to admit, I don't really like using it, to the point where I've owned it for almost three years and only used it on a few bases. I had to get it around, but not on, Giles' tentacle legs, so I started off by brushing thinned PVA glue around the legs and then out into the main part of the base and sprinkling on the snow. I should have started by painting the base white or very light blue, but this is me we're talking about. 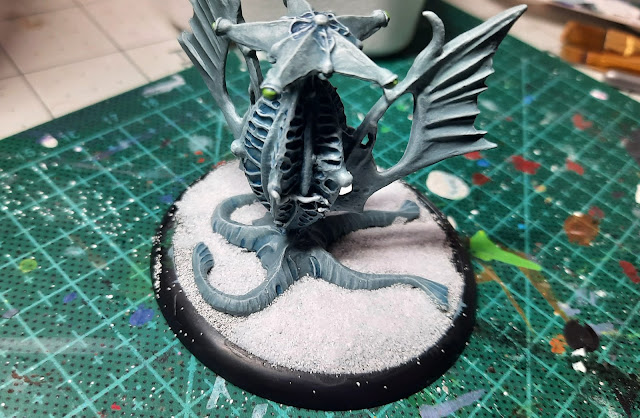 With the base layer of snow done, I left it to dry for an hour and then added more by daubing on matte varnish a bit at a time, dumping on flock and then tipping the excess back into the tub. Most of the snow base tutorials I've read have the snow in places with bare ground showing, but as this is central Antarctica there's not a lot of bare ground. This base is going to be very white. 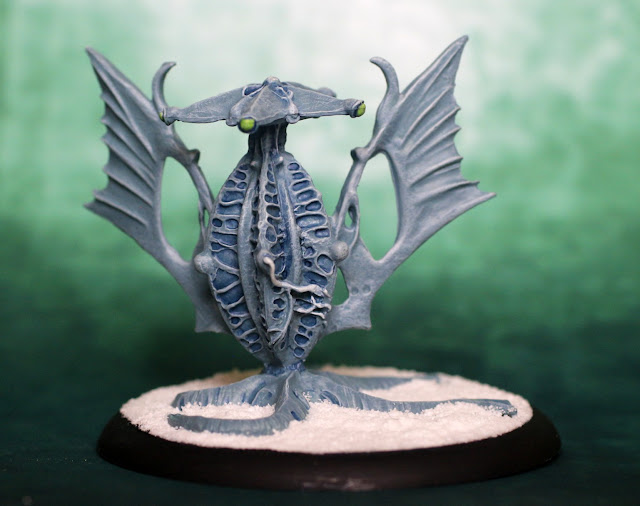 More varnish, more snow, more varnish, and then I hit a point where I was happy with how the base looked, or at least as happy as I was going to get. After a final coat of varnish to blend in any errant bits of flock and painting the base rim black, Giles was ready to join the ranks of my other Lovecraftian horrors. 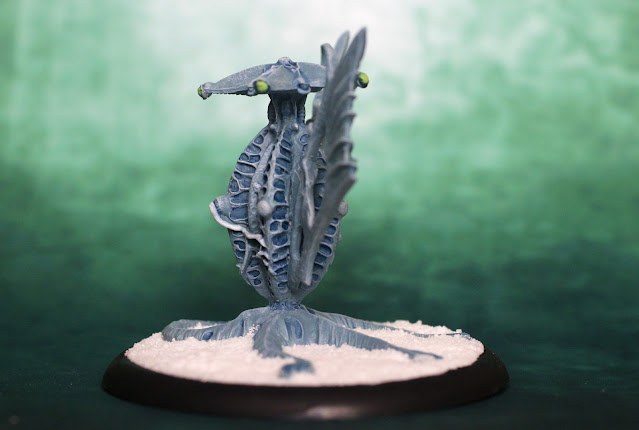 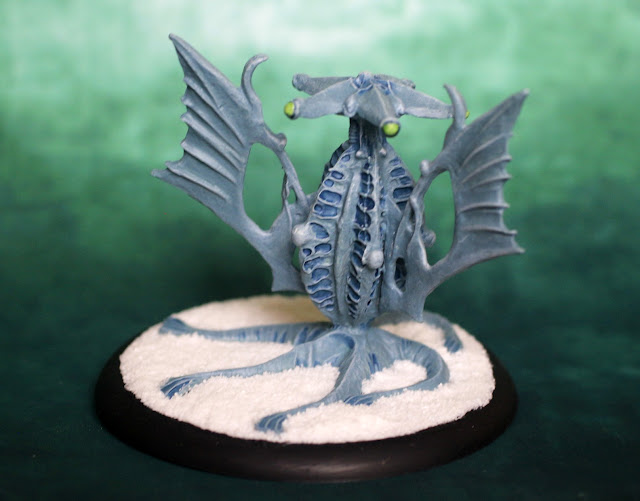 There are a few Elder Thing minis available, but RAFM's is my favourite. So, that's my first Monster May(hem) figure done and there are more to come!
Note: I reshot Giles and replaced the last three images with new photos after printing out a new background.
Labels: alien, basing, horror, lovecraft, monster mayhem, painting challenge, RAFM, snow