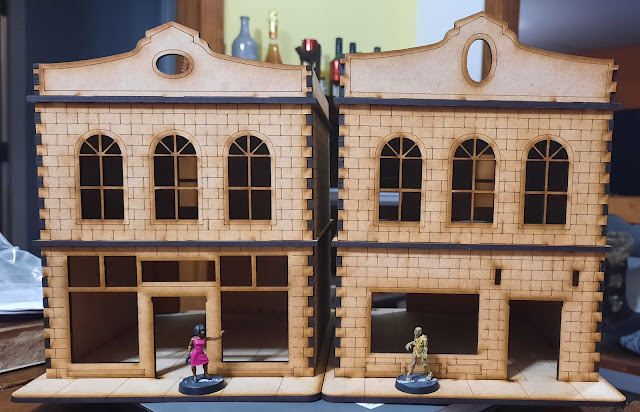 Yesterday I turned 50, so after waking up and commiserating with myself I got on with the standard birthday stuff: doing the dishes. Yay. Then I finally got to open my pressies from Alicia, and I was a happy bunny.

These awesome buildings are again by Atomic Laser Cut Designs, from their Mean Streets range of MDF scenery. The left one is Brownstone 1A and the other is Store Front 3.

As usual they were easy to dry-fit together on the kitchen table after I'd worked out which walls went where (they don't come with instructions). Both will be painted to have a business on the bottom floor and flats above, much like you see on any average British or American small-town high street. I think I know what those businesses will be, but I might change my mind as I go along.

The're pretty much identical, so here's a look at one of them. 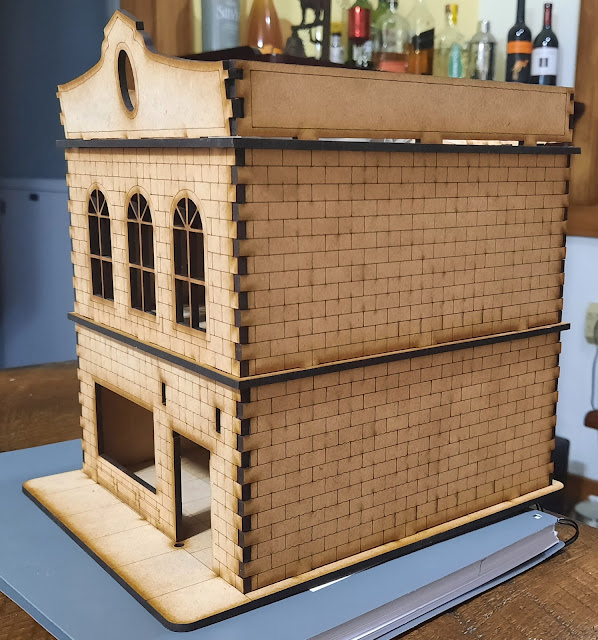 Some of the pegs need to be trimmed to fit better, as you can see from the roof bit above, but this is a pretty minor thing given all the other parts fit together really well. The window frames are very well made and match the gaps in the walls perfectly. They'll be painted separately from the building and glued on later. 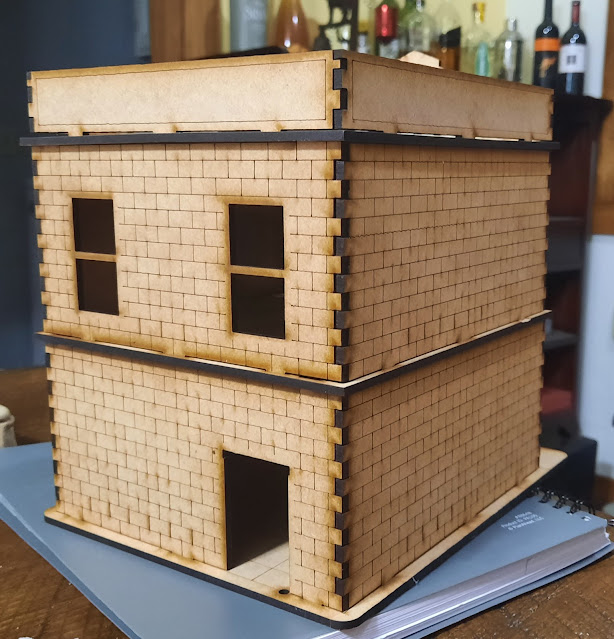 Although I like the idea of a brick building, the mortar lines aren't etched in too deep and would be a bugger to paint. And the fact that bricks are rarely a uniform colour and I'd need to paint random ones in different shades really doesn't appeal. I recently bought two pots of terracotta craft paint, so hopefully that'll be enough to do both buildings. I would use spray paint but there's a blizzard forecast for later today and it's already been snowing for hours, so a trip to Walmart is out.

I'm undecided on whether to basecoat them with the texture spray again; I think I'll have to otherwise there'll be nothing to drybrush. If I do, I'll have to mask off the areas where the frames go otherwise I'll be in a world of hurt. 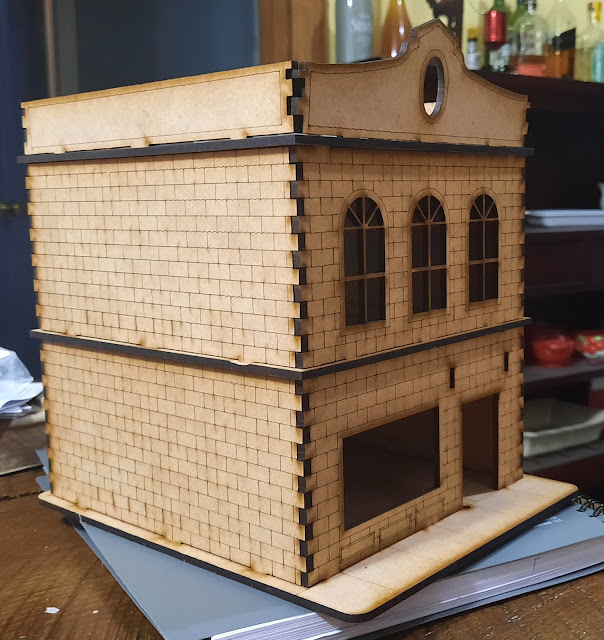 The holes above the door are for a canopy. It's MDF so I don't know how realistic it'll look, so right now I'm planning on leaving it off and covering the holes with a sign. The lower half of the frontages will be painted different colours from the top, sides and back.

As for accessories, I'm running out of the TTCombat vents I've used on my previous buildings. I've looked for more online, but unless I want to shell out for shipping from the UK or Germany I appear to be out of luck. I'm going to have to dig out my Oyumaru stuff and mould some more out of Milliput.

As for covering the gaps at the corners, I don't want to use coffee stirrer sticks again. I have an idea as to how to do it, and if it doesn't work I'll use filler. Apart from that, I can't wait to get started on them.

On Thursday I found my last Reaper dumpster and finally finished it off. I'd already sprayed it with the rust-brown primer and put Liquid Mask on it at some point last year, so it was just a case of giving it a top colour and scraping off the paint. I used a spray paint called Paprika, which is a nice warm red-orange shade, but it didn't cover the primer too well (which is what also went wrong with my yellow shipping container). Still, it looks grotty enough.

Once the paint was peeled off, I added some more graffiti by drawing it on with a pencil and going over the lines with paint. I'm well happy with the raccoon on the front, and all the designs came out better than I thought. The yellow one on the left was supposed to be a vertical tag but ended up going a bit Eldar, and I decided to keep it that way. My freehanding skills have really come along recently.

The buildings weren't the only gifts from Alicia. Almost unbelievably we have a British Scottish store about 10 minutes down the road from us, so I also received this bounty: 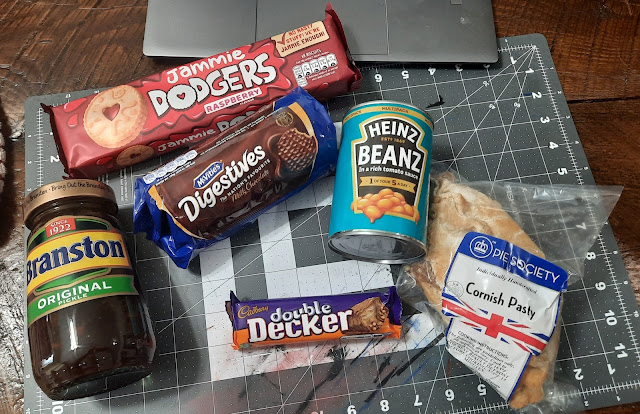