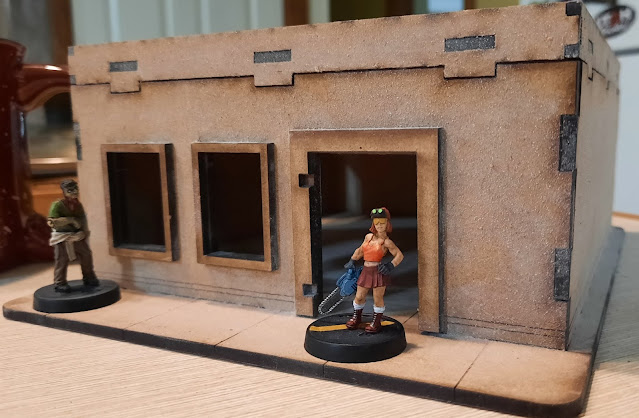 It's here again, the challenge at which I failed miserably last year. This year, however, I'm raring to go with an MDF building I bought back in December specifically for the 2021 Season of Scenery, along with a couple of smaller projects. And I might even complete one this time! 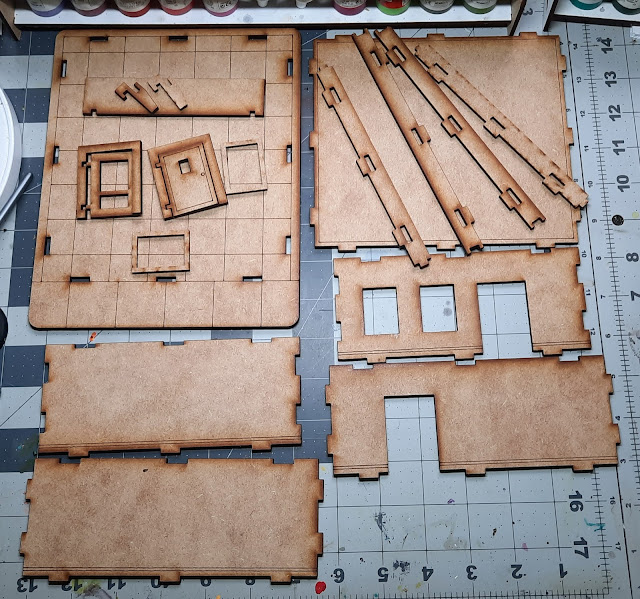 Here it is in its unassembled glory. It's made by Atomic Laser Cut Designs and was $15 on Amazon. On the top left is the base with the signage, window frames and doors, and below it are the back and one side. On the top right is the roof with the raised edges, for which I'm sure there's an architectural name that I don't know, and below are the front and other side.

Upon opening this eight months ago — seriously, EIGHT MONTHS? We'd only just moved in to our house! Where did it go? — it smelled really strongly of burnt wood, which I'm assuming is from the laser cutting process. There's still a hint of bonfire about it but nothing my olfactory senses can't deal with. 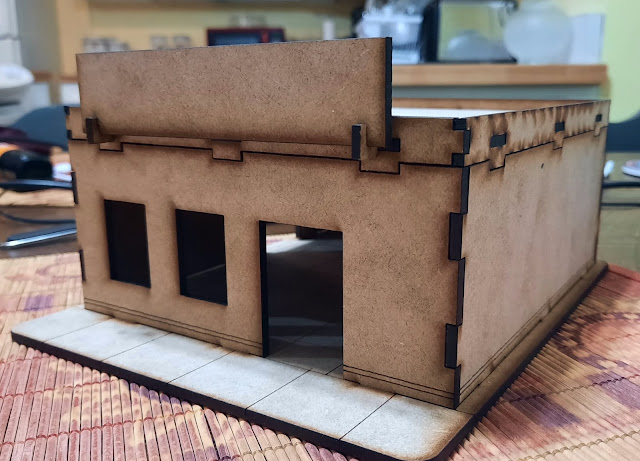 As it's laser-cut the bits fit together easily without having to force them into place, which is more than I can say for Vallejo's MDF paint stands. The roof goes together so tightly that I don't think it needs to be glued. Obviously the window frames and doors aren't stuck on yet and I don't know if I'm going to leave the sign up there or bin the struts and just glue it to the top of the front.

After dry-fitting it a couple of times I began to prepare it for painting. One of the issues with the building is that there's no texture to the MDF and no details like brickwork etched into the walls, so unless I want a store that looks like it was made from plastic I'm going to have to rough up the walls a bit. I was going to use filler, the same stuff I used on the skull rock I made in March, and to be honest I was worried as I could see me easily mucking it up. 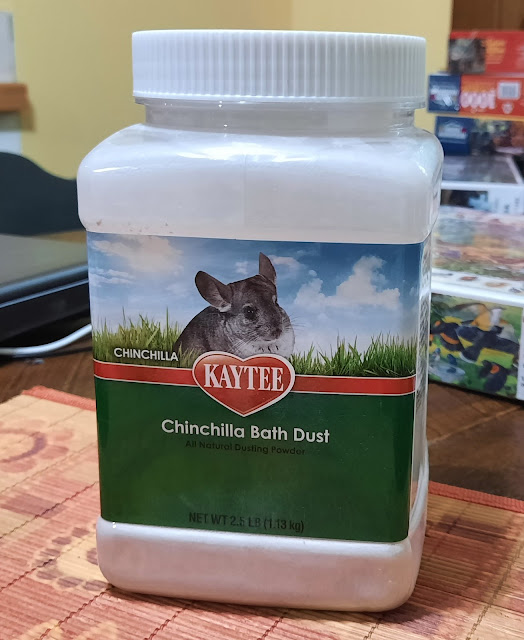 But then I remembered something. Back in April, Mark over at markamorin.com made a fantastic Aztec temple sacrificial altar from an MDF kit and provided detailed steps as to how he prepped, textured, and painted it, so I'm in debt to him for his unwitting help with this project. Chinchilla dust is not something I'd previously heard of, but after reading his post I ordered a jar from Amazon. It's been sitting under my desk for over a month, and at $8 for 2½ pounds, I'm not going to run out any time soon.

I've read so many tutorials on prepping MDF and still don't have a clue as to the best way about it. Some say to wipe it over with a slightly damp cloth before painting, some don't. Some say to not use PVA glue to avoid warping, some say it's fine. Some say don't use acrylics because they can also cause warping, others say to plaster it on and don't worry about it. Others claim you have to use special paints, while some tell you to just blast it with spray primer. I love the internet; one problem, 250 different answers. While Mark's post didn't mention any of that, he did have issues after dusting and painting the structure first and then assembling it. So with this in mind I put the dust to one side, glued the building together and left it to dry.

Before I glued the pieces together I measured them and made a note of the dimensions. Although $15 wasn't too bad a price, I can buy sheets of foamboard for a dollar so if this building works out I'll use the measurements to make my own. If anyone wants them, here they are: 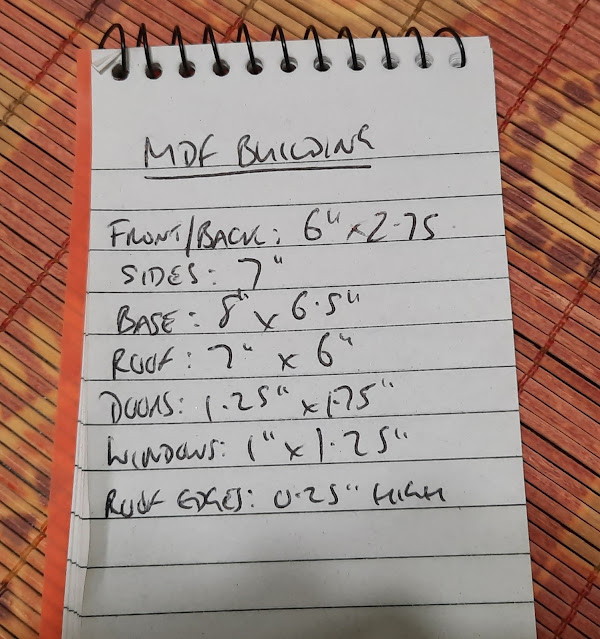 You're welcome. I apologise for the inches, but this is America and my set square doesn't do metric. 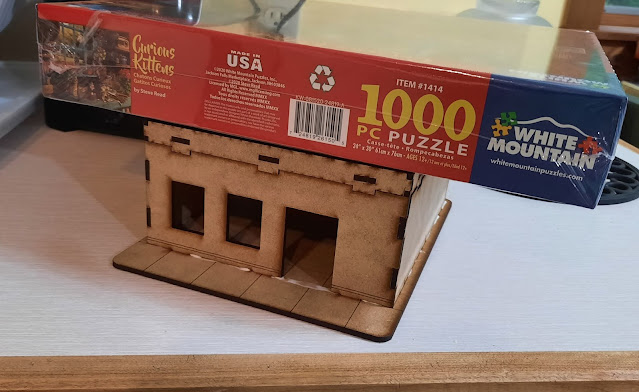 I stuck the walls together, then placed (but didn't glue) the roof to help hold them in place. After about 20 minutes I glued the whole thing into its base, then put one of Alicia's new jigsaw puzzles on top to hold everything together and left it on the kitchen counter. If it works I might start walking around with a jigsaw on my head to hold myself together. 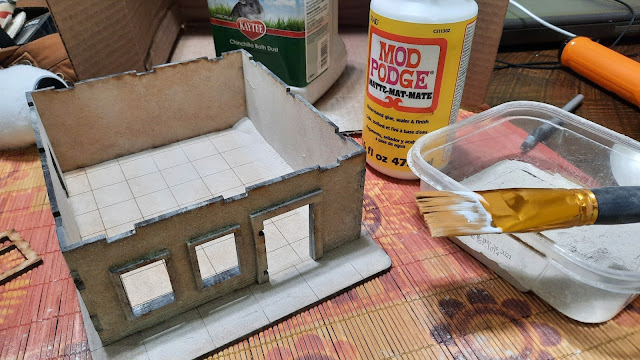 After doing the dishes and watching a random episode of The X-Files I figured it'd had enough time to dry and started the chinchilla dusting (which is something that sounds like it should be illegal). I hoped this would be pretty straightforward but just in case I did a test with a bit of foamboard. It worked, and gives just enough rough texture to be picked up by highlighting. Yay! I used a cheap makeup brush to apply Mod Podge, and then sprinkled the dust onto the glue. And yes I did do this on our custom-built kitchen table, so Alicia, if you read this, I was really, really careful. 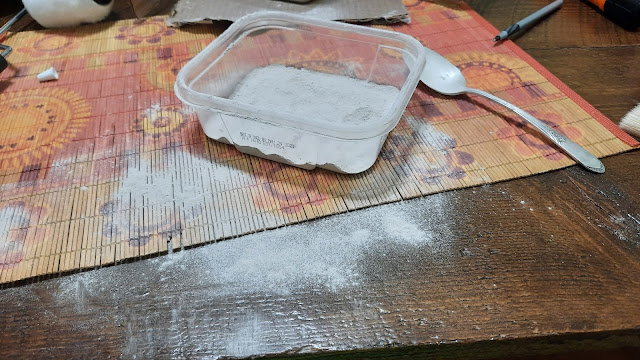 I have seven hours to clean this up before she gets home. After leaving the building for a good while to thoroughly dry, I took it outside and brushed off the extra dust. The dust didn't cover evenly, which is entirely on me, but the randomness looks fine. Then it was time for a trip downstairs to spray prime it. As is traditional, I had an internal debate about which colour to use. I could use white primer and then shade it with grey wash, or I could go with neutral grey primer and just drybrush the white on. I decided to go with white. 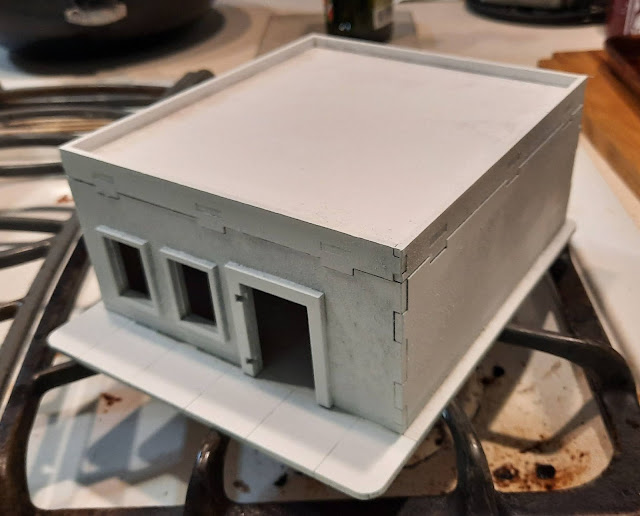 So this is where we are so far, and please ignore the state of our cooker. There are some gaps which I assume is down to warping from either the Mod Podge or spray paint, so I'll have to work out a way to deal with them. Maybe PVA? The roof isn't glued on yet as I need to do some stuff to the inside, and I have lots of ideas of where to go in terms of painting and detailing (although not necessarily how to do it).

Tomorrow I'll hit it with Grey Wash to get some shading on it, then it's a case of highlighting the white and adding some colours. One thing I do not want to happen is getting bogged down overthinking things to the point where I just don't make any progress, which is what happened with the cottage last year.