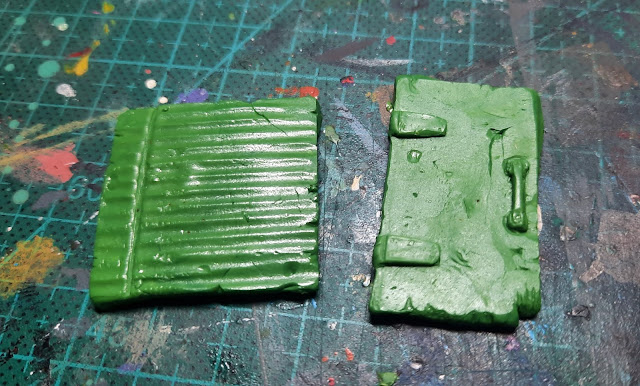 As part of the ongoing Season of Scenery challenge, I want to make some urban barricades. They're way more suited to post-apoc/zombie games and 40k than weird eggs or fences or ruined chapels or skull rocks... well, the fences will probably work. I enjoy making the sci-fi or fantasy scenery, but I need to concentrate on one genre till I've got enough.

I got the inspiration to finally use my Oyumaru stuff from Roger, who used it back in April to make some wagon wheels and a skull. That reminded me that I'd bought some Oyumaru in October last year and promptly forgot about. He went on to use it to make more skulls for his astonishingly superb sacrificial altar for this year's Season of Scenery challenge. 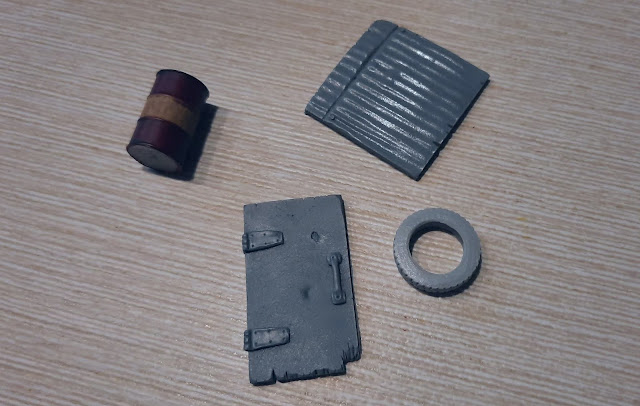 These are the bits I want to reproduce: a dumpster lid, a tyre, an old door and an oil drum. The drum is by Debris of War, the others by TTCombat. I have another 11 oil drums but postage from the UK to the US is horrendous, which is crap as Debris of War do some excellent resin scenery; it's where I got my ruined chapel. 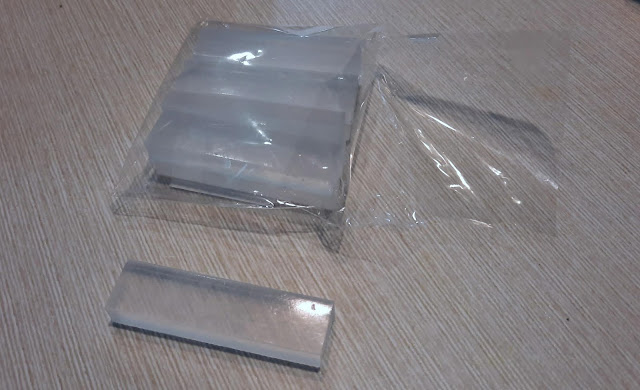 Here's the Oyumaru in its natural form. You can also get it in blue, and it's on Amazon at a very reasonable price given it's reusable. Once you've moulded what you want, you can chuck the mould back into hot water and make another one. In theory you could make molds for any bit you want. This guy uses it to make bits for his Tyranids and even uses it to mould an entire Space Marine Scout figure. I've got a lot of Oldhammer fantasy minis that need shields and I only have four, which is why I bought it in the first place. 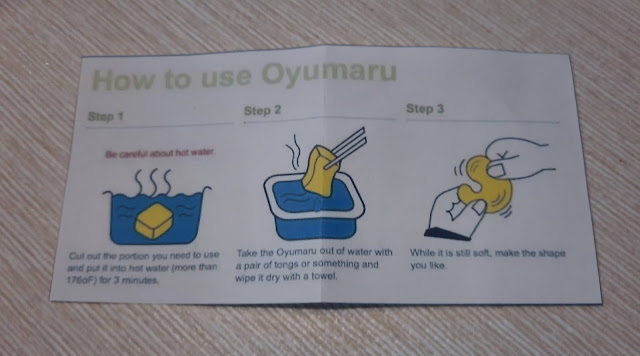 The instructions are pretty basic, and I love the "or something" bit. I put a pot of water on the cooker to boil (I don't own a kettle, and I'm pretty sure that admitting to this heinous crime invalidates my British citizenship, so please don't tell Her Maj). Once the water heated up I chucked in a couple of bars of Oyumaru. 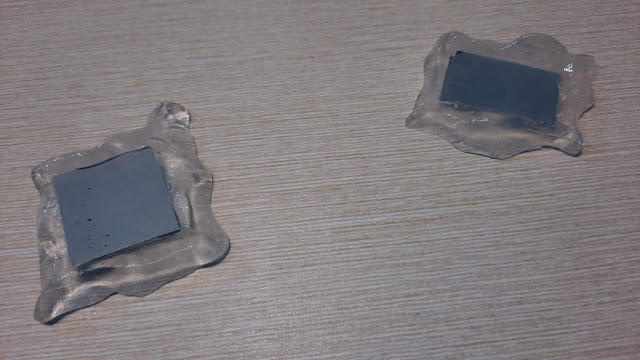 I really had no idea how much I'd need to make all the bits I wanted, so I ended up using both sticks just for the door and dumpster lid. I'm sure with practice I'll use less and be able to mould more stuff in one go. But it was dead easy to do; just get a blob of it, flatten it slightly, and press in the bit you want to duplicate. I wasn't sure how long I had to wait for it to dry, so I gave it a good hour. 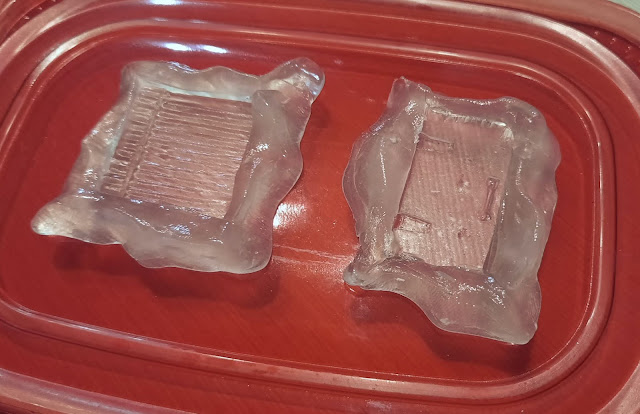 I peeled the moulds off and was left with these. They're on a red tupperware lid to make them more visible. The diagonal lines you can see on the door mould to the right are on the back, and come from the kitchen counter, so I'm not worried about them.

The pieces came out of the moulds with no issue. You don't need to use anything to prevent sticking. Apparently the Oyumaru doesn't even stick to itself, so doing two-part moulds isn't a hassle.

Now I have to fill the moulds with something. I swear I bought Milliput a couple of years ago but it's vanished, and I also thought I'd picked up some cheap Crayola clay of the type Keith used to base his excellent Baba Yaga hut and 'Eavy Metal-worthy wyvern, but I can't find it. So for the first two pieces I make I'm stuck with greenstuff. Yay.

Here's the sheet after being stuffed into its mould...

...and the door. The back of the door is a mess because I was stuffing small bits of greenstuff into it and moulding them together with a wet toothpick. I'm not bothered about this as it's not going to be seen. The moulds are ridiculously large, so I'll trim some of the excess off and re-use it. 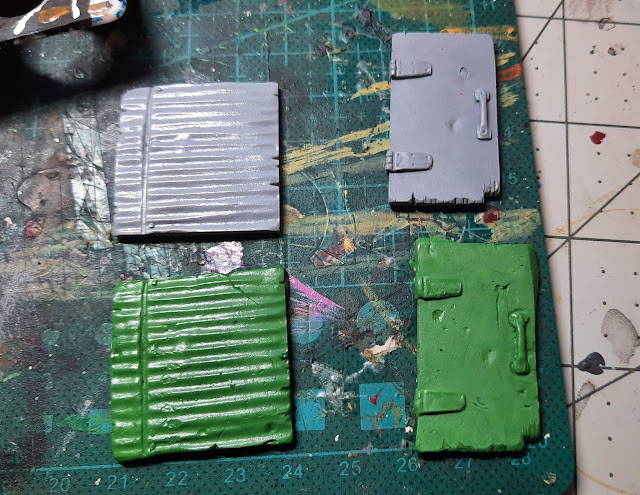 After leaving them for the best part of 10 hours, I checked their solidity with another toothpick. In true greenstuff fashion they still weren't fully dry, but firm enough to be removed from their moulds. As you can see, compared to the originals they're pretty spot-on. The door will need to be trimmed on its right side and the handle is a bit soft, but aside from that they turned out great. The imperfections on both just mean that if I make more, at least they won't be totally identical.

The moulding material is incredibly easy to use, even for a muppet like me. The potential for it is endless, from my original plan of making more out-of-production Chaos shields or scenery bits right up to producing entire minis. To make a full mould is easy: just put the bit into the warm Oyumaru, wait till it cools, then heat up some more and stick that on top. The Oyumaru doesn't stick to itself, so you can peel off the top and bottom halves with ease (at least from what I've seen on YouTube).

The only thing I need to get is something that isn't greenstuff. It's a pain to work with, is expensive and takes way too long to dry. I've ordered some air-drying clay from Amazon but as that's going to take a week to get here I'll pop to Walmart tomorrow and look for more of that cheap Crayola stuff.