Apocalypse Me: The ones that didn't make it 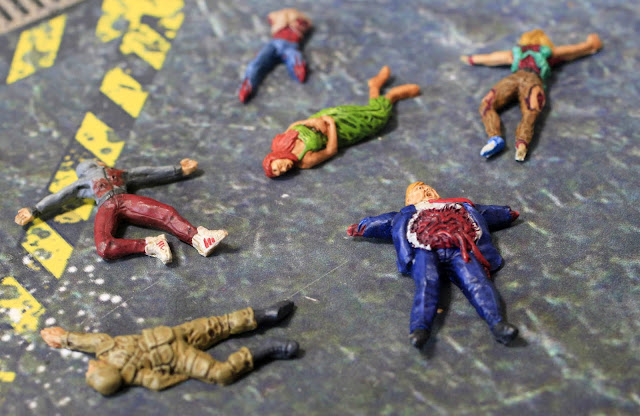 I saw these TTCombat corpses on Amazon in late 2018 and bought them with the same amount of thought a Kentucky meth head gives to stealing car stereos. These chaps have spent almost three years lounging around in the Magical Box of Unloved Lead, and the double whammy of Zombtober and Apocalypse Me is the perfect reason to finally get at least some of them painted.

I have to admit to being a bit let down when they turned up in the mail. The ones on TTCombat's site are not exactly what I got; mine looked like they were lying in puddles of plastic (the site says they're resin, but they feel more like plastic). Luckily the excess is simple enough to carve off and once primed they're easy to paint.

I think these'll make for good MacGuffins in a zombie game like No More Room In Hell. I came up with names and biographies while painting them, despite not having yet having played a zombie — or for that matter, any other — game. I guess they could be used as scatter terrain too. 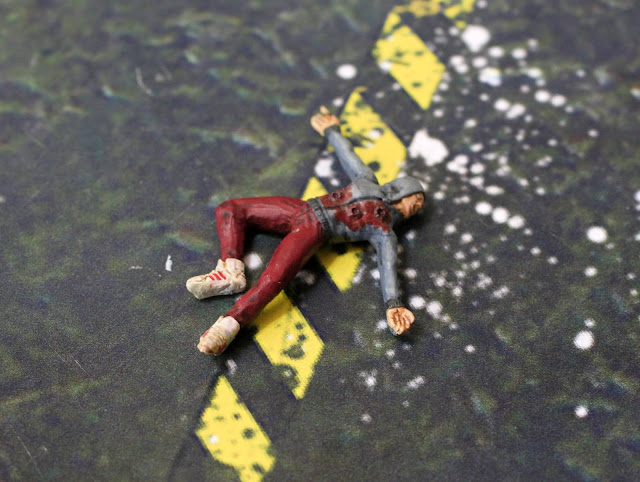 Dekko was the local drug lord until a rival took the opportunity to blow him away in the initial zombie-inspired mayhem. Several scouting parties have reported his non-zombified state, leading Dr. Zander to demand someone go get the body.

His top is Neutral Grey and his trousers Black Red. I'm happy you can actually tell Dekko's wearing Adidas boots. 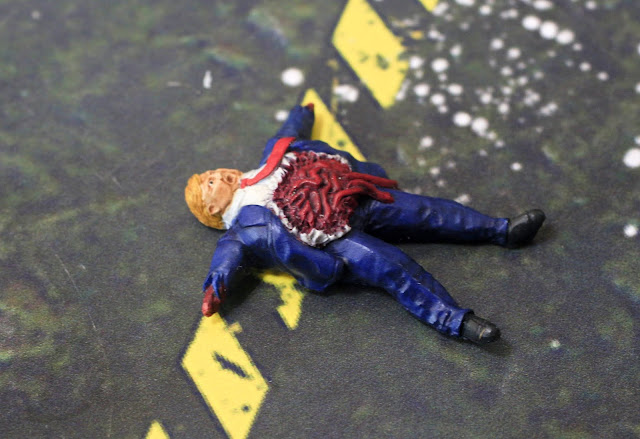 Fat Don owns — or, rather, owned — Donny's Guns 'n Ammo. It's locked up tight with bars on the windows, an alarm system with its own power source and contains enough rifles, pistols, bullets, shells and other goodies to turn the most screaming liberal into a raving gun nut. Legend has it that the keys and the alarm combo are in still in his suit pocket, but no one's survived long enough to find out...

Fat Don is so named because he resembles a real-life lump of lard called Donald. I don't think the resemblance was done on purpose by TTCombat but it was close enough for me. His suit's Dark Prussian Blue highlighted with Ultramarine and his innards are a mess of Red, Flat Red, Carmine Red and Vermilion, with some Blood for the Blood God and Druchii Violet. 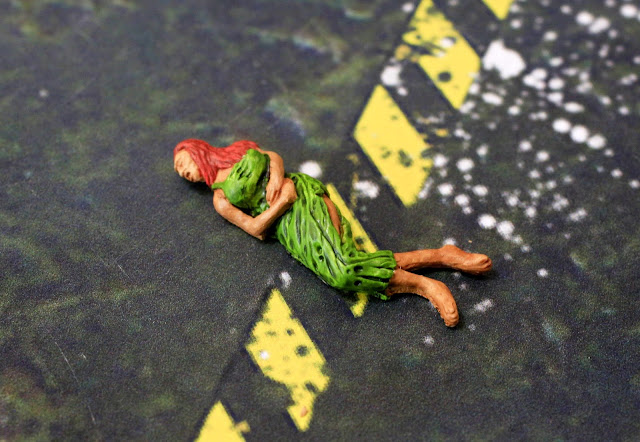 Diane owned a record store until she wandered outside one day to see what all the fuss was about. Unfortunately for her (or fortunately, depending on your point of view) she took a bullet to the head before the zombies could get to her. Thanks to her bright green dress she's become a landmark for scouting parties to get their bearings.

I like Diane's sculpt but I really should have paid more attention to doing a better job of her feet; she looks like some kind of weird hobbit. Still, Olive Green worked well for her dress and some Cavalry Brown and Wild Rider Red did the job for her red hair. I'm not sure if her dress is supposed to be shredded or was actually sculpted to look like seaweed. 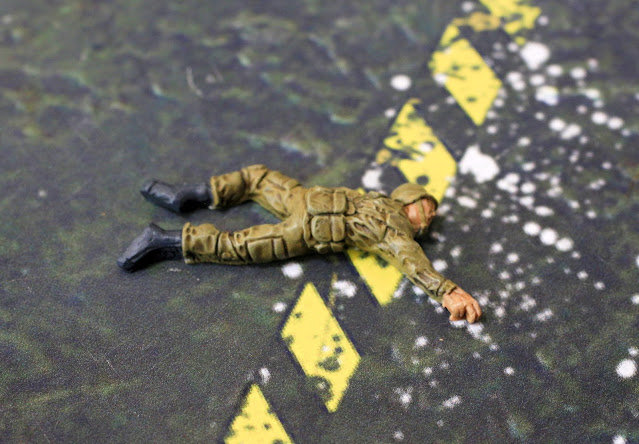 Pfc Joe Frost was one of the first soldiers sent into Ground Zero of the zombie outbreak, and in a tragic twist was one of the last to be killed when he was taken down by the advancing horde. Joe still has plenty of ammunition in his pouches and there's a rumour going round that he's got an experimental serum somewhere on him.
I could have gone for a camo scheme on Joe's fatigues, but didn't. Instead I went for a basic Khaki scheme, shaded with Strong Tone, and Black for his boots. He was by far the easiest one to paint. 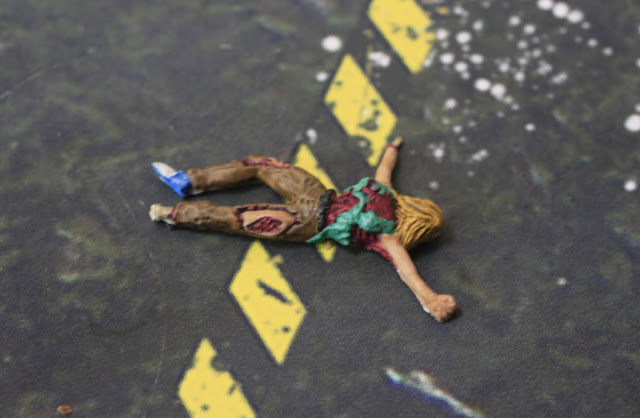 Sadie was heading out to meet her boyfriend for lunch when in an ironic twist she ended up being the main course for a couple of zeds. She has actually reanimated but thanks to her snapped neck she can't move, so survivors are sure to stay away from her grasping hands.
I was stuck for colours to paint Sadie's clothes so just painted her in the colours I was wearing that day: a green t-shirt and brown trousers, using Park Flat Green and Flat Earth. Her wounds were painted the same way as Don's. 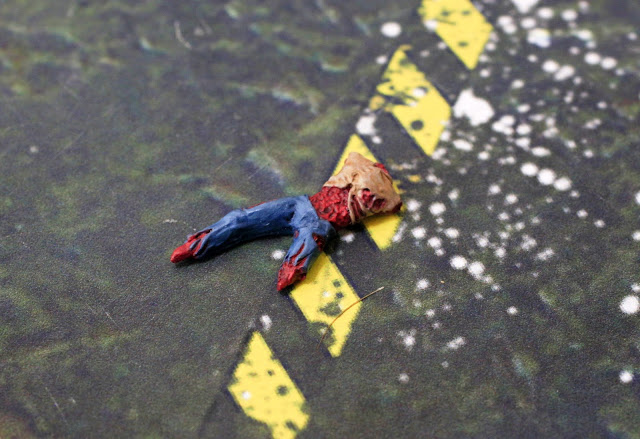 No one knows who this poor bugger is, but he's been a buffet for the local shamblers for a while now. Whoever he is, losing his head at least saved him from an eternity of wandering around his hometown eating his former neighbours. Like Diane, he's become a way for survivors to know they're heading in the right direction.
First off, I apologise for the stray eyelash in the photo. Anyway, every time I look at this mini I think it's a topless Spider-Man thanks to the red and blue. Flat Blue was perfect for his jeans and again the wounds are a mashup of several reds and some Druchii Violet. I do like how his shredded skin looks; my flesh mix shaded with Flesh Tone worked really well.
In some awesome news, my Hasslefree minis finally turned up in the mail on Saturday. So stay tuned for them, although they take longer to paint than the zombies.
Labels: apocalypse me, female, horror, painting challenge, terrain, tt combat, zombie