An Ultramarine medic and a trip down memory lane 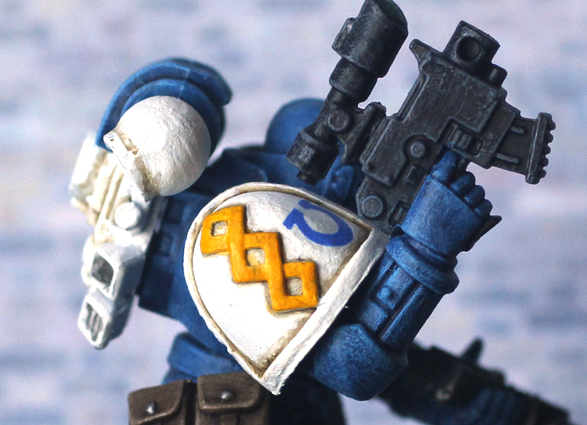 It's 1989ish. I'm in the corner of Flynn's attic flicking through the Warhammer 40,000 Compendium, one of the rulebooks for a roleplaying/tabletop war game that he's bought while Flynn gets on with painting his Blood Angels. I'm not particularly interested in playing the game but I am enjoying the batshit insane 80s artwork and the background stories. 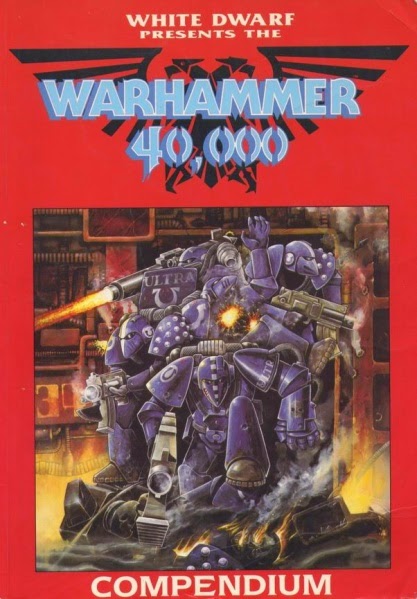 I mean, just look at the cover. Is it any wonder I ended up painting and playing Ultramarines?

The Compendium was, as its name suggests, a mish-mash of articles, rules, artwork and assorted fillers that Games Workshop chucked together in the wake of WH40K taking off like a cash-stuffed rocket made from small metal figures (and the rocket is still going strong). As I'm flicking through, a full page illustration grabs my eye. 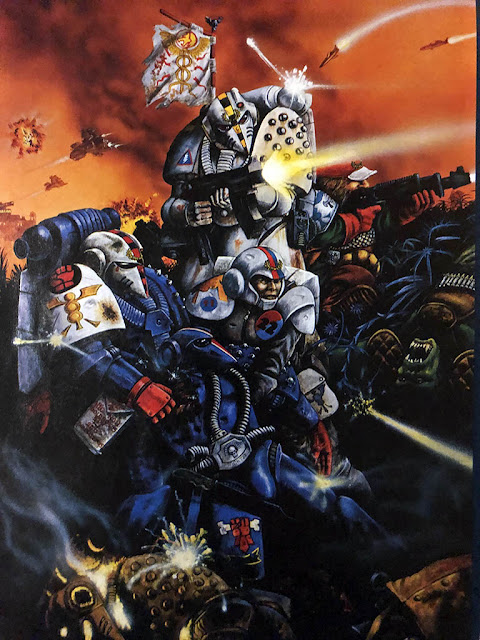 I had vague 30-year-old memories of this picture but they were as nothing compared to seeing it in all its glory. It's magnificent. For the uninitiated, we have two Marine chapters (Space Wolves in grey, Crimson Fists in blue), an Imperial Guardsman (the human) and, amazingly, a Squat. He's the bloke to the right with the trucker cap and beard. Squats were dwarfs in space with a biker gang theme. They were unceremoniously dumped by Games Workshop, leaving any poor sod who'd bought and painted the figures with a useless army. And if you'll bear with me for a minute, the Marines are not much bigger than the guardsman; this was before they turned into the eight feet tall genetically altered posthumans we know and love today.

It's also so much better than the painfully static and unrealistic art Games Workshop started using just a couple of years later: 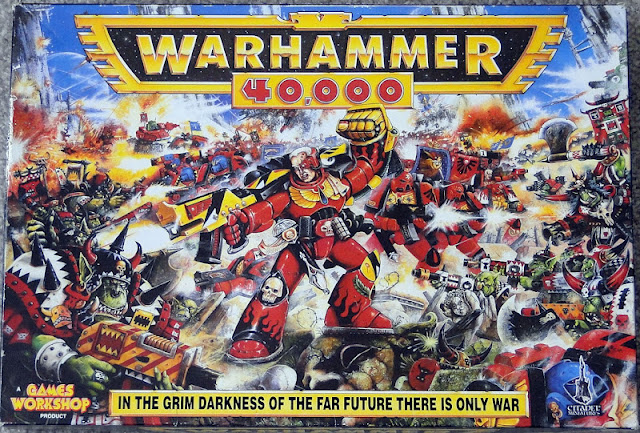 THIS IS WHAT HAPPENS WHEN YOU GET RID OF BEAKIES. Anyway, back to medics. After my attention was totally grabbed by that picture, I saw this much more basic pic: 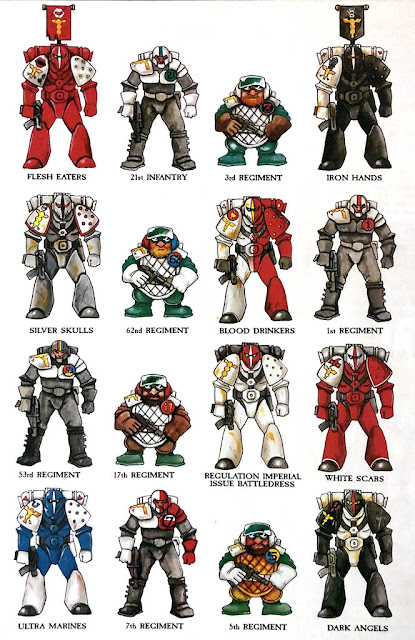 Or, to be specific, this bit: 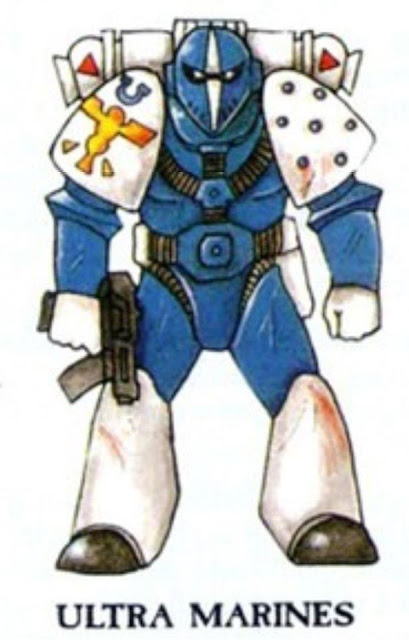 I'm in love. Seriously, this is the coolest thing I had ever seen (give me a chance, I was 17 and the world seemed full of endless possibilities). The combination of blue and white, the weird logo on his shoulder pad, the bloodstains on his leg armour, the nifty white gloves... they're all awesome. Note that Ultramarines were still "Ultra Marines" back in the grim dark days of the late 1980s.

I mentioned that I wanted to get some plastic marines and start building an army, and Flynn kindly gave me one of his to paint. I set about it with all the confidence of someone who was used to slapping enamel paint on 1/35th scale Airfix and Tamiya kits and had never heard of acrylics — let alone shading and highlighting — and had also never painted an inch-tall figure. As you can imagine, my medic didn't turn out too good.

From that one plastic marine, I went on to build an army of Ultramar... I mean Ultra Marines that looked a bit like this one, just not as well painted.

Skip forward 30 years. I live on a different continent. My Ultramarines are long, long gone. I'm approaching 50 and my teenage years are a dim distant memory. I've got back into painting miniatures but after seeing the prices of Games Workshop figures I've sworn off them. But I have fond memories of that first medic and I've heard of "bitz" that you can get on Ebay. So I decide to take a peek.

Ten minutes later I'm the proud owner of enough bitz to make about 30 marines. Oh dear. I don't want to build an army again so I decide to paint them up as different chapters. But I carefully select the bitz I need for one in particular: an Ultramarine medic. I don't have the "official" Citadel colours any more — Marine Dark Blue and Ultramarine, or whatever trademarkable name they're called these days — and the idea of painting large areas of white terrifies me. But I sit down, my paints, glue and bitz arranged on the cutting mat in front of me, and go back in time. 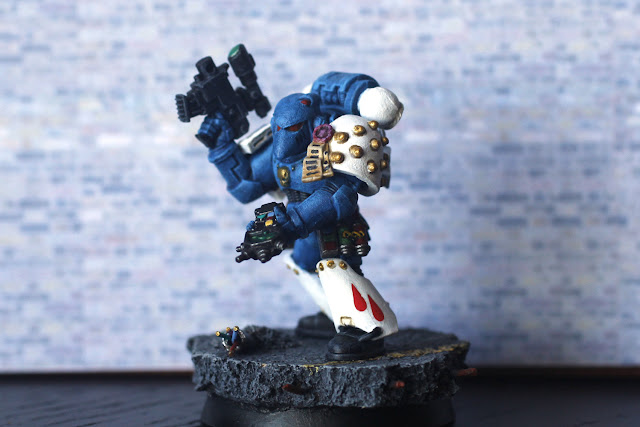 And here he is. Firstly: yes, you're right, the armour isn't 100% beakie. His helmet and shoulder pads are correct but his legs and torso are a different armour mark (MkV to be precise, which didn't even exist in 1989). Anyway, on to the painting. I did the blue bits first using the logic that it's easier to paint blue over errant bits of white than vice versa. I chose Army Painter Crystal Blue as it seemed closer to what I'd think of as a 1980s Ultramarine, washed with Blue Tone to bring out the shadows. The hightlighting's Crystal Blue lightened with Electric Blue.

The observant among you might have noticed a few differences between him and his artwork counterpart. His gauntlets are blue, not white. I noticed this three days after I painted him. For some reason back then the helmets always had a stripe down the centre... as if I'm going to attempt that. Likewise I didn't even bother having a go the red triangles on his backpack. And his helmet lenses are red instead of black because all my Ultramarines had red eye lenses. 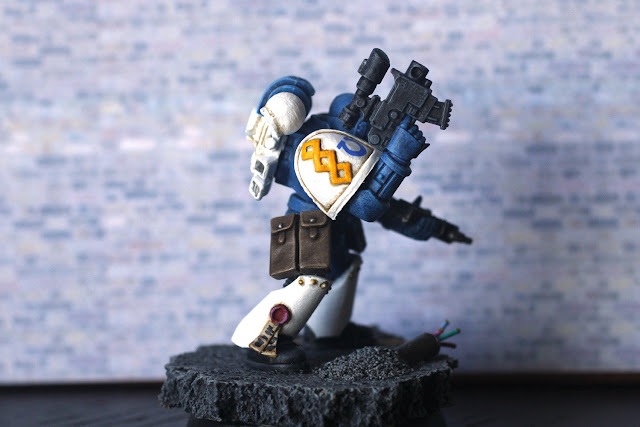 The white bits... dear God, the white bits. Everyone has a colour they hate painting, and mine's white. How do you highlight it? Or shade it? Because of this I'd avoided white like the plague. But I opened my pot of Army Painter White and did my best. His shoulder pads and backpack were painted before being attached, and his greaves (the lower leg armour) were done very, very carefully. It was then that I realised I'd forgotten to do his boots, so I applied Vallejo Black slowly until I could breathe again.

His right hand is a separate piece so I had to superglue it on, and as you can see it's not perfect. I chose a hand holding a bolt pistol as I'm 99% sure that's what my '89 medic had. I think.

The purity seal was moulded to the greave, so yay I get to crap myself while applying Army Painter Dragon Red and Skeleton Bone right next to my perfect white. Yes, dear reader(s), it never occured to me to paint the seal first. The studs on his knees are Vallejo Brass. His equipment pouches are in Army Painter Monster Brown, shaded with Strong Tone and highlighted with Leather Brown. They're supposed to be white, but I wanted an easier life. The bolt pistol is Vallejo Black highlighted with Dark Grey, with Army Painter Jungle Green for the sight.

The embossed logo on his shoulder pad is the Prime Helix, which is really boring compared to the original version in the Compendium artwork. It's supposed to be red but keeping with the 1989 theme I've painted it Army Painter Demonic Yellow glazed with Vallejo Transparent Yellow. The small Ultramarines emblem is from a sheet of transfers I got as part of my Ebay splurge. 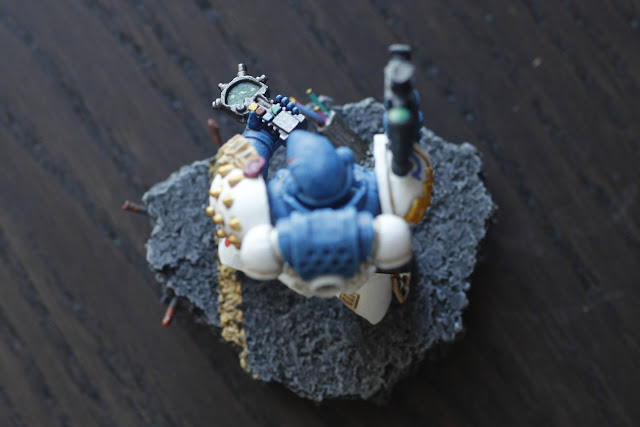 The thing he's holding in his left hand is an auspex scanner, which I'm fairly sure is the WH40K version of Star Trek's tricorder. I tried to paint the screen to look like radar, sort of like those tracker things from Aliens. Like I said, I tried. It's Army Painter Plate Metal washed with Dark Tone. The screen is Vallejo Black Green with some Army Painter Jungle Green dots washed with Green Tone to dull them a bit. 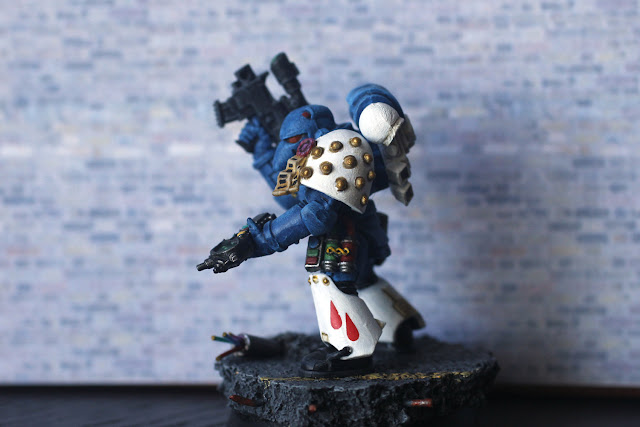 At this point in my painting I was unaware that Vallejo Grey Wash is an actual thing, so I had to shade his white armour and backpack with Army Painter Soft Tone. The studs on his shoulder pad are Vallejo Brass, and I had the same fun and games with the purity seal on the pad as I did with the one on the greave. I remembered something about medics being the only Ultramarines allowed to decorate their armour with blood drops (probably for doing something medic-y) so I gave him two. They're both transfers. The thingamajig attached to his thigh is another Ebay bit. I can't remember what it's called or what it's supposed to be, but for 75¢ I'll  buy it. 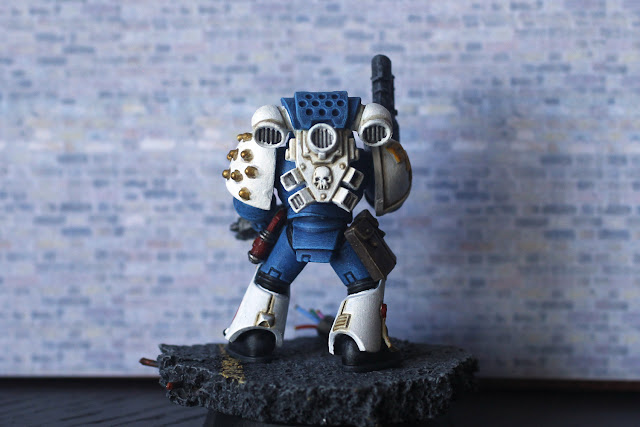 I decided to to do part of his backpack in blue to break up the white. The exhaust vents are shaded with Army Painter Dark Tone. 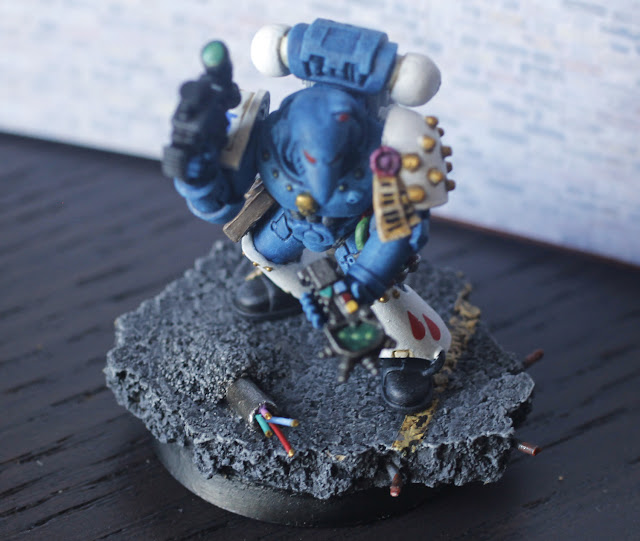 His base is made from a piece of cork tile. It's painted black and highlighted with Army Painter Uniform and Ash greys. The yellow marking gave me a chance to finally use my masking tape and it didn't fail me. The bits of rebar sticking out of the cork are snippets of a paperclip painted Army Painter Plate Metal and daubed with Rust effect paint.

The cable coming out of the ground is made from a plastic straw cut to length, painted Plate Metal and glued in place. The wires are short lengths of brass wire painted Vallejo Brass (yes, I painted real brass with brass paint to make it more realistic) then painted different colours to imitate wiring. The pile of gravel the cable's coming out of is just a very small pile of sand glued on in layers.

So there he is. He cost about $5 in bitz, a tad more than the 33p — or 60¢ — his 1989 equivalent cost. He was fun to paint and he looks really good. Oh, and you can still get medics, only now they're called Apothecaries, they're those new-fangled Primaris figures and a plastic one will set you back $35.
Labels: 40k, army painter, basing, citadel, games workshop, space marines, ultramarines