A different kind of mini 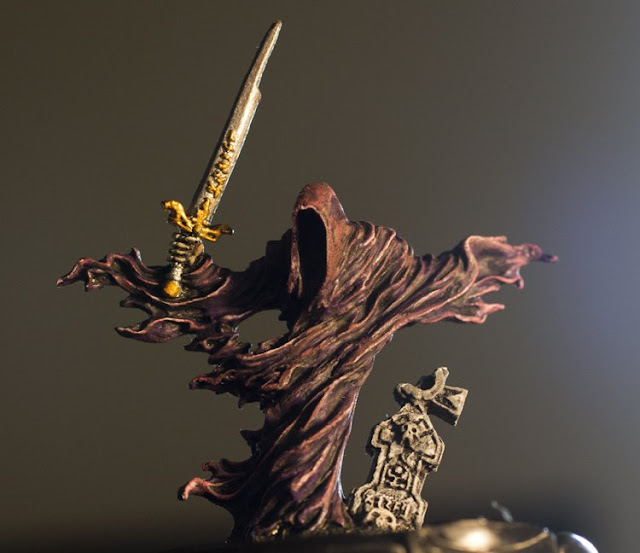 I painted this grave wraith by Reaper Miniatures in July 2018. It was the the first miniature I'd painted in 25 years, and I think I did an OK job on it.

Now, I know what you're thinking: "So if you painted this 18 months ago, why are you only writing about it now?" To be honest I'm not entirely sure. I wanted to get back into blogging again — my last attempt died from neglect (but might be resurrected) and the original Planet Mut vanished after some bastard snagged the domain name. I enjoy painting miniatures and, with the proliferation of miniature painting blogs, I thought, why not?

As to why I got back into painting minis, I'm actually stuck for an answer. I'm pretty sure I was looking at stuff on Amazon when a few popped up in the "what other customers looked at" bit, and for a second I was hurled back in time to 1989: Flynn's attic, plastic RTB01 Space Marines, the scent of Citadel paints and The Sisters of Mercy's Floodland on permanent repeat.

So I started to look at the minis on Amazon. Now, the only minis I used to paint were Games Workshop's Space Marines. When I were a lad, a box of plastic Marines  — the aforementioned RTB01, with the glorious cover art — set you back ten quid and provided you with 30 inch-high killing machines.  Metal Marines were around £1.50 each. So you can probably understand my amazement and my language when I discovered that these days, a tactical squad of 10 marines costs $25. For plastic figures. And they're not proper Marines, they're these weird new ones and everything is bloody Ultramarines for some reason and dear God stop me before I go off on one.

Anyway, I googled Reaper and found their site. Within minutes was feeling like a five-year-old on Christmas Eve. Then commonsense kicked in.

"Hang on a minute. You're not 17, you're in your late 40s. You have rent and bills. These things aren't cheap and you have to buy paints, brushes and OH MY GOD THEY DO ZOMBIES".

Back to Amazon to check on how much paints cost. When I started the hobby a pot of Citadel paint cost 50p. I was expecting the price to have gone up but I didn't think that 75ml of acrylic paint would now cost $5. So after some searching I found a box set of 50 Army Painter paints that had a good rating and cost $99. At $2 a pot it seemed reasonable, so I ordered them, some brushes and then went back to Reaper.

I didn't get any zombies, but I did get the grave wraith and a few others. Painting the wraith was an education in itself — I forgot about primer so just used white paint. I forgot about flash, the little ridges of metal left over from the moulding process, and what a pain it is to scrape off. I forgot to wash it to get rid of dust and oils. I took forever to choose a colour to paint it. The brushes I'd bought were good but not that good. The colour I chose took four coats to cover properly. It came with an integral base and spent three weeks blu-tacked to a Powerade bottle lid.

Most of all, I could not see what I was doing half the time. My eyesight, which since the age of 11ish has never been great, has totally gone down the tubes now. More on that in another post.

But I really enjoyed painting the wraith.

And those other few other figures? Eighteen months on, most are languishing in a storage box waiting to be painted because — as everyone in this hobby knows — the number of unpainted minis you own must, by law, exceed the number of painted minis by a factor of hundreds.

Most of the posts on this new blog will be of figures I've already painted. I'll probably do a few step-by-step posts too. I don't think I'm an awesomely outstanding painter but I enjoy doing it. It's creative, it's engrossing and best of all it doesn't involve staring at a sodding screen.
Labels: army painter, citadel, games workshop, miniatures, reaper, space marines, wraith