Season of Scenery: Some bits and pieces 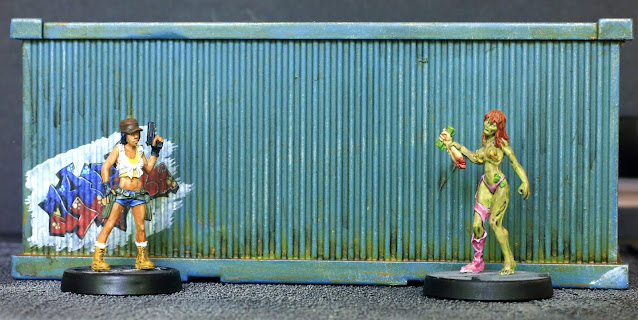 Rihanna's waiting for Mercedes to shuffle a bit closer.

The first, and by far easiest, thing I did was make a base for the fence I built back in February. Like my barricades, I just used a piece of foamboard, bevelled the edges, and covered it in PVA and sand. Once dry it was painted with cheap craft paints to match my billboard and shaded with homemade black wash. The fence is propped up with a couple of short lengths of coffee stirrer painted Deep Sky Blue and given a quick shading with more black wash. I didn't bother to use the chipping medium on them just to speed things up a bit.

With the fence in place I added a small barrel (is it a beer keg?) on one end of the base, a couple of traffic cones and the inevitable tufts. 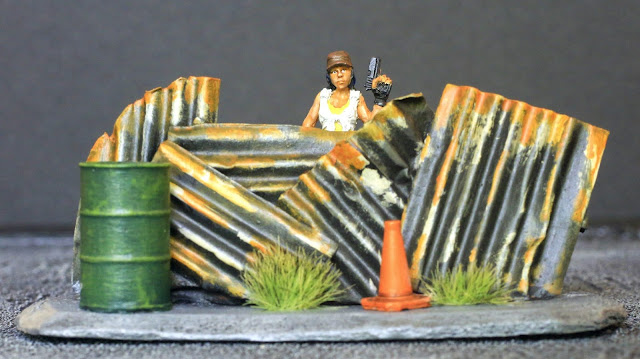 I also knocked up a couple more barricades using the same techniques as last time. Here's Rihanna hanging out behind one...

...and here's Dakota taking aim from behind the other. This one has a bit of mesh to protect the person behind the shorter bits of corrugated iron. I added oil barrels, tufts, a cone and a girder made from chipboard to the bases. Both bases warped slightly because I left the paper on the foam, which was a bit of a mistake. 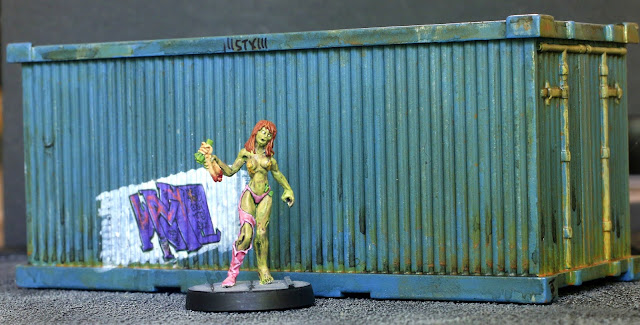 The shipping container is by Reaper. I bought it months ago and it's been hanging out on a shelf since then. It's a perfect bit of scenery for the challenge, and was fairly easy to paint. I gave it a once-over with a spray paint called Nantucket Blue, which turned out to have a satin finish. Whoops. After giving it a coat of matte varnish I gave it a very basic drybrush with silver craft paint and then hit it with homemade black and rust washes until I was happy. It got another coat of varnish, and then I roughly brushed on some patches of thinned Off-White and added the decals. The softener I used really made the decals conform to the shape of the container.

I toyed with the idea of putting the container on a base, but decided against it. It works as a standalone piece.

The egg is still a work in progress, and I'm trying to get another building constructed from foamboard.