Jersey barriers and a Lambo

Earl, Calvin and Lazarus take shelter behind some concrete barriers and get ready to fend off the zombies heading their way. Edna is there for moral support and cats.

I bought these jersey barriers last year off Amazon. They're by Ender Toys, they of the really rough 3D printing, and I had to sand the crap out of them to remove the horizontal print lines but still retain some texture. You get eight for $10: two sloped end pieces and six regular barriers.

They were all painted the same basic scheme: sprayed with grey primer, then daubed with Strong Tone and drybrushed with Ash and Ghost greys. I used a pointed sculpting tool to add bullet holes and cracks to some of them, and a few had slices carved off the edges to represent damage.

Once that was done it was a case of thinking up graffiti designs, which were drawn on with a pencil and then painted over.

I really don't think the teeth worked on the left endpiece, and I could not be bothered to think of something for the other one so left it blank.

The barriers are scaled really well for 28mm figures and look really good once painted. They are very light — I'm pretty sure they're hollow — and are just asking to be knocked all over the gaming table when the zombie horde comes along.

And now for the Lamborghini. 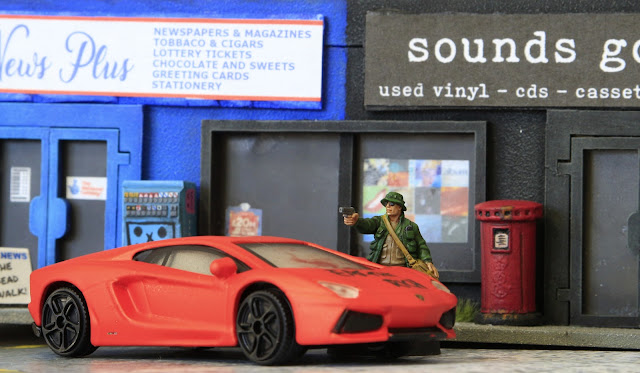 This Aventador is another cheap 1/43 scale car from Dollar General, and was a stocking stuffer pressie from Alicia at Christmas. I could not face doing another spray-and-latex rust job on it, and I thought that maybe a $400,000 car wouldn't rust too easily. So I just sprayed it with matte varnish to dull the paint. 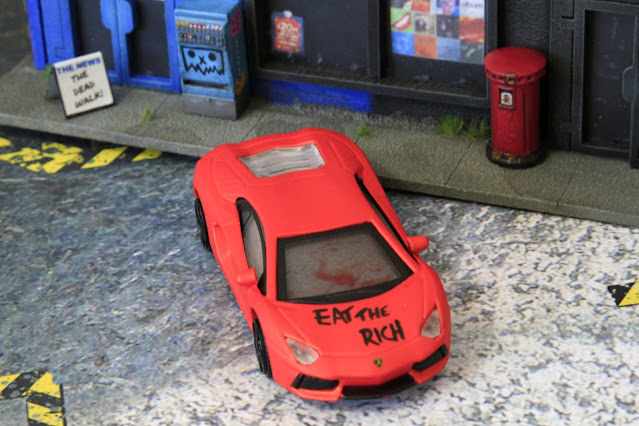 I also took the body off, sprayed some Blood for the Blood God onto the inside of the windscreen, and added some suitable graffiti to the bonnet.

And as you can see, I finally found a use for one of the pillar boxes that I painted back in February last year. I'm aiming for a mix of British and American influences on my scenery and the pillar box helps with that idea.