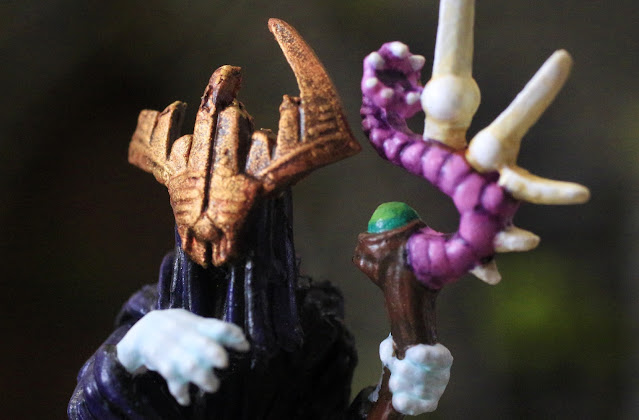 Much like the Herald of Razmir, I'm not entirely sure what the Crimson Herald is actually heralding. Is he a proponent of deep red shades? The mascot for a daemonic Blood Bowl team? Advertising a sale at the local Evil Я Us? Whatever he is, it gave me an excuse to whip out the chapel and the door again.

A quick look at Reaper's site tells me he's an undead wizard and was also the Disciples of Cthon Iconic Summoner from ReaperCon 2016... whatever that means. I bought him last summer and I've been working on him on and off over the past month when he really should have been belted out in an afternoon.

As you can probably tell, I went in a different direction than "crimson". After painting a few red minis over the past couple of months, I took an executive decision to be bloody sick of the colour and decided on black. 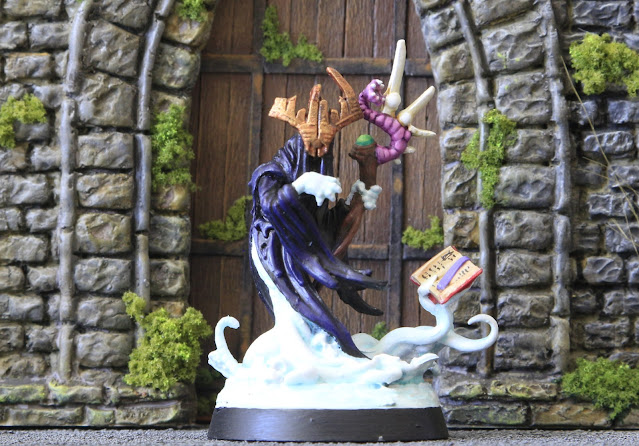 Hez, as I'm calling him from now on, is the plastic Bones version of the mini, and as such much hilarity ensued while trying to carve off bits of flash without cutting any actual parts off. Once in a decent state he was glued to a 32mm base and I added modelling paste to hide the join.

He was sprayed with grey primer at the same time I did all the vents and bits for my new building. A quick coat of Black worked for his robe, and I highlighted it with successive layers of Violet and a bit of Purple. He does have a few areas that are fiddly to reach, especially the insides of his robes. 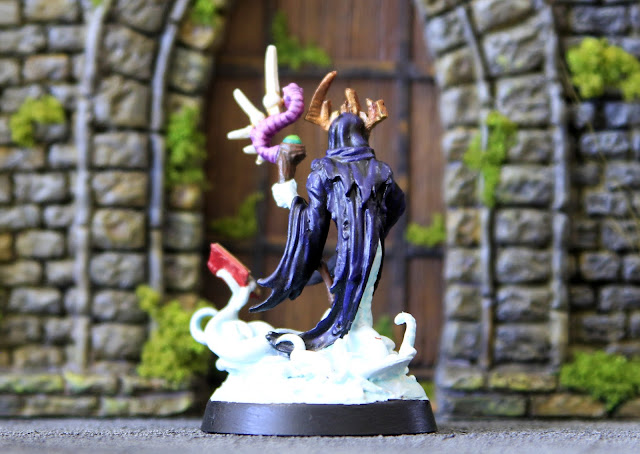 With the black done, I turned to the details. His staff is Burnt Umber and Mahogany Brown, and the little worm creature coming out of it is Pink with Druchii Violet. I couldn't work out what the spiky things are, so I just did them as claws with Ivory, White and Sepia Wash.

His book is Red with Bonewhite pages, and his crown is Gold with lots of Flesh and Sepia washes. I wanted to paint a pentagram on the pages like I did for my Cultists of Cthulhu but I ended up accidentally painting a Star of David by mistake. Luckily I don't hold any demonic rituals in real life, 'cos if I did I'd end up summoning Mel Brooks to the basement.

Like I said, why I couldn't have got him done in an afternoon is beyond me. He was pretty straightforward to do once I'd decided on the colours. 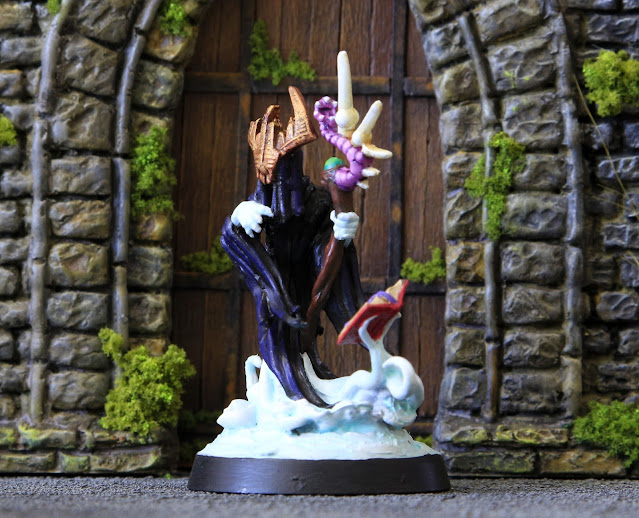 Hez comes on an integral base, which takes the form of what look like either tentacles or swirls of smoke. I decided that he should be appearing out of a swirl of ectoplasm or something equally ethereal. I know there's a Citadel shade that's designed for painting ghosts (or whatever trademarkable name GW is calling ghosts these days) but I don't own it and I'm not doing a 25-mile round trip in the snow to get some. 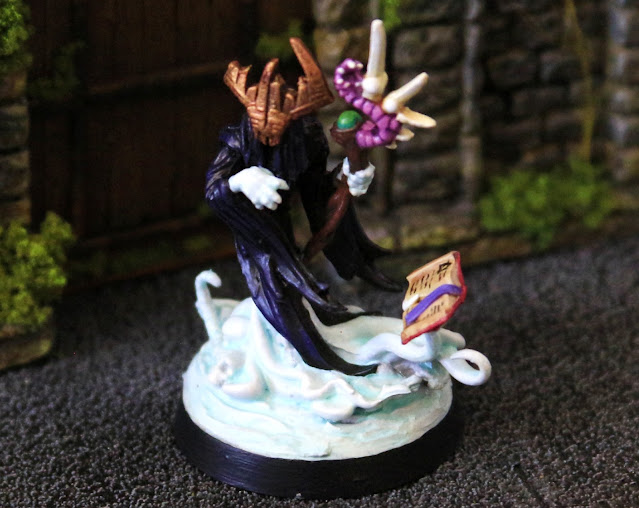 So I bullshitted my way through with my own recipe: paint all the base white and then make a wash with Vallejo Verdigris and a ton of water. Wash over the base several times, then go over the high points with more pure White. At this point I realised that if he's materialising out of some phantasmic mist his hands should probably be the same colour, so I had to do the White paint and Verdigris wash all over again. I think it worked pretty well, it's just a shame you can barely see it in the overexposed top photos, so above is one I underexposed... and you can still barely see it.

Only four days till I get to open the new building, and there's more random scenery to come!