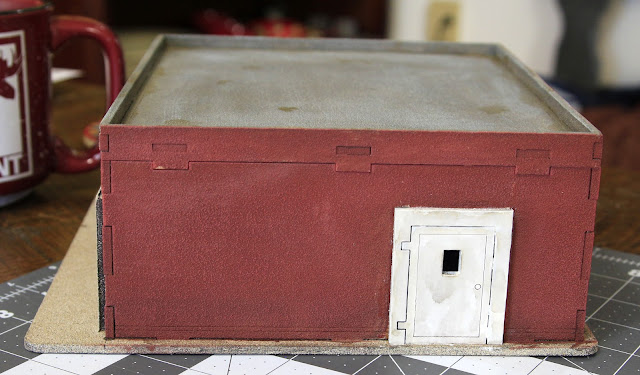 After two days in the mudroom the texture paint was completely dry, and better yet it had stopped stinking the place up. It was brought into the warmth of the spare room to be painted while the detail bits were drying in the garage after being sprayed with grey primer. 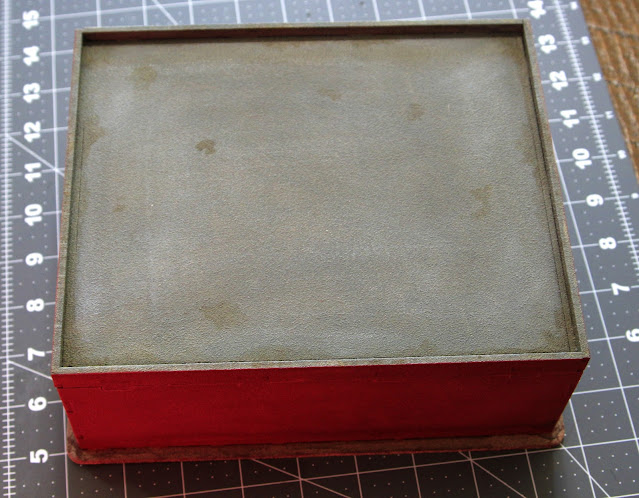 I started with the roof, painting it with Pewter Grey craft paint as I'm not using relatively expensive Vallejo or Citadel shades for an area this large. Once dry it was given a generous shading with watered-down homemade black wash, then drybrushed with Granite Grey craft paint. Daubs of Soft Tone wash help vary the colours a bit.

The roof isn't glued on yet as I still have to block the insides of the windows and doors with black card. 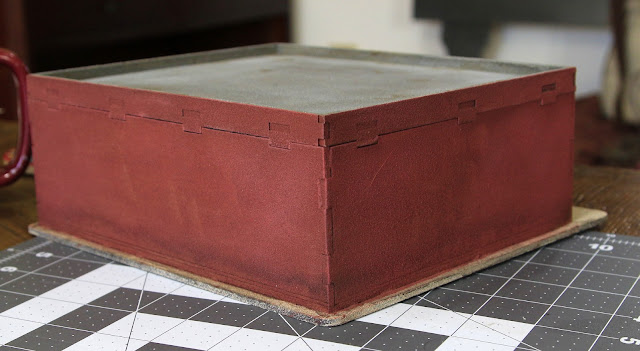 The back and sides of the store and the outside edged of the roof were given two thinned coats of Vallejo Terracotta and then shaded the same way as the roof. To highlight the walls I first mixed a bit of Ivory with the Terracotta, but it didn't do enough. I had a burst of inspiration from somewhere and mixed Bright Red and Khaki craft paints to get an odd pinkish tone, and used that instead. It did the job pretty well. The wash left a bit of a tide mark around the bottom of the walls, but I'm not too bothered as it just adds to the random messy look I love.

I've painted a bunch of coffee stirrer sticks Terracotta so they'll be ready to cover the corner joints and hide the inevitable gaps. I've also made a sort of light to go over the side door, but I'm in two minds as to whether it'll work. 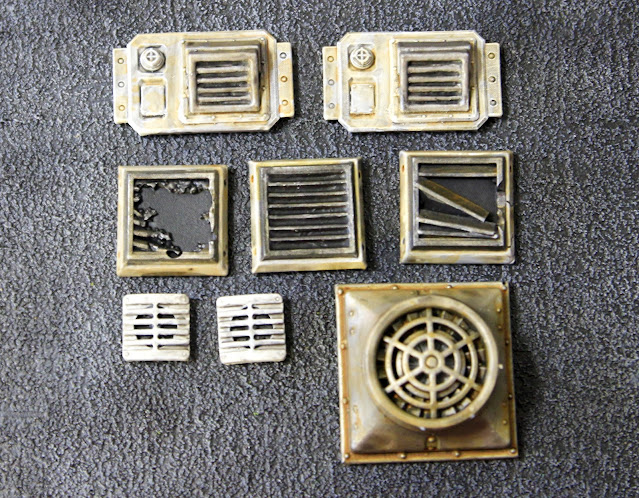 Onto the bits. All the large vents were painted Off-White, Black and Plate Metal, and then washed with Nuln Oil and my homemade rust wash to make them look weathered. The two smaller ones went through the same process, minus the Plate Metal and rust. I did have four of these small vents, but two vanished somewhere between the garage and the spare room and are presumed eaten by Erebus.

The medium and small vents will go on the walls, and the biggest one will go on the roof. It's Plate Metal, black wash, rust wash and some Silver to highlight it. I also painted some lengths of plastic rod to use as random pipes.

With the vents out of the way I hit the vending machines. In hindsight, spraying the drinks machine grey was a mistake as I then had to paint 95% of  it black. Duh. The cans proved to be more of a pain than I thought; they're fiddly to paint but look good once they're done. After doing a row of Coke cans, I went for Pepsi, Sunkist, 7-Up, and Fanta Grape.

Like the vending machine I did for the convenience store, I had to add graffiti and as usual had a hell of a time thinking of some.

The cigarette machine was painted Deep Sky Blue, washed with Nuln Oil to dirty it up, then highlighted with Sky Blue. I wanted to get as many cig brands on it as possible, and I think they're identifiable. For the uninitiated, they are (in no particular order) Benson & Hedges, JPS, Craven A, Marlboro, Embassy, Regal, Consulate, Woodbine, Lambert & Butler and one other I can't remember.

I added more graffiti to the front and sides, and gave it a coat of varnish. It's my fave of the vending machines I've painted so far.

I wanted some kind of electrical junction box to liven up the back of the store, and I found some TTCombat news boxes (I think that's the term; after 25 years in newspapers I should probably know it). I cut the stand off it, painted it Mechanicus Dark Grey, added some dirt courtesy of Nuln Oil and drybrushed it with Neutral Grey. The two panels on the front inspired me to paint it like a robot, so I went for Bender from Futurama. I think it's OK to say that an attempt was made.

I'm still deciding on what the actual stores should be. At the mo I'm going for one being a newsagent's and the other a coffee shop or maybe a record store. This explains why the front hasn't been touched for now. I do have a couple of ideas for the newsagent's which I'm hoping will work when I get around to doing them.

I'm also hoping the vents and vending machines will count for Dave's Paint What You Got challenge. I have a couple of figures on the go as well as the store, so hopefully I can get those done in time for the challenge.
In case you missed the first thrilling installment, part 1 is here.
Labels: atomic laser cut designs, euphoria miniatures, mdf, scenery, tt combat, zombie