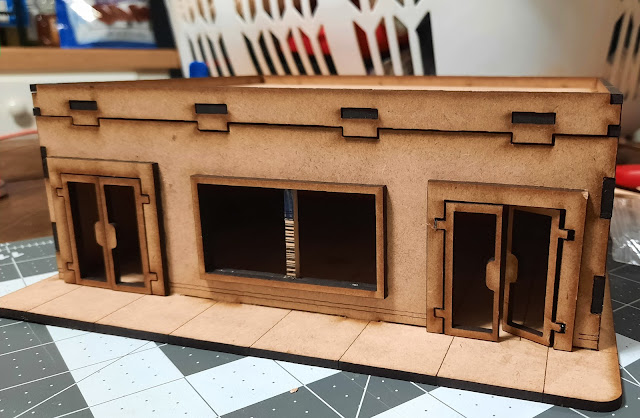 Not literally, obviously. I'm terrible with budgets and maths leaves me in a cold sweat. I'm so bad at it that if you asked me to pick a number I'd probably say "X".  I resat my GCSE Maths four times and got a solid D every time, so at least I'm consistently crap. If I ever actually opened a shop I'd be bankrupt by lunchtime on the first day.

Anyway, this MDF masterpiece is a Christmas pressie from Alicia's awesome sister. Like my first convenience store it's made by Atomic Laser Cut Designs and is called Store Front BC200, part of their Big City Streets range. It's supposed to be one shop, but as you can see in the top photo, I've used a short length of balsa wood to split the main window so I can do each half as a separate business.

Construction was very simple and with the aid of superglue it was stuck together in no time, except the roof, which won't be glued on until I've blocked off the doors and windows with black card. The door on the right is slightly open because I have an idea for it, which 100% depends on finding one thing I need in one of my many storage boxes.

Here it is next to the convenience store. It's a bit wider but is the same height and depth so it matches up really well. I masked the doors and windows ready for spray painting.

Ignore the bits of coffee stirrer stick on the roof; they'll eventually go across the doors and windows. I also need to cut up more to cover up the inevitable gaps at the corners. 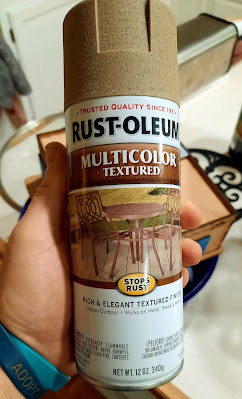 Unlike last year I'm not going the PVA-and-chinchilla-dust route as I just can't be arsed waiting for the glue to dry, let alone cleaning up the mess, even though that technique worked really well. Instead I'm going to try to save time and effort by using this textured spray paint. 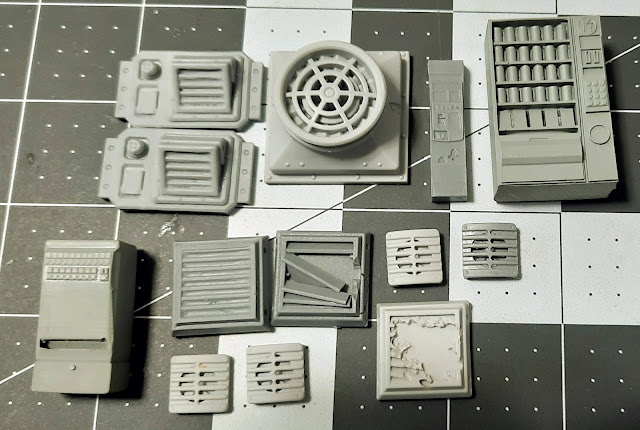 I hunted through my bits box for vents and vending machines, and was not disappointed. I thought the narrow thing next to the top vending machine was an ATM, but I just remembered it's a parking meter, so never mind. The one on the bottom left is a cigarette machine... I cannot even remember the last time I saw one of those in the wild.

The store and all the bits were taken downstairs to be spray painted. 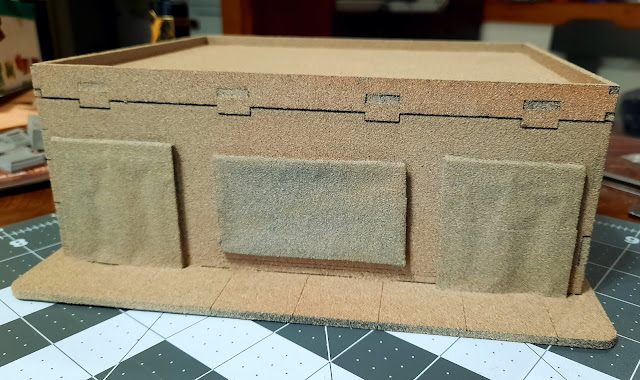 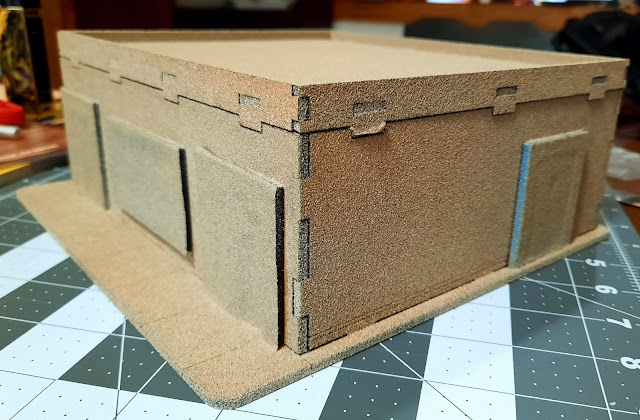 The texture spray worked really well despite me having misgivings when spraying it on because it looked like someone had dumped wet sand on the building. But it's given a good layer of roughness over the structure which will help with highlighting and weathering. Ignore the beige/brown colour; the sides and back are going to be painted terracotta, the roof grey and the front will be different colours for each business, once I decide what they're going to be.

The accessories were all primed grey and I'm going to work on those next as the building stinks of spray paint and I've just been ordered to get it out of the kitchen. It's headed to the mudroom for the night.

Be sure to tune in for the next thrilling installment!