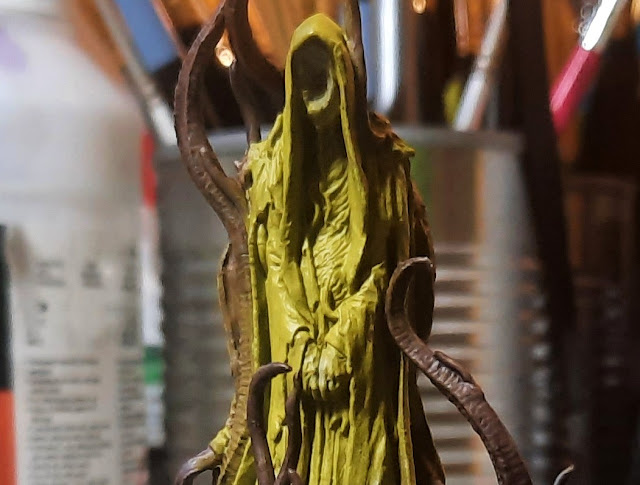 I think I went a monster too far. Why couldn't Robert W. Chambers have written The King In Literally Any Colour Except Yellow?

The actual model is superb, creepy and off-putting as a Lovecraftian horror should be. Which is odd, as Lovecraft mentions Hastur exactly twice — in passing — in The Whisperer in Darkness:

I found myself faced by names and terms that I had heard elsewhere in the most hideous of connections—Yuggoth, Great Cthulhu, Tsathoggua, Yog-Sothoth, R'lyeh, Nyarlathotep, Azathoth, Hastur, Yian, Leng, the Lake of Hali, Bethmoora, the Yellow Sign, L'mur-Kathulos, Bran and the Magnum Innominandum...  There is a whole secret cult of evil men (a man of your mystical erudition will understand me when I link them with Hastur and the Yellow Sign) devoted to the purpose of tracking them down and injuring them on behalf of the monstrous powers from other dimensions.

Hastur was created by Ambrose Bierce in the short story "Haïta the Shepherd" (1891) in which he's a benevolent character, and Chambers took the name for a city that appears in his short stories "The Yellow Sign" and "The Repairer of Reputations", collected in The King In Yellow (1895).

Lovecraft was an avid reader of weird fiction, and was influenced heavily by what he read. He was a huge fan of Chambers' anthology and introduced Hastur into his works as one of his Outer Gods. After his death August Derleth canonised the various monsters and horrors into the Cthulhu Mythos, and Hastur officially joined the club.

Anyway, back to the mini. 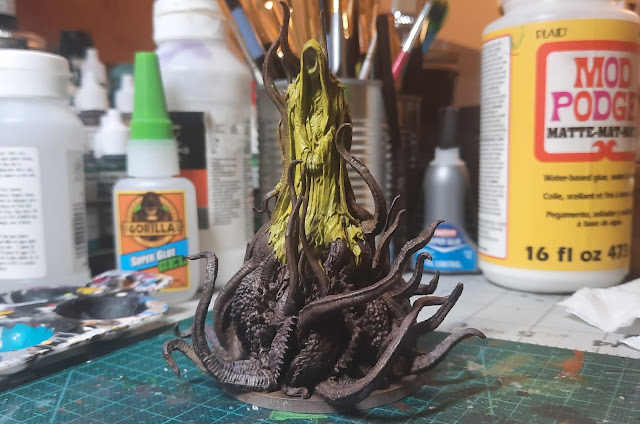 This is as far as I got before I ran out of time. The tentacles are airbrushed with Malefic Flesh, which is a hell of a lot browner when used on such a large model. That threw me, as I was then totally stuck for a shade tone and a highlight colour. I originally shaded it with Sepia Wash and that was a disaster as it basically didn't show up once dry. I redid it with Purple Tone and got the above effect. So far, so mediocre, and I still had no idea what to use for a highlight.

But it was the yellow, the YELLOW, that killed my will to live. There's a reason I avoid it except for little bits (Baker is a good example) or blonde hair. But I can't avoid it with Hazzer, and every brush stroke reminded me of why I hate this bloody colour. I actually airbrushed him first with Daemonic Yellow, which I thought would help with coverage. All I can say to that is BWAHAHAHAHAA!

So, to the regular brush. Coat after coat, and every one more pointless than the last. Dave gave me some advice in a comment under one of my posts on how to paint yellow, but unfortunately it involves Citadel paints that I don't own. I think I need to buy whichever yellow basecoat I can find, either Vallejo Heavy Gold Brown or Citadel Averland Sunset. Checking Amazon, it amazingly doesn't have the Vallejo colour so I'll be heading to Bennington to shell out on Citadel's basecoat.

Hastur will be done, and done soon, but he'll be getting a bath in Simple Green first as I'm done staring at him in despair. Which reminds me, Hastur's four cultists, which look just as crap as their master, are currently in their third bath and will also be done once I've got a base colour.

I'm pretty annoyed that I gave up on Hastur, but I look back over my output during Monster May(hem) and I'm not going to let this git get me down. I managed 40 of the 45 minis that came with Cthulhu: Death May Die — 20 monsters and 20 humans — and I also got a couple of expansion figures done with Yog-Sothoth and Wilbur Whateley, and an Elder Thing that didn't come with C:DMD. So that's 23 monsters over the past 31 days, which kind of craps all over last year's total of five. There's also four non-Lovecraftian monsters I didn't get to this month, including a troll, two dragons and a pig ogre. All of those are in various stages of being done, and I'll hit them soon.

As with last year, I had a great time taking part in Monster May(hem). It did involve a lot of coffee, swearing, synthwave, Slowdive and vaping, and there were days when I was painting at 6.30am, but it was totally worth it. Thanks to Keith for dreaming it up.

Here's the final list of what we all accomplished:

Keith, the instigator of insanity, painted a wyvern that could have jumped off the pages of 'Eavy Metal as well as Baba Yaga and a Ripper Beast.

Azazel of Azazel’s Bitz Box churned out a Carrion Crawler, a pack of raptors, a Carnotaurus and a Hornslasher,  trio of Void Hounds, a Harbinger Monster, a Balor Demon, a Dire Crocodile, an Umber Hulk, a Coral Golem and a Sand Kraken.
Dave of Wargames Terrain Workshop decided on a Star Wars theme this year, and went the homemade route with a wamp rat, a ghoel and a rock wart, a joopa and krayt dragon.
Roger from Rantings from Under the Wargames Table sculpted and painted his own tentacled eyeball and  sabre tooth tigers.
In his first appearance in the challenge, Mark of Markamorin.com built and painted an Aztec sacrificial altar, and an Aztec Temple High Throne.
The Good Ground's Tom, another newcomer to this mass madness, painted a Balor Demon, something  called Siren Head and a Red Slaad.
Jeremy at Carrion Crow completed his Ithaqua the Wind-Walker.

Next month it's Forgotten Heroes, and I have an idea of what I want to do. I'm just not sure I can accomplish it. We'll see.