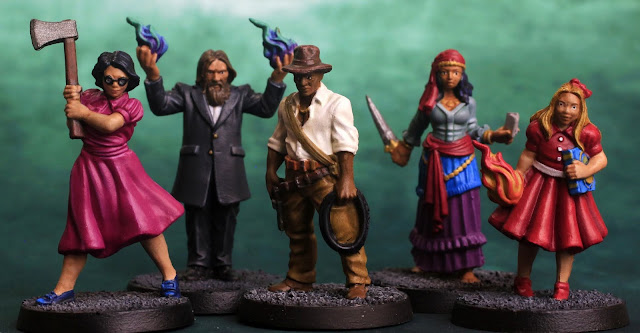 Oh, I almost got them all in focus this time!

Say hi to the other five paranormal investigators from Cthulhu: Death May Die. After painting the previous five in a couple of days, these ones took me a bit longer thanks to inertia, a couple of monsters, and a feeling that they weren't going too well. As before they're all based with sand painted in a couple of greys.

I'm cobbling together their bios from the information that comes with the game. 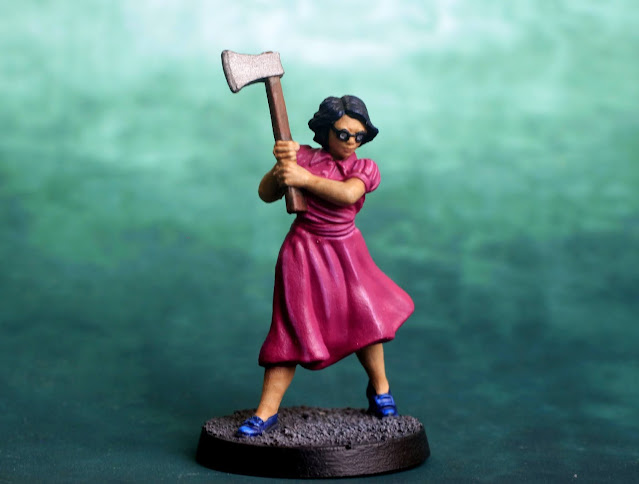 Borden is from Falls River, Massachusetts, and is pretty famous. She's described as having a "peculiar form of psychopathy" and delights in "sorting out the guilty".

She was the last investigator I painted, and again I deviated from the box art. Borden's supposed to wear a red dress, but as I'd just painted The Kid (see below) in red I didn't fancy doing it again. I used Wizard's Robe, a hot pink, for her dress, and Dark Prussian and Magic blues for her shoes. Her dress is supposed to have a floral pattern, but that's not happening. 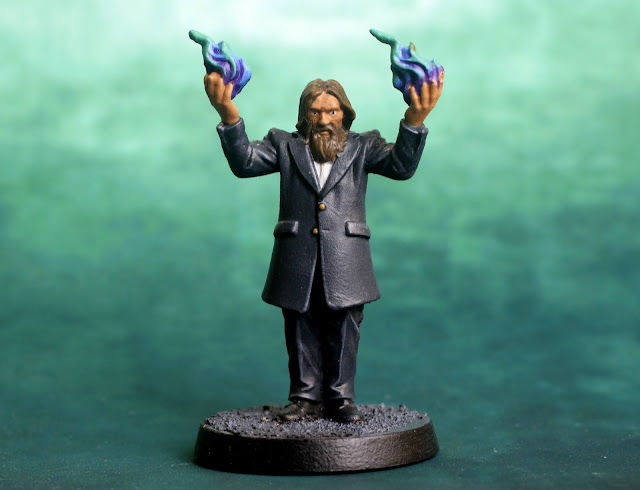 Ra-Ra-Rasputin, Russia's greatest love machine, hails from Moscow in the game (but Pokrovskoye, Siberia, in reality). Rasputin was captured by a cult, tortured, and ended up with "instant revivification" — in short, kill him and he'll be back very quickly.

He was the easiest one to paint; just Black Grey for his trousers, Dark Grey for his coat and Burnt Umber for his hair. The only issue was painting the flames in his hands. I've never liked these molded flames, and I've even seen Games Workshop minis where painters have cut them off. I wanted to make them look more mystical, so instead of the traditional red/orange/yellow I went with Violet, Andrea Blue and Emerald Green.

I sort of think I almost nailed it, although he does look like some nutter in a supermarket preaching to people via the medium of aubergines. 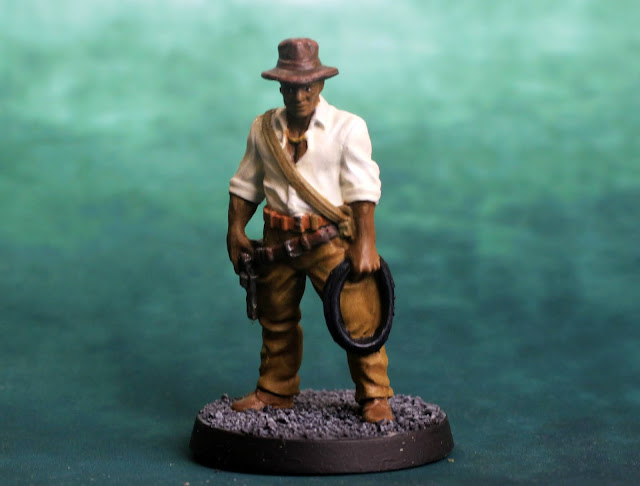 John Morgan, from Fort Wayne, Indiana, was an animal handler and safari master. He was hired to lead a cult expedition to the heart of the Congo, where he "brought that ruin down on their heads" when he found out what they were up to.

John was the first investigator to become one of those "can I please get this done" minis. Painting him just seemed to go on forever, not helped by my crappy brush control that got Khaki from his satchel strap on his Ivory shirt and vice versa seemingly about a million times.

His trousers are English Uniform, with Orange, Chocolate and Mahogany browns for the belts and hat. His skin is Flat Earth mixed with some Bonewhite for the highlights, and thanks to Dave for that tip. 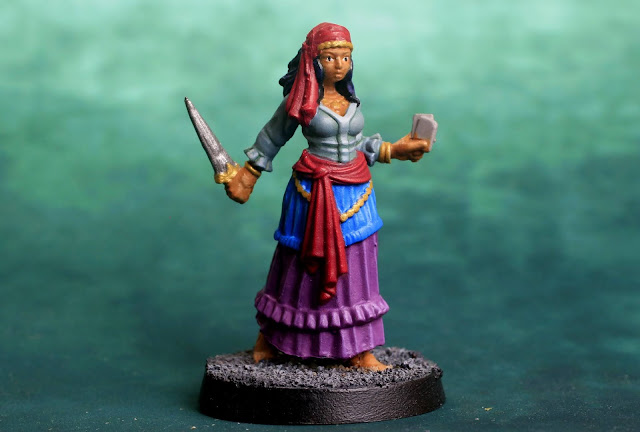 Fatima Safar hails from Alexandria, Egypt. Her ability to "connect dozens of minor phenomena into a an accurate prophecy" is second to none. I wonder if she foresaw me forgetting to paint her tarot cards?

Fatima's colours follow the box art to the hilt of her huge dagger. Her skirt is Purple, her other skirt is Magic Blue, her belt thing(?) IT'S A SASH (thanks, Dave!) and headscarf are Flat Red and her top is Light Sea Grey. Despite being the most colourful investigator, she was straightforward to paint.

Even her skin — Light Brown, with a touch of Bonewhite — looks good, and her eyes worked first time. Guess I'll be painting the cards later. 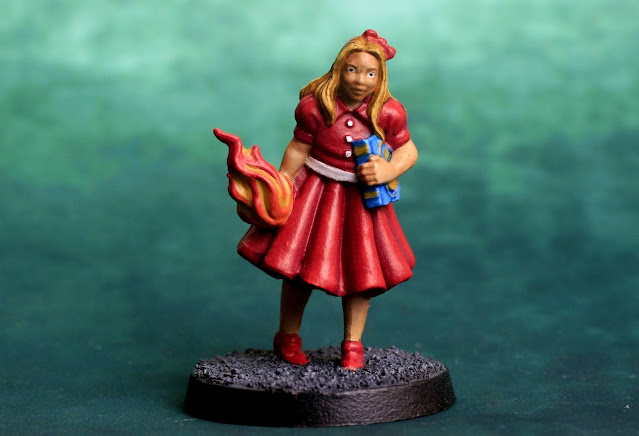 The Kid is simply known as The Kid. No one knows where she's from, and "apart from a gleeful cackle, she makes no other sound".

The Kid is supposed to have polka dots on her dress, but there was no chance of me risking buggering up a perfectly adequate paintjob. Red highlighted with Flat Red worked, and it was easy enough to do.

Like Rasputin she has fire coming out of her hand, and this time I went with the more traditional palette. Despite following a tutorial and ripping off several online images I still managed to make it look terrible. Still, her book looks good.

So that's all 10 investigators painted, along with three monsters. That leaves me with 32 C:DMD minis left to paint, along with whatever else I want to chuck in for Monster May(hem). And I have a gigantic pile of washing up to do after making chilli tonight. What a time to be alive!