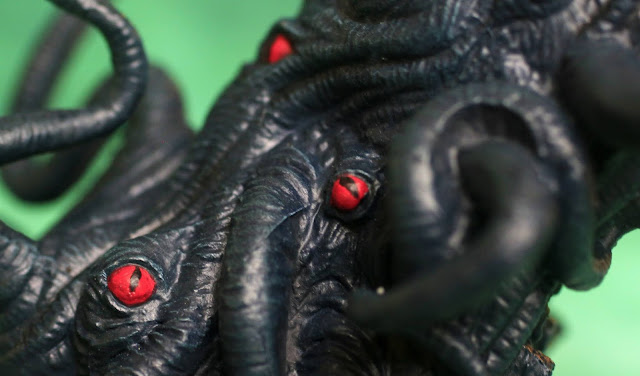 "Formless protoplasm able to mock and reflect all forms and organs and processes — viscous agglutinations of bubbling cells — rubbery fifteen-foot spheroids infinitely plastic and ductile — slaves of suggestion, builders of cities — more and more sullen, more and more intelligent, more and more amphibious, more and more imitative! Great God! What madness made even those blasphemous Old Ones willing to use and carve such things?"

They're the words of Professor William Dyer, the protagonist of Lovecraft's At the Mountains of Madness, as he realises the sheer horror of what shoggoths are, what they can do and what they might be capable of if they ever got to a populated area. If that sounds a bit familiar, there is a direct line from Lovecraft's 1931 story to John W. Campbell's novella Who Goes There? (1938) to John Carpenter's The Thing (1982). 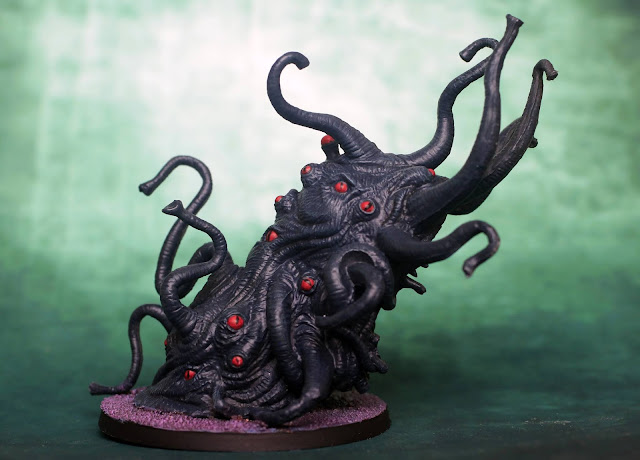 The shoggoth, which I've named Bob, is the first mini I painted from the Cthulhu: Death May Die game. I picked it just because it looked like the most straightforward one to do out of the 45 minis in the game.

Bob's a black gelatinous blob that can extrude tentacles and eyes at will. I don't particularly like all-black models as it's a dull colour, so after spraying Bob with black car primer I airbrushed him all over with Dark Sea Blue and washed him with Blue Tone. 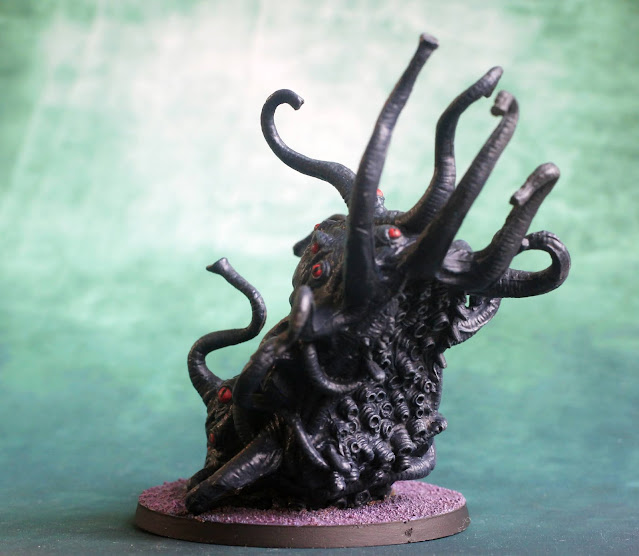 After lugging Bob upstairs to dry the wash with Alicia's hairdryer, I mixed a bit of Ghost Grey with the Dark Sea Blue and began drybrushing him. There are lots of bits to highlight and I'm fairly sure I got all of them. 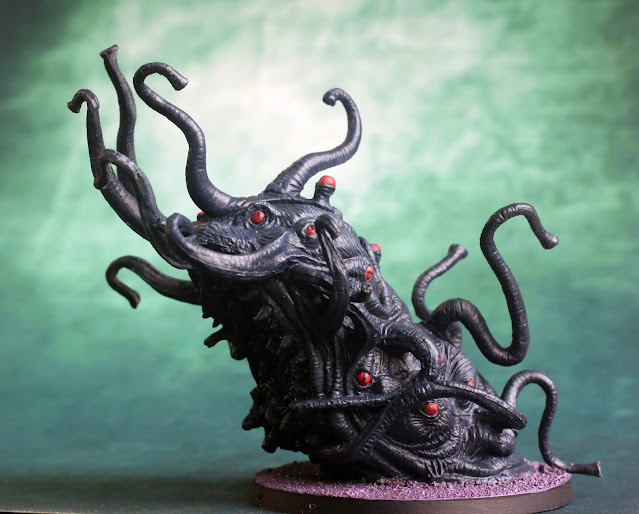 Looking at Bob from this angle, he could even make a decent Beast of Nurgle. Anyway, after three highlights I started on his eyes. Ugh. They're just Flat Red with black slit pupils, some of which worked and some of which we'll just not talk about. And Christ on a bike, I've just noticed I missed one of the pupils.

I didn't want to muck about too much with the base, so I gave it a coat of tacky glue and dumped on some sand. Once dry it got a coat of matte varnish to seal it, then a coat of Dark Grey and a highlight with Neutral Grey. As Bob now looked like he was oozing across an ashtray I gave it a final drybrush with Pink to provide a stronger contrast with the model. 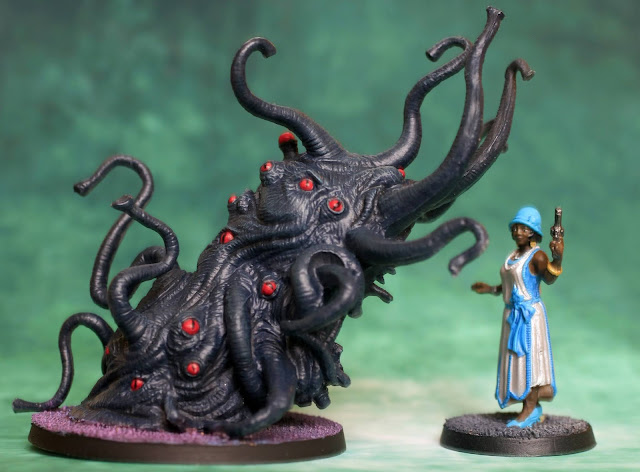 Bob menaces Lizzy Ives, the first Cthulhu: Death May Die investigator I painted. There's a post on them coming soon. Bob looks good, although he could do with better definition and depth in terms of highlights and shading.

I have a feeling that this month might be a bit Lovecraft heavy, so I'm digging through my boxes trying to find a monster that isn't an interdimensional tentacled horror.

The other willing victims participants in this year's Monster May(hem) are:

Keith, who started this madness, has begun with a superb Ripper Beast.

The Good Ground's Tom has kicked off with an excellent Red Slaad.

Azazel from Azazel’s Bitz Box painted up a great Coral Golem, one of Reaper's odder offerings.