Finally taking a look at Cthulhu: Death May Die 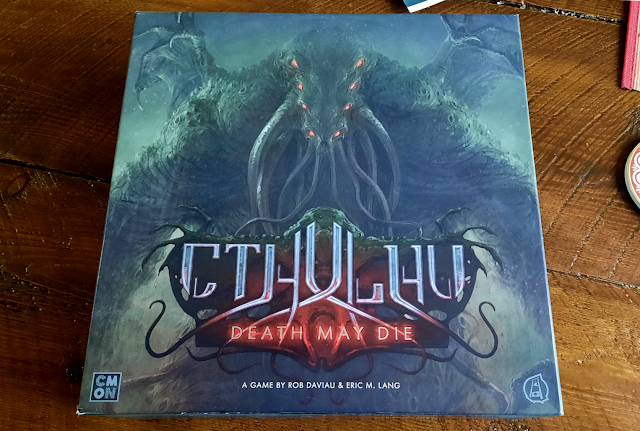 With it being Monster May(hem) — although this post isn't an entry — and with me now living only 40 miles from where one of Lovecraft's stories is set, I decided it's about time I cracked open the board game I bought back in November.

The game is made by CMON, and I stumbled across it on Amazon while looking for Lovecraftian minis by Reaper. Its (then) $75 price tag was a bit off-putting, so I did a quick google and found some rave reviews of the actual game as well as images of the 45 figures it comes with. So you can guess what happened next. The miniatures alone make it worth the money, especially when you see Games Workshop's prices.

In case anyone is wondering, "You bought this five months ago but are only now looking in the box?!" the game turned up only a few days before we left our rented house and moved into our own home, so I didn't have time. 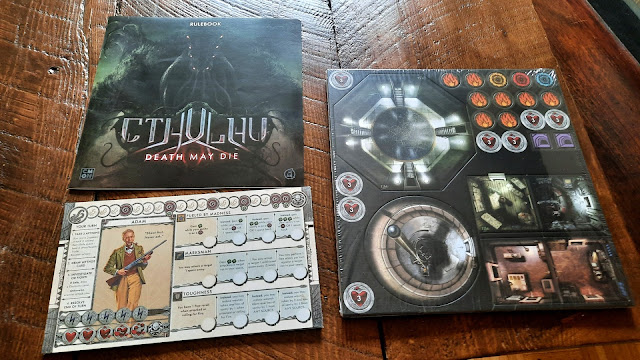 Anyway, I wiped the dust off the top of the box and removed the lid, revealing the stats cards, board pieces, tokens and a very slim rulebook. 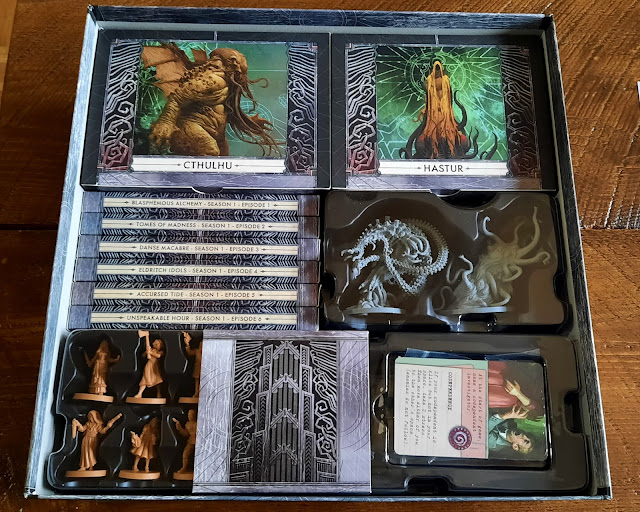 Beneath those are the minis and the episodes, so let's take a look at the plastic horrors inside. 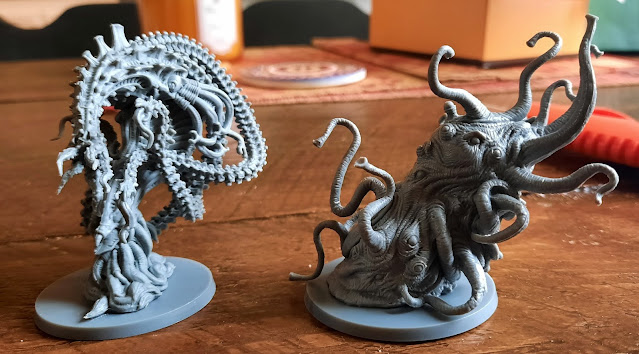 On the left is a cthonian, which has gone straight to the top of my "that'll be a bastard to paint" list. Chtonians are part of the Lovecraft mythos but weren't created by him; they first appeared in a short story by British author Brian Lumley, and later appeared in his novel The Burrowers Beneath. I haven't read it, and I have to admit I'm not much of a fan of Lumley's books. On the other hand, the Kindle edition is $2.99 so I might give it a go.
On the right is a shoggoth, a protoplasmic horror created by Elder Things. Shoggoths are sentient blobs that are able to shape themselves to suit whatever task is at hand. The Elder Things used them to build their cities, until the shoggoths developed sentience and began ripping their creators' heads off, which is a bit of an extreme way to complain about your pay and conditions. 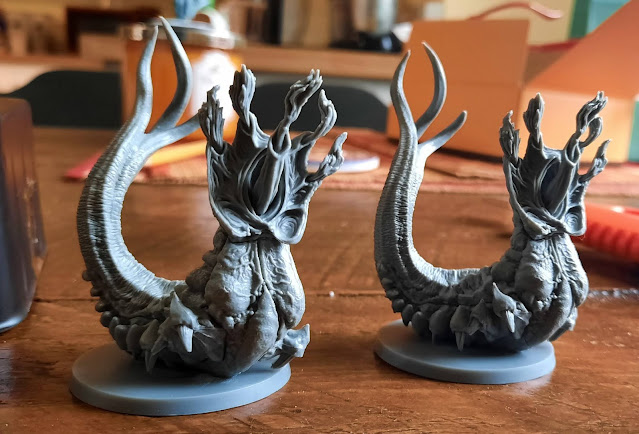 These are fire vampires, or to give them their full name, Fire Vampires of Fthaggua. They were created by Donald Wandrei in his 1933 short story "The Five Vampires" which mixed Lovecraft's mythos with science fiction, and from this rambling description sounds terrible. But they're awesome minis. 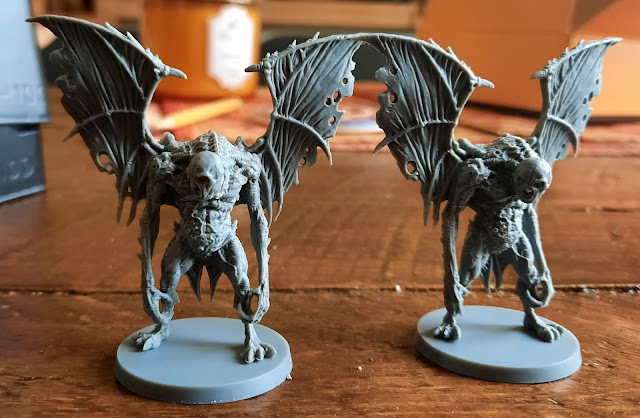 Next up we have a pair of byakhee, which feature in Lovecraft's short story "The Festival". I'm sure I've read it, but I can't remember it. Byakhees are interstellar predators and feed on their victims. Apart from the humans, they're the easiest-looking minis to paint. 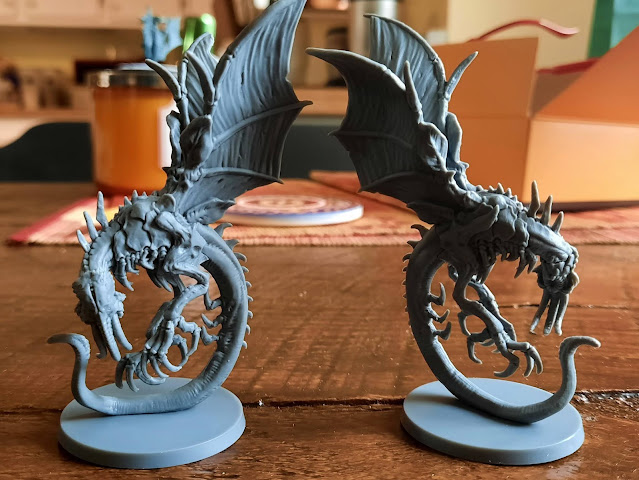 Hunting Horrors appear in Lovecraft's novella The Dream-Quest of Unknown Kadath. It's one of the few of his stories that I haven't read. Horrors serve as a kind of hunting dog, and can be destroyed by light.

A row of red-robed cultists and below them five Deep Ones and five Ghouls. Deep Ones are from Lovecraft's masterpiece The Shadow Over Innsmouth, which is easily one of his best stories. They're aquatic creatures that interbreed with humans. Ghouls feature in "Pickman's Model", about an artist whose paintings are very true to life.

Our first look at the intrepid investigators risking life, limb and sanity to defend the human race against cosmic horror. From left we have Rasputin, Lizzie Borden, Fatima Safar, Lord Adam Benchley and Lizzy Ives.

The other investigators, from left, are Sister Beth, The Kid, Major Ian Welles, Indiana Jones John Morgan and Ahmed Yasin. 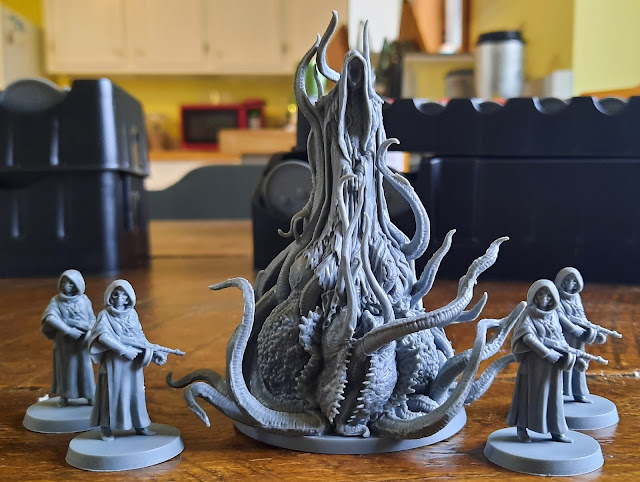 Hastur, The King In Yellow and some armed disciples. Hastur just shot straight to number one on my "that'll be a bastard to paint" list, displacing the cthonian, and as he and his followers wear yellow, they qualify for the Special Bastard Award. Yes, that is our microwave in the background. Our new kitchen table was the only place big enough to unpack the box. 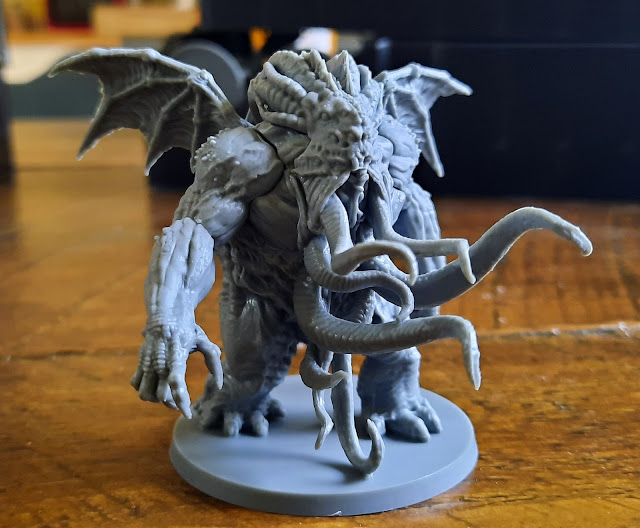 This is a star spawn, which are mentioned in At The Mountains of Madness. If you think it looks like a smaller version of Cthulhu you'd be right. According to the story, star spawn fought the Elder Things millions of years ago until they came to an awkward truce. They're also known as Cthulhi, which is just too cutesy for me. 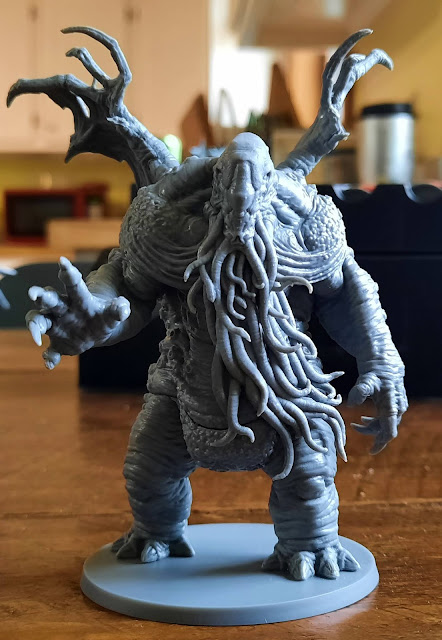 And finally, the big guy — Cthulhu. I painted a smaller version of Big C for last year's Monster May(hem) so I'll try to do the CMON version a bit differently. My only gripe with this figure is the stunted wings, but the rest of it is pretty awesome.

I haven't actually looked at the rules or any of the game components yet. The rulebook is so slim that it can't be that hard to play, but then again the last miniature-based game I played was WH40K back in the Rogue Trader era, when I would neglect to deploy my Terminators, forget about my Devastator squads despite placing them with tactical brilliance, and inevitably drop a couple of plastic Ultramarines on the floor. Then again, if I can get my head around rolling a D100 to see which bit of my Marine got shot, I can probably handle a 10-page rulebook.

So what's my take? The monsters are really well sculpted and molded, with minimal flash lines. They don't come on sprues so that removes a lot of tedious snipping and scraping, as well as the danger of cutting off a tentacle or three. Some figures do have gaps (see the star spawn's shoulder) so now I have to decide whether to dig out the greenstuff or just leave them, as they're not that noticeable. And many look to be absolute sods in terms of "how am I supposed to fit a paintbrush in there?" but I'll have to find a way around that.

The human figures are excellent and the inside box art has colour images of them, so it's not like I'll be doing my usual stuck-for-a-colour-scheme thing. I usually don't like having several minis in the same pose, like the cultists, Deep Ones and ghouls, but I'll just have to suck it up this time. I'm not looking forward to doing the yellow on Hastur's followers but I'm going to try a different technique so I don't end up with something that looks like this.

The first job with these is to head to the garage and spray them all with neutral grey primer. I want to use the airbrush on some of them to save time, but as I'm banned from airbrushing in the spare room I'll have to go to the little storage area behind our garage as for some reason it has electrical outlets while the garage doesn't.

I doubt very much that I'll get all 45 figures painted this month but I'll plod along and see what I can do.