Monster May(hem): Ghouls and Deep Ones 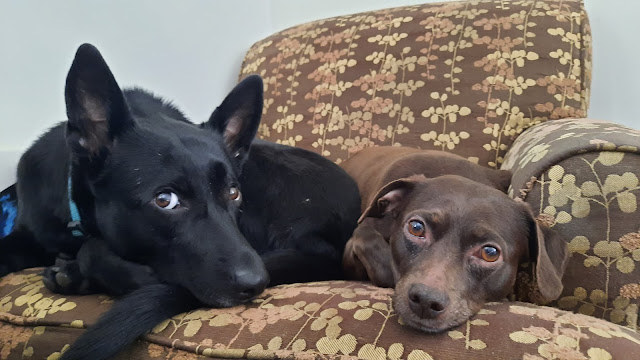 Oh crap, that's Erebus and Cadbury. My bad. Then again, having been stuck at home with them 24/7 for the past year, it's an easy mistake to make. 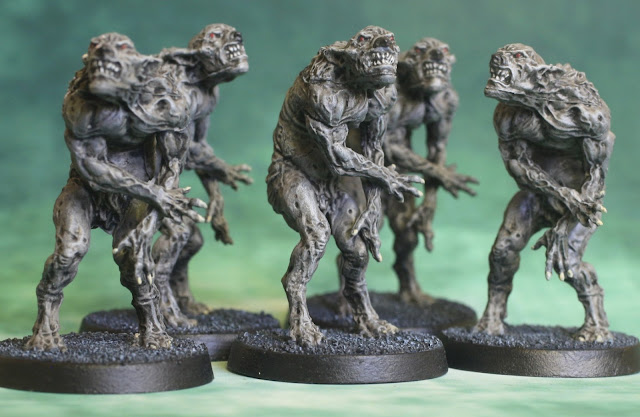 I've never really liked groups of single-pose minis, so I tried to make this shot of the ghouls look as if they're in a cemetery trying to work out where the cute goth chick went.

Ghouls make their first appearance in HP Lovecraft's "Pickman's Model". It's a short but effective story about Richard Pickman, an artist whose paintings are so grotesquely realistic that he's banned from every fashionable gallery in Boston. On visiting him, a friend hears odd noises coming from the cellar. Pickman goes to investigate, doesn't return, and the friend realises that Pickman's art is realistic because he bases them on photos of actual ghouls in the local graveyard.

Pickman returns in the longer story The Dream-Quest of Unknown Kadath, where it's revealed that he's part ghoul. If you want a different take, Caitlín R. Kiernan writes superb short stories about ghouls. 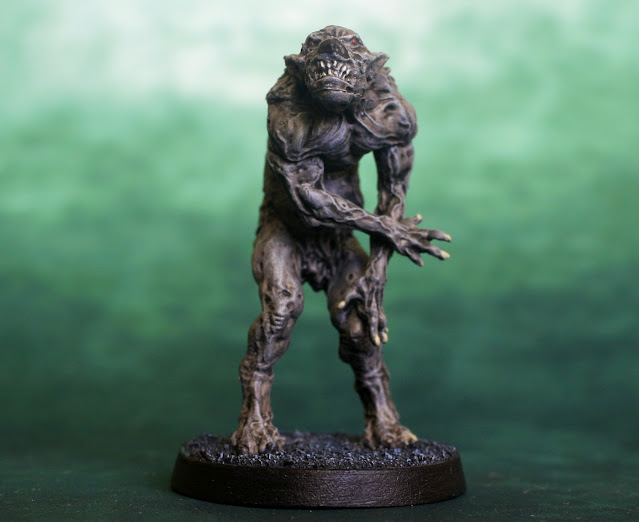 These chaps were top of my "blast through these as fast as possible" list so I worked on them all at once. The light grey primer was again too light (at least five of the bigger monsters are going to be resprayed dark grey or black) so I coated them all with Black Wash. While they dried I started on the Deep Ones, then returned to the ghouls and drybrushed them with Neutral, Ash and Ghost Greys. A dot of red for their eyes and some Bonewhite for their claws and I was the proud owner of my own ghoul pack.

As usual, the bases are sand drybrushed with Dark and Neutral greys. I washed them with Blue Tone to add a colour. 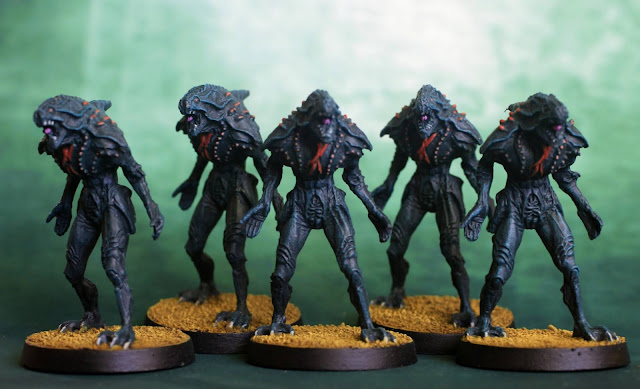 For god's sake no one mention chips, salt or vinegar TOO LATE THEY HEARD US RUN FOR IT

Deep Ones are the bad guys in The Shadow Over Innsmouth, which is by far one of Lovecraft's best stories and also proves he could write a pretty good action scene when needed. In a nutshell, a guy visits Innsmouth, a decaying port in New England. He notices that it's almost empty of people and those he sees look a bit off — bulging eyes, grey skin and what appear to be gills on their necks. The town drunk tells him the history of the place, he realises he needs to get out, ends up forced to stay overnight in a creepy hotel, and then shit gets real. It's a great read and I highly recommend it. 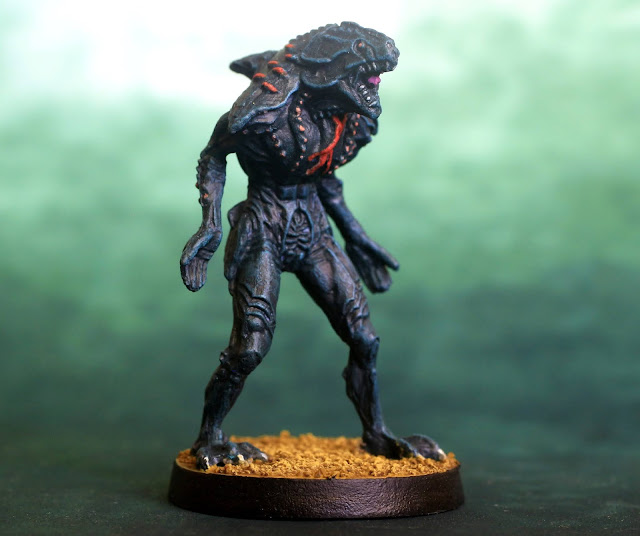 Once again the light grey primer didn't work, so I painted them over with the very apt Dark Sea Blue. I didn't bother with shading as the blue is deep enough. They were drybrushed by adding some Emerald Green to the blue in two stages. There's a lot more detail on the Deep Ones than the ghouls, so I decided to take a little more time over them by painting some of the bits in either Bright Orange or Heavy Orange. Some Pink for their tongues and Ivory for their teeth and claws and they were done.

Sand was the obvious choice for their bases, and as so often with this hobby I had to paint a real-world thing to make it look realistic. After a coat of WW2 Japanese Uniform and Burnt Umber wash, I highlighted it with Yellow Ochre. It wasn't bright enough so I did a second drybrush with Sun Yellow.

Completing all these chaps means I've done 23 Cthulhu: Death May Die figures and have 22 left. Go me!

Here's the other participants in this year's Monster May(hem):

Keith, who came up with this descent into insanity challenge, painted a superb Ripper Beast.

Dave from Wargames Terrain Workshop is still working on his krayt dragon from The Mandalorian.