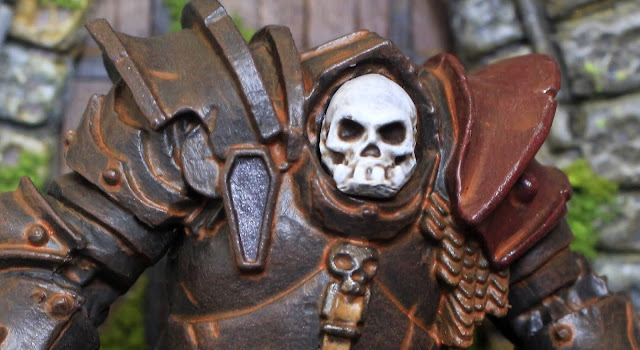 Much like Razmir, I don't know what "Maggotcrown" means. Reaper does a range of minis with that term so I'm assuming it's a setting or faction in a game. Whatever it is, it suits this hulking mountain of metal to a tee. In light of his intimidating size and menacing skull head, I've named him Tim.
Before we get started on the painting malarkey, here's what happens when you drop something on the floor and Erebus gets to it first: 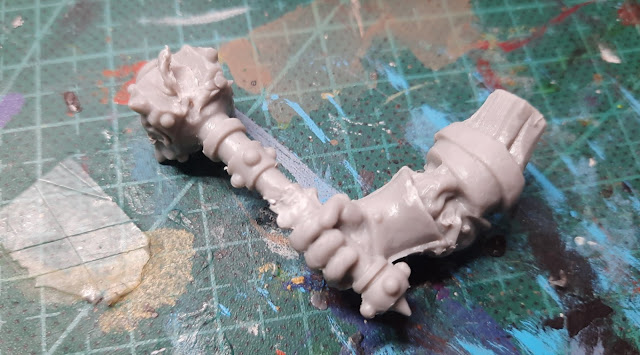 I fixed the handle with greenstuff and carved off the chewed bits of the head. Thanks to Erebus' fangs it looks like a weapon that's been used frequently and with gusto, so I didn't mind too much. At least she didn't eat it, which was the fate of a dragon I bought last year. Anyway, on with the painting malarkey. 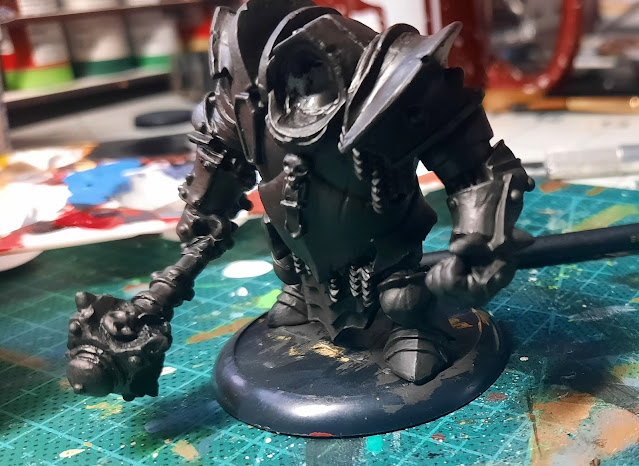 I wanted him Tim to have dark armour but for once not black or dark grey. I thought about dark red but couldn't work out how I'd highlight it, so I darkened some Chocolate Brown with Black and covered him in it. It actually looked pretty good, giving him a sort of aged, worn look with a light coat of dark rust. To highlight him I mixed more Black with Mahogany Brown and drybrushed it all over, then washed it with thinned Black Wash. You can just about see the result in this abysmal photo.
Having just done a rust-covered Terminator, I decided to go the same way with Tim to give him an even more ancient look. As he's a large figure I didn't want to use a ton of expensive Vallejo effects paints on him, so I made my own rust wash. 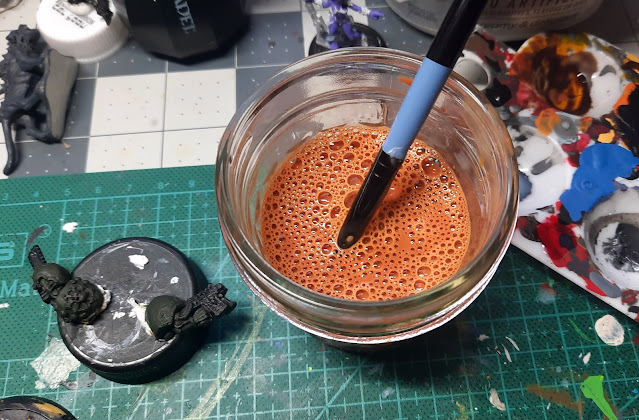 I've seen this used on a YouTube tutorial channel, although the guy never gives a recipe so I was left having to bullshit my way through it. I used plenty of Bright Orange and Light Orange, and added some Orange Brown, Light Brown, Black Red, a spot of Black and some matte medium. The other 95% is bottled water (Poland Spring, which seems to be the brand of choice here in the Northeast). Don't ask me the ratio of the paints I used; it could be 3 parts ninja to 1 part tomato for all I can remember.
Once I'd thoroughly shaken and stirred it into a dark orange colour, I liberally plastered him in it with an old size 7 brush. 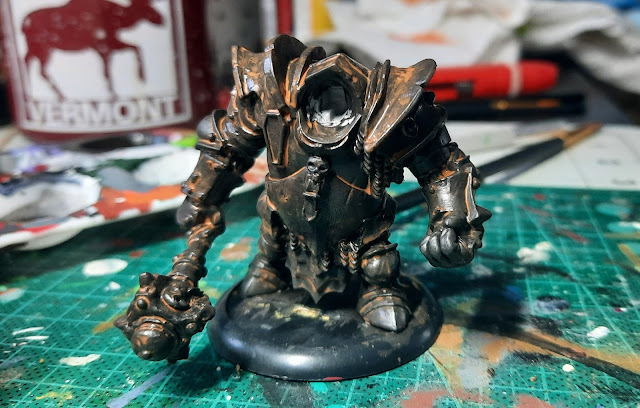 Here he is with a still-wet coat of the orange wash all over him. It dries a lot less opaque than it looks in this pic so I wasn't worried about him turning into Tim the Tangerine. Once the wash had dried, I painted his gloves Flat Earth and highlighted them with Light Brown.
He was a bit monochrome and I wanted to break up all the dark brown-black, so I went back to my idea of dark red and did his left shoulder guard and knee pad thing in Burnt Red. After that I used Oily Steel, Black Wash and more of the rust wash on his club and some Oily Steel on the skull below his chin. The leather strap below it, which I just realised looks a bit like a tie and now I can't see it as anything else, was painted to look like his gloves.
He's got a coffin-shaped thing on his left chest that's the same as one on my Dreadmere Wight, so I'm assuming they're part of the same society? I painted it in with some Red Tone mixed with Metallic Medium.
I added a few more dabs of rust to some bits that needed it, and he was done. 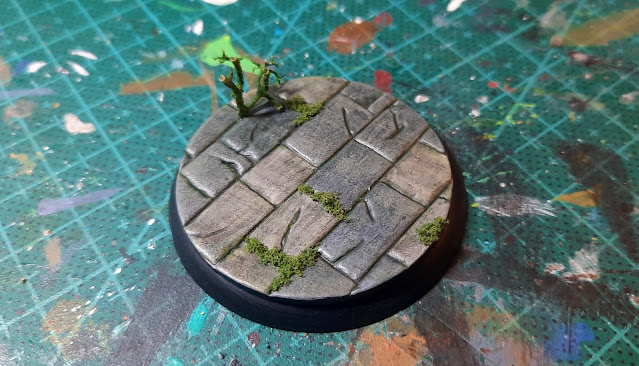 Tim comes with an separate cobbled base that you can lock his feet in to, but I decided to use one of my base toppers that looks like old flagstones. They're by British company Renedra, I got them at Brookhurst Hobbies back in 2018, and this is the first time I've used one. After gluing it to a 45mm base and painting it using a similar technique to my ruined chapel I added some flock and a bit of lichen. 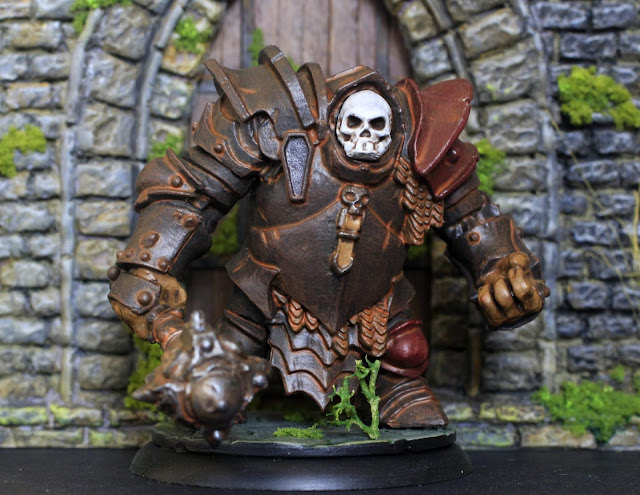 Here he is, complete with a head. Bone is not a colour I like to paint as I usually mess it up, so I gave his skull a coat of Off-White, shaded it with Umber Wash and highlighted it with White. I might give it a layer or two of Bonewhite at some point.
The homemade rust wash worked so well I wish I'd thought of it before doing my Death Guard Terminator. 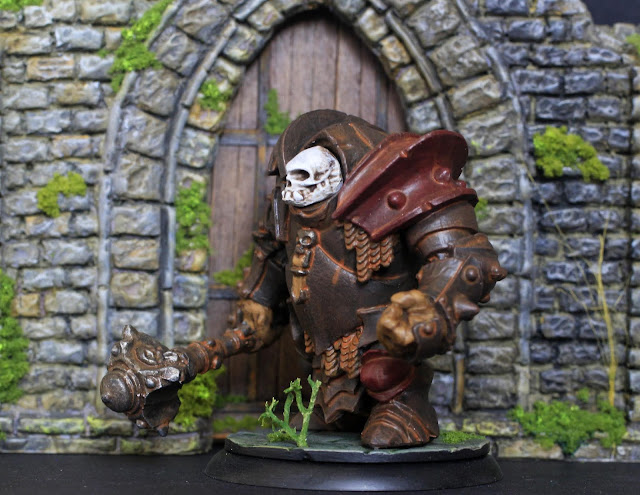 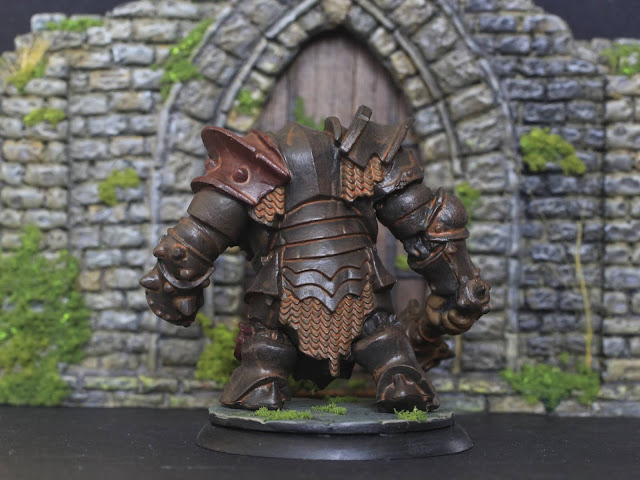 Judging by how often the juggernaut is out of stock on Reaper's site it's one of their very popular figures, and I'm not surprised; it's a great sculpt by Bobby Jackson and was fun to paint. 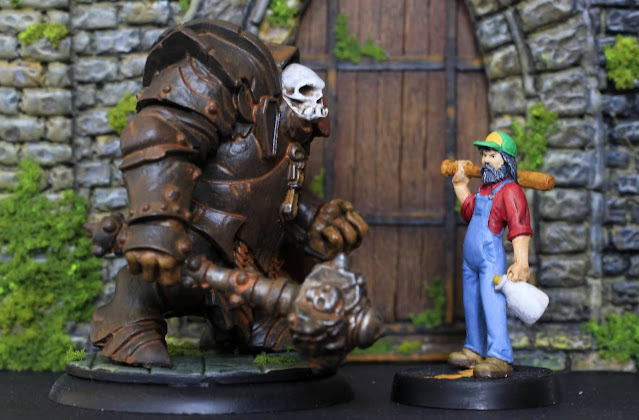 Tim really is a heckin' chonk. Here he is facing off against Billy Joe, who might be smaller but is armed with a baseball bat and powered by moonshine, resentment and conspiracy theories.
Labels: basing, fantasy, monster, reaper, vallejo